Khanty (or Hanti), previously known as Ostyak (/ˈɒstiæk/),[3] is the Uralic language spoken by the Khanty people. It is spoken in Khanty–Mansi and Yamalo-Nenets autonomous okrugs as well as in Aleksandrovsky and Kargosoksky districts of Tomsk Oblast in Russia. According to the 1994 Salminen and Janhunen study, there were 12,000 Khanty-speaking people in Russia.

The Khanty language has many dialects. The western group includes the Obdorian, Ob, and Irtysh dialects. The eastern group includes the Surgut and Vakh-Vasyugan dialects, which, in turn, are subdivided into thirteen other dialects. All these dialects differ significantly from each other by phonetic, morphological, and lexical features to the extent that the three main "dialects" (northern, southern and eastern) are mutually unintelligible.[4] Thus, based on their significant multifactorial differences, Eastern, Northern and Southern Khanty could be considered separate but closely related languages.

Cyrillic (version as of 2000)[citation needed] 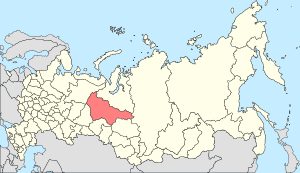 The Khanty written language was first created after the October Revolution on the basis of the Latin script in 1930 and then with the Cyrillic alphabet (with the additional letter ⟨ң⟩ for /ŋ/) from 1937. 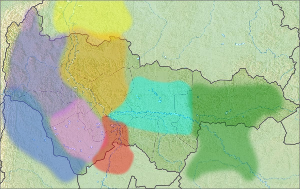 Khanty is divided in three main dialect groups, which are to a large degree mutually unintelligible, and therefore best considered three languages: Northern, Southern and Eastern. Individual dialects are named after the rivers they are or were spoken on. Southern Khanty is probably extinct by now.[5][6]

The Salym dialect can be classified as transitional between Eastern and Southern (Honti:1998 suggests closer affinity with Eastern, Abondolo:1998 in the same work with Southern). The Atlym and Nizyam dialects also show some Southern features.

Southern and Northern Khanty share various innovations and can be grouped together as Western Khanty. These include loss of full front rounded vowels: *üü, *öö, *ɔ̈ɔ̈ > *ii, *ee, *ää (but *ɔ̈ɔ̈ > *oo adjacent to *k, *ŋ),[8] loss of vowel harmony, fricativization of *k to /x/ adjacent to back vowels,[9] and the loss of the *ɣ phoneme.[10]

A general feature of all Khanty varieties is that while long vowels are not distinguished, a contrast between plain vowels (e.g. /o/) vs. reduced or extra-short vowels (e.g. /ŏ/) is found. This corresponds to an actual length distinction in Khanty's close relative Mansi. According to scholars who posit a common Ob-Ugric ancestry for the two, this was also the original Proto-Ob-Ugric situation.

Palatalization of consonants is phonemic in Khanty, as in most other Uralic languages. Retroflex consonants are also found in most varieties of Khanty.

Khanty word stress is usually on the initial syllable.[11]

A major consonant isogloss among the Khanty varieties is the reflexation of the lateral consonants, *ɬ (from Proto-Uralic *s and *š) and *l (from Proto-Uralic *l and *ð).[10] These generally merge, however with varying results: /l/ in the Obdorsk and Far Eastern dialects, /ɬ/ in the Kazym and Surgut dialects, and /t/ elsewhere. The Vasjugan dialect still retains the distinction word-initially, having instead shifted *ɬ > /j/ in this position. Similarly, the palatalized lateral *ľ developed to /lʲ/ in Far Eastern and Obdorsk, /ɬʲ/ in Kazym and Surgut, and /tʲ/ elsewhere. The retroflex lateral *ḷ remains in Far Eastern, but in /t/-dialects develops into a new plain /l/.

A similarly simple vowel inventory is found in the Nizyam, Sherkal, and Berjozov dialects, which have full /e a ɒ u/ and reduced /ĭ ɑ̆ ŏ ŭ/. Aside from the full vs. reduced contrast rather than one of length, this is identical to that of the adjacent Sosva dialect of Mansi.[12]

The Obdorsk dialect has retained full close vowels and has a nine-vowel system: full vowels /i e æ ɑ o u/ and reduced vowels /æ̆ ɑ̆ ŏ/).[12] It however has a simpler consonant inventory, having the lateral approximants /l lʲ/ in place of the fricatives /ɬ ɬʲ/ and having fronted *š *ṇ to /s n/.

The personal pronouns are, in the nominative case:

The cases of ma are accusative manət and dative manəm.

The demonstrative pronouns and adjectives are:

Khanty numerals, compared with Hungarian and Finnish, are:

The formation of multiples of ten shows Slavic influence in Khanty, whereas Hungarian uses the collective derivative suffix -van (-ven) closely related to the suffix of the adverbial participle which is -va (-ve) today but used to be -ván (-vén). Note also the regularity of [xot]-[haːz] "house" and [sot]-[saːz] "hundred".

Both Khanty and Mansi are basically nominative–accusative languages but have innovative morphological ergativity. In an ergative construction, the object is given the same case as the subject of an intransitive verb, and the locative is used for the agent of the transitive verb (as an instrumental) . This may be used with some specific verbs, for example "to give": the literal Anglicisation would be "by me (subject) a fish (object) gave to you (indirect object)" for the equivalent of the sentence "I gave a fish to you". However, the ergative is a morphological (marked using a case) only, not syntactic, so that, in addition, these may be passivized in a way resembling English. For example, in Mansi, "a dog (agent) bit you (object)" could be reformatted as "you (object) were bitten, by a dog (instrument)".

Khanty is an agglutinative language and employs an SOV order.[15]

The lexicon of the Khanty varieties is documented relatively well. The most extensive early source is Toivonen (1948), based on field records by K. F. Karjalainen from 1898–1901. An etymological interdialectal dictionary, covering all known material from pre-1940 sources, is Steinitz et al. (1966–1993).

Schiefer (1972)[16] summarizes the etymological sources of Khanty vocabulary, as per Steinitz et al., as follows:

Futaky (1975)[17] additionally proposes a number of loanwords from the Tungusic languages, mainly Evenki.

Retrieved from "http://en.turkcewiki.org/w/index.php?title=Khanty_language&oldid=952250824"
This website is a mirror of Wikipedia, and is not affiliated with the Wikimedia Foundation.
Categories:
Hidden categories: