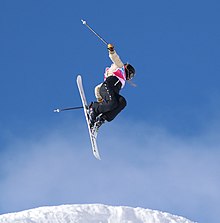 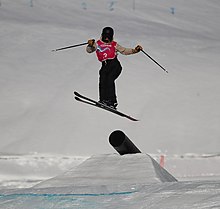 During the final at the very same place

During the Big Air competition of the 2017 Winter X Games Norway, Sildaru became the first woman to ever land a Switch 1260° Mute and a 1440° during a competition.[4]

Because of her young age, the first World Cup event she was allowed to participate in was on 27 August 2017 in Cardrona, New Zealand. She won the slopestyle competition.[5]

Despite being the gold medal favorite for the women’s slopestyle event in 2018 Winter Olympics, she missed competing in the Games because of a knee injury.[6]

However, in the 2020 Youth Olympic Games she won a gold medal for the Women's Freestyle Skiing.[7]

All results are sourced from the International Ski Federation (FIS).[8]

Retrieved from "http://en.turkcewiki.org/w/index.php?title=Kelly_Sildaru&oldid=977841811"
This website is a mirror of Wikipedia, and is not affiliated with the Wikimedia Foundation.
Categories:
Hidden categories: