Kashubian or Cassubian (Kashubian: kaszëbsczi jãzëk, Polish: język kaszubski) is a West Slavic lect belonging to the Lechitic subgroup along with Polish and Silesian.[3][4] Although often classified as a language in its own right, it is sometimes viewed as a dialect of Pomeranian or as a dialect of Polish.[5]

In Poland, it has been an officially recognized ethnic-minority language since 2005.[6] Approximately 108,000 people use mainly Kashubian at home.[7][8] It is the only remnant of the Pomeranian language. It is close to standard Polish with influence from Low German and the extinct Polabian (West Slavic) and Old Prussian (West Baltic) languages.[9]

Kashubian is assumed to have evolved from the language spoken by some tribes of Pomeranians called Kashubians, in the region of Pomerania, on the southern coast of the Baltic Sea between the Vistula and Oder rivers. The Pomeranians were said to have arrived before the Poles, and certain tribes managed to maintain their language and traditions despite German and Polish settlements. It first began to evolve separately in the period from the thirteenth to the fifteenth century as the Polish-Pomeranian linguistic area began to divide based around important linguistic developments centred in the western (Kashubian) part of the area.[10]

In the 19th century, Florian Ceynowa became Kashubian's first known activist. He undertook tremendous efforts to awaken Kashubian self-identity through the establishment of Kashubian language, customs, and traditions.[11] He felt strongly that Poles were born brothers and that Kashubia was a separate nation.[12]

The Young Kashubian movement followed in 1912, led by author and doctor Aleksander Majkowski, who wrote for the paper "Zrzësz Kaszëbskô" as part of the "Zrzëszincë" group. The group contributed significantly to the development of the Kashubian literary language.

The earliest printed documents in Polish with Kashubian elements date from the end of the 16th century. The modern orthography was first proposed in 1879.

Many scholars and linguists debate whether Kashubian should be recognized as a Polish dialect or separate language. From the diachronic view it is a distinct Lechitic West Slavic language, but from the synchronic point of view it is a Polish dialect.[13] Kashubian is closely related to Slovincian, while both of them are dialects of Pomeranian. Many linguists, in Poland and elsewhere, consider it a divergent dialect of Polish. Dialectal diversity is so great within Kashubian that a speaker of southern dialects has considerable difficulty in understanding a speaker of northern dialects. The spelling and the grammar of Polish words written in Kashubian, which is most of its vocabulary, is highly unusual, making it difficult for native Polish speakers to comprehend written text in Kashubian.[14]

Like Polish, Kashubian includes about 5% loanwords from German (such as kùńszt "art"). Unlike Polish, these are mostly from Low German and only occasionally from High German.[15] Other sources of loanwords include the Baltic languages.

The number of speakers of Kashubian varies widely from source to source, ranging from as low as 4,500 to the upper 366,000. In the 2011 census, over 108,000[7][8] people in Poland declared that they mainly use Kashubian at home, of these only 10 percent consider Kashubian to be their mother tongue, with the rest considering themselves to be native speakers of both Kashubian and Polish.[16] The number of people who can speak at least some Kashubian is higher, around 366,000.[17][18][19] All Kashubian speakers are also fluent in Polish. A number of schools in Poland use Kashubian as a teaching language. It is an official alternative language for local administration purposes in Gmina Sierakowice, Gmina Linia, Gmina Parchowo, Gmina Luzino and Gmina Żukowo in the Pomeranian Voivodeship. Most respondents say that Kashubian is used in informal speech among family members and friends.[20] This is most likely because Polish is the official language and spoken in formal settings.

During the Kashubian diaspora of 1855-1900, 115,700 Kashubians emigrated to North America, with around 15,000 emigrating to Brazil.[21] Among the Polish community of Renfrew County, Ontario, Kashubian is widely spoken to this day, despite the use of more formal Polish by parish priests.[22] In Winona, Minnesota, which Ramułt termed the "Kashubian Capital of America",[23] Kashubian was regarded as "poor Polish," as opposed to the "good Polish" of the parish priests and teaching sisters. Consequently, Kashubian failed to survive Polonization and died out shortly after the mid-20th century.[24] 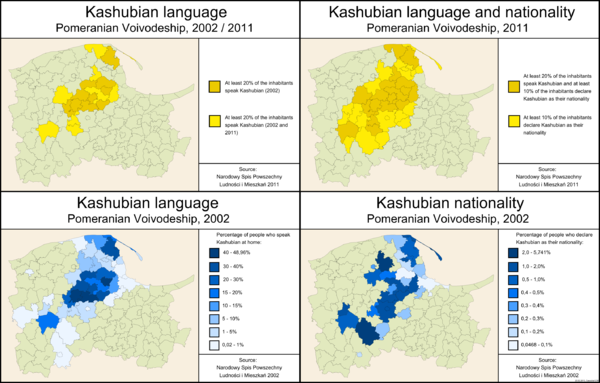 Important for Kashubian literature was Xążeczka dlo Kaszebov by Doctor Florian Ceynowa (1817–1881).[25] Hieronim Derdowski (1852–1902 in Winona, Minnesota) was another significant author who wrote in Kashubian, as was Dr. Aleksander Majkowski (1876–1938) from Kościerzyna, who wrote the Kashubian national epic The Life and Adventures of Remus. Jan Trepczyk was a poet who wrote in Kashubian, as was Stanisław Pestka. Kashubian literature has been translated into Czech, Polish, English, German, Belarusian, Slovene and Finnish. Aleksander Majkowski and Alojzy Nagel belong to the most commonly translated Kashubian authors of the 20th century. A considerable body of Christian literature has been translated into Kashubian, including the New Testament, much of it by Fr. Adam Ryszard Sikora (OFM).[26] Rev. Franciszek Grucza[27] graduated from a Catholic seminary in Pelplin. He was the first priest to introduce Catholic liturgy in Kashubian.

The earliest recorded artifacts of Kashubian date back to the 15th century and include a book of spiritual psalms that were used to introduce Kashubian to the Lutheran church:

The next few texts are also religious catechisms but this time from the Catholic Church, because the majority of Kashubians were Roman Catholic and these texts helped them become more unified in faith:

Throughout the communist period in Poland (1948-1989), Kashubian greatly suffered in education and social status. Kashubian was represented as folklore and prevented from being taught in schools. Following the collapse of communism, attitudes on the status of Kashubian have been gradually changing.[28] It has been included in the program of school education in Kashubia although not as a language of teaching or as a required subject for every child, but as a foreign language taught 3 hours per week at parents' explicit request. Since 1991, it is estimated that there have been around 17,000 students in over 400 schools who have learned Kashubian.[29] Kashubian has some limited usage on public radio and had on public television. Since 2005, Kashubian has enjoyed legal protection in Poland as an official regional language. It is the only language in Poland with that status, which was granted by the Act of 6 January 2005 on National and Ethnic Minorities and on the Regional Language of the Polish Parliament.[30] The act provides for its use in official contexts in ten communes in which speakers are at least 20% of the population.[31] The recognition means that heavily populated Kashubian localities have been able to have road signs and other amenities with Polish and Kashubian translations on them. 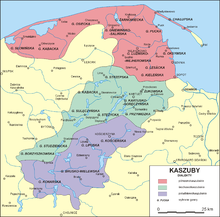 Friedrich Lorentz wrote in the early 20th century that there were three main Kashubian dialects. These include the

Other researches would argue that each tiny region of the Kaszuby has its own dialect, as in Dialects and Slang of Poland:[32]

A "standard" Kashubian language does not exist despite several attempts to create one; rather a diverse range of dialects takes its place. The vocabulary is heavily influenced by German and Polish and uses the Latin alphabet.

There are several similarities between Kashubian and Polish. For some linguists they consider this a sign that Kashubian is a dialect of Polish but others believe that this is just a sign that the two originate from the same location. They are nevertheless related to a certain degree and their proximity has made Kashubian influenced by Polish and its various dialects.

Exemplary differences between Kashubian and Polish:

Kashubian makes use of simplex and complex phonemes with secondary place articulation /pʲ/, /bʲ/, /fʲ/, /vʲ/ and /mʲ/. They follow the Clements and Hume (1995) constriction model, where sounds are represented in terms of constriction. They are then organized according to particular features like anterior, implying the activation of features dominating it. Due to this model, the phonemes above are treated differently from the phonemes /p/, /b/, /f/, /v/ and /m/. The vocalic place node would be placed under the C-place node and V-place nodes interpolated to preserve well-forwardness.[33]

The following digraphs and trigraphs are used:

(All people are born free and equal in their dignity and rights. They are given reason and conscience and they shall create their relationships to one another according to the spirit of brotherhood.)[35]

Kashubian languageat Wikipedia's sister projects
Retrieved from "http://en.turkcewiki.org/w/index.php?title=Kashubian_language&oldid=1023127231"
This website is a mirror of Wikipedia, and is not affiliated with the Wikimedia Foundation.
Categories:
Hidden categories: