The Karelian language is spoken in Russia, mostly in the Karelian Republic and in a small region just north of Tver, though most residents there were expelled in 1939. Karelian has seen numerous proposed and adopted alphabets over the centuries, both Latin and Cyrillic. In 2007, the current standardized Karelian alphabet was introduced and is used to write all varieties of Karelian, with the exception of Tver Karelian.

The oldest known document in Karelian, or in any Finnic language, is the Birch bark letter no. 292, found in 1957 and believed to be either an invocation against lightning, or an oath. Until the 19th century it is believed that Karelian was only written down by individuals; it was not taught in schools.

Translation of Matthew into Karelian, 1820

In the 19th century a few books were published in Karelian using Cyrillic, the first known one was A Translation of some Prayers and a Shortened Catechism into North Karelian and Olonets (Aunus) dialects in 1804. Karelian literature in 19th century Russia remained limited to a few primers, songbooks and leaflets.[1]

Tver State University Finno-Ugricist Lyudmila Georgievna Gromova points out in one great difficulty in these early Karelian Cyrillic alphabets, was the inconsistency in rendering the sounds a, ä, ja, jä, ö, jö, y, and jy. For example, in the 1820 translation of Matthew, "я" might represent the sound ä, ja, or jä.[2]

In 1921, the first all-Karelian congress under the Soviet regime debated between Finnish and Karelian should be the official language (next to Russian of course) of the new "Karelian Labour Commune", which two years later would become the Karelian ASSR. In the end they chose Finnish over Karelian.

Nonetheless, some publishing continued in Cyrillic. The research into Karelian folklore of Maria Mikhailovskaya Bezhetsky, a teacher from the Vozdvizhenskaya school district, was published in 1925. In August–December 1929, the newspaper Tverskaya Derevnya (Tver Village), printed in Cyrillic, became the first newspaper ever published in the Karelian language.[3]

In 1930-31, a Karelian literary language using the Latin alphabet was standardized for the Tver Karelian community, south of the Karelian ASSR and north of Tver, with the following alphabet:[4]

Note the additional letters borrowed from Cyrillic: з (/dž/) and ь, as well as the unusual Latin ƶ and ȷ (j without dot). 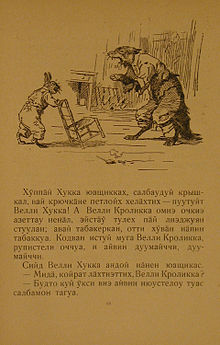 In 1937 the government wished to replace the use of Finnish (in the Karelian ASSR) and Karelian written in Latin (in the Tver Region), with a single standard Karelian language written in Cyrillic. Two proposals were sourced.[5]

However, in the end a proposal was adopted with fewer non-standard Cyrillic letters: it included the entire Russian alphabet plus the letters Ӓ, Ӧ, and Ӱ.

On September 8, 1937, at the proposal of its chairman, M.I. Kalinin, the Presidium of the Central Executive Committee discussed the Cyrillization of the Karelian language. The final orthography was approved by the Karelian Regional Committee on February 10, 1938 and published in the newspaper "Karel'skaya Pravda". On February 14, the RSFSR People's Commissariat issued decree no. 214, introducing the single Karelian language in the Cyrillic alphabet.[3]

From 1937-39 the Soviet government used the new Karelian standard language written in Cyrillic in both the Karelian SSR and Tver Region.[1]

During this period Sovetskoi Karelija was written in Karelian using Cyrillic, rather than in Finnish.

The effort was dropped in 1940 and Finnish (written as always in the Latin alphabet) once again became an official language of the Karelian SSR, while in the Tver region most Karelians were expelled in 1939 and Karelian was banned there.[1] The reason for abandoning Cyrillic, and the Karelian language itself, as the national language of the republic may have two explanations:

In the Olonets Karelian alphabet, the letter Ǯ was used instead of the digraph Dž to mark the voiced affricate. For example, the word mandžoi (strawberry) was written manǯoi. For the computers used in those days, the letter ǯ was problematic, and in many cases it had to be inserted manually afterwards.[9] The letter Ü represented the same vowel sound as the letter Y used in the modern alphabet.

The modern unified Karelian alphabet is a used to write all variants of the Karelian language except Tver Karelian. It consists of a total of twenty-eight characters: twenty-two are from the ISO basic Latin alphabet, five are derived from basic Latin letters by the addition of diacritical marks, and the final character is the apostrophe, which signifies palatalization of the preceding sound. The entire range of sounds of native Karelian words is intended to be represented by this set of characters.[needs IPA]

This unified alphabet was approved in 2007 as a replacement for the separate Olonets Karelian and Karelian Proper alphabets.[9] The letters Ä and Ö are vowels which, unlike the German umlauts, are considered to be distinct and are alphabetized separately from the corresponding vowels without the umlauts.[11] The postalveolar consonants Č, Š and Ž can be replaced by the digraphs Ch, Sh and Zh when writing the caron is impossible or inconvenient—for example ruočči (Swedish) may be written as ruochchi.[12]

On May 29, 2014, the letter C was added to the unified alphabet. The letter may be used in Ludic Karelian native words and is allowed for use in loanwords in Livvi Karelian and in Karelian proper.[13]

Retrieved from "http://en.turkcewiki.org/w/index.php?title=Karelian_alphabet&oldid=957246730"
This website is a mirror of Wikipedia, and is not affiliated with the Wikimedia Foundation.
Categories:
Hidden categories: