Jump to navigation Jump to search
Dialect of Turkish language
Not to be confused with Old Anatolian Turkish. 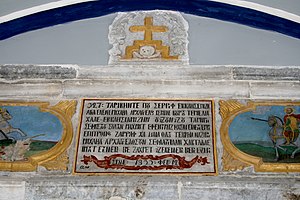 An inscription in Karamanlı Turkish on the entrance of the former Greek Orthodox church of Agia Eleni in Sille, near Konya.

Karamanlı Turkish (Turkish: Karamanlı Türkçesi, Greek: Καραμανλήδικα, romanized: Karamanlídika) is both a form of written Turkish and a dialect of Turkish spoken by the Karamanlides, a community of Turkish-speaking Orthodox Christians in Ottoman Turkey. The official Ottoman Turkish was written in the Arabic script, but the Karamanlides used the Greek alphabet to write their form of Turkish. Karamanlı Turkish had its own literary tradition and produced numerous published works in print during the 19th century, some of them published by Evangelinos Misailidis by the Anatoli or Misailidis publishing house.[1]

Karamanlı writers and speakers were expelled from Turkey as part of the Greek-Turkish population exchange in 1923. Some speakers preserved their language in the diaspora. The written form stopped being used immediately after Turkey adopted the Latin alphabet.

A fragment of a manuscript written in Karamanlı was also found in the Cairo Geniza.[2]

There was a Karamanli Turkish newspaper, Anatoli, published from 1850 to 1922,[4] made by Evangelinos Misailidis. Other publications in Karamanli were Anatol Ahteri, Angeliaforos, Angeliaforos coçuklar içun, Şafak, and Terakki. The second and third were created by the American Board of Commissioners for Foreign Missions. Demetrius Nicolaides also applied to make his own Karamanli publication, Asya ("Asia"), but was denied; he instead made an Ottoman Turkish newspaper called Servet. Evangelina Baltia and Ayșe Kavak, authors of "Publisher of the newspaper Konstantinoupolis for half a century," wrote that they could find no information explaining why Nicolaides' proposal was turned down.[5]

Retrieved from "http://en.turkcewiki.org/w/index.php?title=Karamanli_Turkish&oldid=1041424342"
This website is a mirror of Wikipedia, and is not affiliated with the Wikimedia Foundation.
Categories:
Hidden categories: