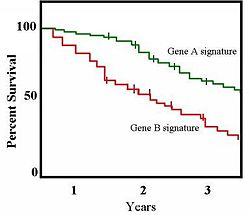 An example of a Kaplan–Meier plot for two conditions associated with patient survival.

The Kaplan–Meier estimator,[1][2] also known as the product limit estimator, is a non-parametric statistic used to estimate the survival function from lifetime data. In medical research, it is often used to measure the fraction of patients living for a certain amount of time after treatment. In other fields, Kaplan–Meier estimators may be used to measure the length of time people remain unemployed after a job loss,[3] the time-to-failure of machine parts, or how long fleshy fruits remain on plants before they are removed by frugivores. The estimator is named after Edward L. Kaplan and Paul Meier, who each submitted similar manuscripts to the Journal of the American Statistical Association. The journal editor, John Tukey, convinced them to combine their work into one paper, which has been cited about 57,000 times since its publication.[4][5]

The estimator of the survival function

(the probability that life is longer than

a time when at least one event happened, di the number of events (e.g., deaths) that happened at time

A plot of the Kaplan–Meier estimator is a series of declining horizontal steps which, with a large enough sample size, approaches the true survival function for that population. The value of the survival function between successive distinct sampled observations ("clicks") is assumed to be constant.

An important advantage of the Kaplan–Meier curve is that the method can take into account some types of censored data, particularly right-censoring, which occurs if a patient withdraws from a study, is lost to follow-up, or is alive without event occurrence at last follow-up. On the plot, small vertical tick-marks indicate individual patients whose survival times have been right-censored. When no truncation or censoring occurs, the Kaplan–Meier curve is the complement of the empirical distribution function.

In order to generate a Kaplan–Meier estimator, at least two pieces of data are required for each patient (or each subject): the status at last observation (event occurrence or right-censored) and the time to event (or time to censoring). If the survival functions between two or more groups are to be compared, then a third piece of data is required: the group assignment of each subject.[6]

be a random variable, which we think of as the time until an event of interest takes place. As indicated above, the goal is to estimate the survival function

. Recall that this function is defined as

be independent, identically distributed random variables, whose common distribution is that of

is the random time when some event

happened. The data available for estimating

is a fixed, deterministic integer, the censoring time of event

. In particular, the information available about the timing of event

is whether the event happened before the fixed time

and if so, then the actual time of the event is also available. The challenge is to estimate

Derivation of the Kaplan–Meier estimator[edit]

Here, we show two derivations of the Kaplan–Meier estimator. Both are based on rewriting the survival function in terms of what is sometimes called hazard, or mortality rates. However, before doing this it is worthwhile to consider a naive estimator.

To understand the power of the Kaplan–Meier estimator, it is worthwhile to first describe a naive estimator of the survival function.

. A basic argument shows that the following proposition holds:

Proposition 1: If the censoring time

if and only if

. It follows from the above proposition that

and consider only those

, i.e. the events for which the outcome was not censored before time

be the number of elements in

. Note that the set

is not random and so neither is

is a sequence of independent, identically distributed Bernoulli random variables with common parameter

, this suggests to estimate

where the last equality follows because

The quality of this estimate is governed by the size of

. This can be problematic when

is small, which happens, by definition, when a lot of the events are censored. A particularly unpleasant property of this estimator, that suggests that perhaps it is not the "best" estimator, is that it ignores all the observations whose censoring time precedes

: For example, when for many events with

also holds, we can infer that events often happen early, which implies that

is large, which, through

must be small. However, this information is ignored by this naive estimator. The question is then whether there exists an estimator that makes a better use of all the data. This is what the Kaplan–Meier estimator accomplishes. Note that the naive estimator cannot be improved when censoring does not take place; so whether an improvement is possible critically hinges upon whether censoring is in place.

where the one but last equality used that

is integer valued and for the last line we introduced

By a recursive expansion of the equality

is estimated based on the data and the estimator of

is obtained as a product of these estimates.

It remains to specify how

is to be estimated. By Proposition 1, for any

both hold. Hence, for any

By a similar reasoning that lead to the construction of the naive estimator above, we arrive at the estimator

). The Kaplan–Meier estimator is then given by

The form of the estimator stated at the beginning of the article can be obtained by some further algebra. For this, write

where, using the actuarial science terminology,

is the number of known deaths at time

is the number of those persons who are alive at time

. This implies that we can leave out from the product defining

, we arrive at the form of the Kaplan–Meier estimator given at the beginning of the article:

As opposed to the naive estimator, this estimator can be seen to use the available information more effectively: In the special case mentioned beforehand, when there are many early events recorded, the estimator will multiply many terms with a value below one and will thus take into account that the survival probability cannot be large.

Derivation as a maximum likelihood estimator[edit]

Kaplan–Meier estimator can be derived from maximum likelihood estimation of hazard function.[7] More specifically given

as the number of events and

the total individuals at risk at time

. Then survival rate can be defined as:

and the likelihood function for the hazard function up to time

finding the maximum of log likelihood with respect to

where hat is used to denote maximum likelihood estimation. Given this result, we can write:

The Kaplan–Meier estimator is one of the most frequently used methods of survival analysis. The estimate may be useful to examine recovery rates, the probability of death, and the effectiveness of treatment. It is limited in its ability to estimate survival adjusted for covariates; parametric survival models and the Cox proportional hazards model may be useful to estimate covariate-adjusted survival.

The Kaplan–Meier estimator is a statistic, and several estimators are used to approximate its variance. One of the most common estimators is Greenwood's formula:[8]

is the number of cases and

is the total number of observations, for

For a mathematical derivation of the equation above, click on "show" to reveal

Greenwood formula is derived[9] by noting that probability of getting

. As a result for maximum likelihood hazard rate

. To avoid dealing with multiplicative probabilities we compute variance of logarithm of

and will use the delta method to convert it back to the original variance:

using martingale central limit theorem, it can be shown that the variance of the sum in the following equation is equal to the sum of variances:[9]

as a result we can write:

using the delta method once more:

In some cases, one may wish to compare different Kaplan–Meier curves. This can be done by the log rank test, and the Cox proportional hazards test.

Other statistics that may be of use with this estimator are the Hall-Wellner band[10] and the equal-precision band.[11]

Retrieved from "http://en.turkcewiki.org/w/index.php?title=Kaplan–Meier_estimator&oldid=967988817"
This website is a mirror of Wikipedia, and is not affiliated with the Wikimedia Foundation.
Categories:
Hidden categories: