Kagemusha (影武者, Shadow Warrior) is a 1980 jidaigeki film directed by Akira Kurosawa. In Japanese, kagemusha is a term used to denote a political decoy. It is set in the Sengoku period of Japanese history and tells the story of a lower-class criminal who is taught to impersonate a dying daimyō to dissuade opposing lords from attacking the newly vulnerable clan. The daimyō is based on Takeda Shingen, and the film ends with the climactic 1575 Battle of Nagashino.[5]

The film won the Palme d'Or at the 1980 Cannes Film Festival. It was also nominated for the Academy Award for Best Foreign Language Film and received other honours.

In Japan's Sengoku period, Takeda Shingen, daimyō of the Takeda clan, meets with his brother Nobukado, and an unnamed thief whom the latter met by chance and spared from crucifixion due to the thief's uncanny resemblance to Shingen. The brothers then agree that he would prove useful as a double, and they decide to use the thief as a kagemusha, a political decoy. Later, Shingen's army has besieged a castle of Tokugawa Ieyasu. One evening when Shingen visits the battlefield he is shot by a sniper who has mapped Shingen's previous movements in the camp. Mortally wounded, he orders a withdrawal and commands his generals to keep his death a secret for three years. Shingen soon dies with only a small group of witnesses. Meanwhile, Shingen's rivals Oda Nobunaga, Tokugawa Ieyasu, and Uesugi Kenshin each contemplate the consequences of Shingen's withdrawal of his army still not knowing of his death.

Nobukado presents the thief to Shingen's generals, proposing to have this kagemusha impersonate Shingen full-time. At first, even the thief is unaware of Shingen's death, until he tries to break into a huge jar, believing it to contain treasure, and instead finds Shingen's preserved corpse. The generals then decide they cannot trust the thief and set him free. Later, the Takeda leaders secretly drop the jar with Shingen's corpse into Lake Suwa. Spies working for Tokugawa and his ally Oda witness the disposal of the jar and, suspecting that Shingen has died, go to report the death. The thief, however, overhearing the spies, goes to offer his services, hoping to be of some use to Shingen in death. The Takeda clan preserves the deception by announcing that they were making an offering of sake to the god of the lake. The spies follow the Takeda army as they march home from the siege. Although they suspect that Shingen has died, they are later convinced by the kagemusha's performance.

Returning home, the kagemusha successfully fools Shingen's retinue. By imitating Shingen's gestures and learning more about him, the kagemusha begins to uncannily mimic the persona of Shingen, and even convinces Takeda Katsuyori's son and Shingen's grandson, who was very close with Shingen. When the kagemusha must preside over a clan council to plan how to respond to provocative attacks made by Tokugawa against Takeda border castles, he is instructed by Nobukado to not speak until Nobukado brings the generals to a consensus, whereupon the kagemusha will simply agree with the generals' plan and dismiss the council. However, Katsuyori is incensed by his father's decree of the three year subterfuge, which delays his inheritance and leadership of the clan. Katsuyori thus decides to test the kagemusha in front of the council, as the majority of the attendants are not aware that Shingen is dead. Katsuyori directly asks the kagemusha what course of action the "lord thinks" should be taken. After a long pause, the kagemusha replies, "A mountain does not move," convincingly in Shingen's own manner. The kagemusha's effective improvisation further impresses the generals.

Soon, in 1573, Oda Nobunaga is mobilizing his forces to attack Azai Nagamasa, continuing his campaign in central Honshu to maintain his control of Kyoto against the growing opposition. When the Tokugawa and Oda clans launch an attack on Takeda territory, Katsuyori begins a counter-offensive against the advice of other generals. The kagemusha is forced to lead reinforcements to the 1574 Battle of Takatenjin, and helps inspire the troops to victory. In a fit of overconfidence, the kagemusha attempts to ride Shingen's spirited horse. When he falls off, those who rush to help him see that he does not have their lord's battle scars, and he is revealed as an impostor. The thief is driven out of the palace in disgrace, and Katsuyori takes over the clan. Oda and Tokugawa, sensing weakness in the Takeda clan leadership, are emboldened to begin a full-scale offensive into the Takeda homeland.

Now in full control of the Takeda army, Katsuyori leads the counter-offensive against Nobunaga, resulting in the Battle of Nagashino. Although courageous in their assault, wave after wave of attacking Takeda cavalry and infantry are cut down by volleys of tanegashima fire from Oda troops deployed behind wooden stockades, effectively eliminating the Takeda army. The exiled kagemusha, who has followed the Takeda army, is dismayed and in a final show of loyalty, he takes up a spear and makes a hopeless charge against the Oda lines. Mortally wounded, the kagemusha attempts futilely to retrieve the fūrinkazan banner, which had fallen into a river, but succumbs to his wounds in the water. His body floats past it as the film concludes with a long shot of the abandoned fūrinkazan. 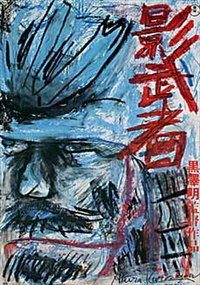 George Lucas and Francis Ford Coppola are credited at the end of the film as executive producers in the international version. This is because they convinced 20th Century Fox to make up a shortfall in the film's budget when the original producers, Toho Studios, could not afford to complete the film. In return, 20th Century Fox received the international distribution rights to the film.

Kurosawa originally cast the actor Shintaro Katsu in the title role. Katsu left the production, however, before the first day of shooting was over; in an interview for the Criterion Collection DVD, executive producer Coppola states that Katsu angered Kurosawa by arriving with his own camera crew to record Kurosawa's filmmaking methods. It is unclear whether Katsu was fired or left of his own accord, but he was replaced by Tatsuya Nakadai, a well-known actor who had appeared in a number of Kurosawa's previous films. Nakadai played both the kagemusha and the lord whom he impersonated.

Kurosawa wrote a part in Kagemusha for his longtime regular actor Takashi Shimura, and Kagemusha was the last Kurosawa film in which Shimura appeared. However, the scene in which he plays a servant who accompanies a western doctor to a meeting with Shingen was cut from the foreign release of the film. The Criterion Collection DVD release of the film restored this scene as well as approximately another eighteen minutes in the film.

According to Lucas, Kurosawa used 5,000 extras for the final battle sequence, filming for a whole day, then he cut it down to 90 seconds in the final release. Many beautiful special effects, and a number of scenes that filled holes in the story, landed on the "cutting-room floor".

Kagemusha won numerous honours in Japan and abroad, marking the beginning of Kurosawa's most successful decade in international awards, the 1980s.[7] At the 1980 Cannes Film Festival, Kagemusha shared the Palme d'Or with All That Jazz.[8] Kagemusha was nominated for two Academy Awards: (Best Art Direction (Yoshirō Muraki) and Best Foreign Language Film).[9][10]

Retrieved from "http://en.turkcewiki.org/w/index.php?title=Kagemusha&oldid=945150891"
This website is a mirror of Wikipedia, and is not affiliated with the Wikimedia Foundation.
Categories:
Hidden categories: