Johnston Press plc was a multimedia company founded in Falkirk, Scotland, in 1767.[2][3] Its flagship titles included UK-national newspaper the i, The Scotsman, the Yorkshire Post, the Falkirk Herald, and Belfast's The News Letter. The company was operating around 200 newspapers and associated websites around the United Kingdom and the Isle of Man when it went into administration in 2018.[4] The Falkirk Herald was the company's first acquisition in 1846. Johnston Press's assets were transferred to JPIMedia in 2018, who continued to publish its titles.[3] 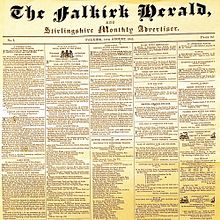 The first edition of the Falkirk Herald (1845), Johnston's first acquisition in 1846

Johnston owned many local and regional newspapers across the UK, such as the Yorkshire Evening Post

Johnston acquired one of Scotland's national titles, The Scotsman, in 2006

The Johnston family business was involved in printing from 1797, originally in Falkirk.[7] It bought control of its first newspaper, the Falkirk Herald, in 1846. The company would remain headquartered in Falkirk for the next 150 years. The family publishing company was renamed F Johnston & Co Ltd in 1882, a title it would retain until it was floated on the London Stock Exchange as Johnston Press (LSE: JPR) in 1988.[2]

The company's first major acquisition came in 1970, when it took control of the Fife-based publishers Strachan & Livingston.[2] In 1978, it bought Wilfred Edmunds Ltd in Chesterfield, publisher of the Derbyshire Times and The Yorkshire Weekly Newspaper Group in Wakefield.[2] The Company bought The West Sussex County Times in 1988, The Halifax Evening Courier in 1994 and the newspaper interests of EMAP plc in 1996.[2] Further expansion followed with Portsmouth & Sunderland Newspapers in 1999 and Regional Independent Media Holdings in 2002.[2]

The Company expanded into the Irish market in 2005 by purchasing Local Press Ltd, a company owned by 3i (£65 million),[8] the newspaper assets of Scottish Radio Holdings, known as Score Press with forty-five titles in Scotland and Ireland (£155 million),[9] and the Leinster Leader Group (€138.6 million).[10]

Johnston Press acquired The Scotsman Publications in 2006, taking ownership of two of Scotland's major national broadsheet titles, The Scotsman and Scotland on Sunday, as well as two local papers, the Edinburgh Evening News and the Edinburgh Herald & Post.[11]

In 2014, Iconic Newspapers acquired Johnston Press' titles in the Republic of Ireland.[12] In March of that year, Johnston Press launched a digital advertising agency called 1XL, in partnership with a number of other media companies including Local World and Newsquest.[13]

In February 2016, the company announced it was buying i newspaper for £24m.[14] The deal to buy i was completed on 10 April 2016, giving Johnston Press a daily print circulation of over 600,000 newspapers and an audience online and in print of almost 32 million people.[15] In July 2016 Johnston Press sold off its three titles on the Isle of Man — the Isle of Man Examiner, the Isle of Man Courier and the Manx Independent — to Tindle Newspapers in a deal worth £4.25m.[16] In January 2017 Johnston sold off a further 13 titles covering the East Midlands and East Anglia (including the Stamford Mercury) to Iliffe Media for £17m. The same month, the company also won a contract from Associated Newspapers (ANL) to print the Monday-to-Saturday issues of the Daily Mail newspaper at Johnston's Portsmouth Web facility in Hampshire, following the closure of ANL's printing site at Didcot.[17]

In October 2018, with debts of around £200m and a market capitalisation of £3m, the company announced that it had put itself up for sale.[18] On 16 November 2018, the group announced it was filing for administration, intending to then sell the assets to its lenders.[19] Johnson Press in a statement added there was no longer any value in its shares, in a major blow to Christen Ager-Hanssen, the chief executive of Custos Group, which was the largest shareholder at 25 percent. The company agreed a pre-packaged administration whereby Johnston Press's businesses and assets would be sold to a group of companies controlled by its creditors. Those included GoldenTree Asset Management, the largest creditor with about £70m of bonds.[6][20]

On 17 November 2018, a spokesperson for Johnston Press announced that all its titles had been transferred to the control of JPIMedia, a special purpose vehicle (SPV), owned by the creditors. Under the terms of the pre-packaged deal, ownership passed to a consortium of four lenders – CarVal, Fidelity, Benefit Street Partners and Goldentree Asset Management – who reduced its debts to £85 million and injected £35 million investment.[3] This however was subject to criticism by Johnston Press's largest shareholder, described as a "blatant pre-planned corporate theft by bondholders", and was raised in Parliament.[21]

The following is a partial list of British newspapers once owned by the company:

JPIMedia publishes a total of 22 titles in Northern Ireland through two holding companies, JPIMedia NI and Derry Journal Newspapers. The geographic readership of some titles extends across the Irish border into the Republic of Ireland, such as the Derry Journal which also covers County Donegal. Former JPIMedia titles published in the Republic of Ireland now belong to Iconic Newspapers.[12]

The company owns the following websites, in addition to newspaper sites as above, and regionalised versions of these:

Retrieved from "http://en.turkcewiki.org/w/index.php?title=Johnston_Press&oldid=962309617"
This website is a mirror of Wikipedia, and is not affiliated with the Wikimedia Foundation.
Categories:
Hidden categories: