Jump to navigation Jump to search
Not to be confused with John Common.

John Rogers Commons (October 13, 1862 – May 11, 1945) was an American institutional economist, Georgist, progressive and labor historian at the University of Wisconsin–Madison.[1]

John R. Commons was born in Hollansburg, Ohio on October 13, 1862. Commons had a religious upbringing which led him to be an advocate for social justice early in life. Commons was considered a poor student and suffered from a mental illness while studying. He was allowed to graduate without finishing because of the potential seen in his intense determination and curiosity. At this time, Commons became a follower of Henry George's 'single tax' economics.[2] He carried this 'Georgist' or 'Ricardian' approach to economics, with a focus on land and monopoly rents, throughout the rest of his life, including a proposal for income taxes with higher rates on land rents.[3][4][5][6][7]

After graduating from Oberlin College, Commons did two years of graduate studies at Johns Hopkins University, where he studied under Richard T. Ely,[8] but left without a degree.[9][10] After appointments at Oberlin and Indiana University, Commons began teaching at Syracuse University in 1895.[11]

In spring 1899, Syracuse dismissed him as a radical.[12] Eventually Commons re-entered academia at the University of Wisconsin in 1904.[8]

Commons' early work exemplified his desire to unite Christian ideals with the emerging social sciences of sociology and economics. He was a frequent contributor to Kingdom magazine, was a founder of the American Institute for Christian Sociology, and authored a book in 1894 called Social Reform and the Church.[13] He was an advocate of temperance legislation and was active in the national Prohibition Party.[13] By his Wisconsin years, Commons' scholarship had become less moralistic and more empirical, and he moved away from a religious viewpoint in his ethics and sociology.[14] 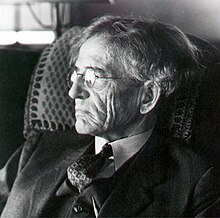 John R. Commons at his desk at the University of Wisconsin in the 1920s.

Commons is best known for developing an analysis of collective action by the state and other institutions, which he saw as essential to understanding economics. Commons believed that carefully crafted legislation could create social change; that view led him to be known as a socialist radical and incrementalist. Contrary to some published accounts, Commons did consider African Americans capable of voting. When he advocated proportional representation, he suggested a "negro party".[15] He even suggested applying the Thirteenth amendment to the Constitution to force Southern States to allow African Americans to vote.[16] He continued the strong American tradition in institutional economics by such figures as the economist and social theorist Thorstein Veblen. His notion of transaction is one of the most important contribution to Institutional Economics.[17] The institutional theory was closely related to his remarkable successes in fact-finding and drafting legislation on a wide range of social issues for the state of Wisconsin. He drafted legislation establishing Wisconsin's worker's compensation program, the first of its kind in the United States.

Commons was a contributor to The Pittsburgh Survey, a 1907 sociological investigation of a single American city. His graduate student, John A. Fitch, wrote The Steel Workers, a classic depiction of a key industry in early 20th-century America. It was one of six key texts to come out of the survey. Edwin E. Witte, later known as the "father of social security" also did his PhD at the University of Wisconsin–Madison under Commons.

He was a leading advocate of proportional representation in the United States, writing a book on the subject in 1907 and serving as vice-president of the Proportional Representation League.[20]

Commons undertook two major studies of the history of labor unions in the United States. Beginning in 1910, he edited A Documentary History of American Industrial Society, a large work that preserved many original-source documents of the American labor movement. Almost as soon as that work was complete, Commons began editing History of Labor in the United States, a narrative work which built on the previous 10-volume documentary history. 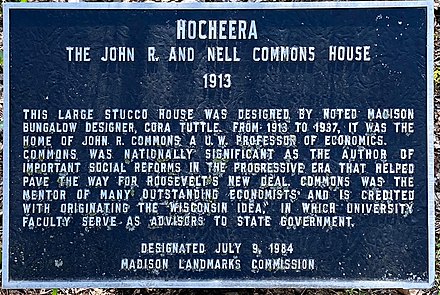 Today, Commons's contribution to labor history is considered equal to his contributions to the theory of institutional economics. He also made valuable contributions to the history of economic thought, especially with regard to collective action. He is honored at the University of Wisconsin in Madison with rooms and clubs named for him.[21]

Commons was the mentor of many outstanding economists and has been credited with originating the "Wisconsin Idea," in which university faculty serve as advisors to state government.[22]

His former home, The John R. and Nell Commons House, is listed on the National Register of Historic Places.[23][24]

Retrieved from "http://en.turkcewiki.org/w/index.php?title=John_R._Commons&oldid=1019363818"
This website is a mirror of Wikipedia, and is not affiliated with the Wikimedia Foundation.
Categories:
Hidden categories: