Jump to navigation Jump to search
U.S. county in Colorado

Jefferson County, is one of the 64 counties in the U.S. state of Colorado. As of the 2010 census, the population was 534,543,[1] making it the fourth-most populous county in Colorado. The county seat is Golden,[2] and the most populous city is Lakewood.

In 2010, the center of population of Colorado was located in Jefferson County.[3]

A major employer in Jefferson County is the large Coors Brewing Company in Golden. Also, the state-supported Colorado School of Mines is located in Jefferson County, offering programs in STEM topics such as mining, geology, chemistry, and engineering.

On August 25, 1855, the Kansas Territorial Legislature created Arapahoe County to govern the entire western portion of the territory. The county was named for the Arapaho Nation of Native Americans that lived in the region.

In June 22, 1850, gold was discovered along the South Platte River in Arapahoe County (in present-day Englewood). This discovery precipitated the Pike's Peak Gold Rush. Many residents of the mining region felt disconnected from the remote territorial governments of Kansas and Nebraska, so they voted to form their own Territory of Jefferson on October 24, 1859. The following month, the Jefferson Territorial Legislature organized 12 counties for the new territory, including Jefferson County. Jefferson County was named for the namesake of the Jefferson Territory, Thomas Jefferson, the principal author of the Declaration of Independence and the nation's third president.[4] Golden City served as the county seat of Jefferson County. Robert Williamson Steele, Governor of the Provisional Government of the Territory of Jefferson from 1859 to 1861, built his home in the county at Mount Vernon and later at Apex.

The Jefferson Territory never received federal sanction, but during his last week in office, President James Buchanan signed an act which organized the Territory of Colorado on February 28, 1861.[5] That November 1, the new Colorado General Assembly organized the 17 original counties of Colorado, including a new Jefferson County. In 1908, the southern tip of Jefferson County was transferred to Park County, reducing Jefferson County to its present length of 54 miles (87 km). Several annexations by the City & County of Denver and the 2001 consolidation of the City & County of Broomfield removed the east and extreme northwestern portion of the county, respectively. 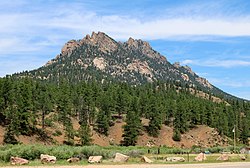 Long Scraggy Peak in the southeastern part of the county.

Jefferson County is one of the few counties in the United States to border as many as ten counties.

According to a report in the Journal of the American Medical Association, residents of Jefferson County had a 2014 life expectancy of 80.02 years.[13]

Retrieved from "http://en.turkcewiki.org/w/index.php?title=Jefferson_County,_Colorado&oldid=949377255"
This website is a mirror of Wikipedia, and is not affiliated with the Wikimedia Foundation.
Categories:
Hidden categories: