Jump to navigation Jump to search
Archaeological site in Morocco

Jebel Irhoud (Moroccan Arabic: جبل إيغود‎, romanized: ǧabal īġūd pronounced [ʒbəl ˈiɣud] also Adrar Ighud, Berber: Adrar n Iɣud) is an archaeological site located just north of the locality known as Tlet Ighoud, about 50 km (30 mi) south-east of the city of Safi in Morocco. It is noted for the hominin fossils that have been found there since the site's discovery in 1960. Originally thought to be Neanderthals, the specimens have since been assigned to Homo sapiens and have been dated to roughly 300,000 years ago (286±32 ka for the Irhoud 3 mandible, 315±34 ka based on other fossils and the flint artefacts found nearby).[2][3]

The site is the remnants of a solutional cave filled with 8 meters (26 ft) of deposits from the Pleistocene era, located on the eastern side of a karstic outcrop of limestone[4] at an elevation of 562 meters (1,844 ft).[5] It was discovered in 1960 when the area was being mined for the mineral baryte.[4] A miner discovered a skull in the wall of the cave, extracted it and gave it to an engineer, who kept it as a souvenir for a time. It was eventually handed over to the University of Rabat, who organized a joint French-Moroccan expedition to the site in 1961, headed by the French researcher Émile Ennouchi.[6]

Ennouchi's team identified the remains of around 30 species of mammals, some of which are associated with the Middle Pleistocene, but the stratigraphic provenance is unknown. Another excavation was carried out by Jacques Tixier and Roger de Bayle des Hermens in 1967 and 1969 in which 22 layers were identified in the cave. The lower 13 layers were found to contain signs of human habitation including an industry classified as Levallois Mousterian.[4]

The site is particularly noted for the hominin fossils found there. Ennouchi discovered a skull which he termed Irhoud 1 and is now on display in the Rabat Archaeological Museum. He discovered part of another skull, designated Irhoud 2, the following year and subsequently uncovered the lower mandible of a child, designated Irhoud 3. Tixier's excavation found 1,267 recorded objects including skulls, a humerus designated Irhoud 4 and a hip bone recorded as Irhoud 5. Further excavations were carried out by American researchers in the 1990s and by a team led by Jean-Jacques Hublin from 2004.[5][7] Animal remains found at the site have enabled the ancient ecology of the area to be reconstructed. It was quite different to the present and probably represented a dry, open and perhaps steppe-like environment roamed by equids, bovids, gazelles, rhinoceros and various predators.[8] 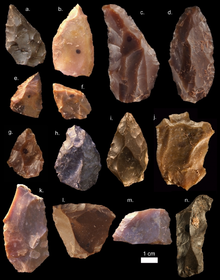 The finds were initially interpreted as Neanderthal, as the stone tools found with them were believed to be associated exclusively with Neanderthals.[9][10] They also had archaic features believed to be representative of the Neanderthals, rather than Homo sapiens. They were thought to be around 40,000 years old, but this was thrown into doubt by faunal evidence suggesting a Middle Pleistocene date, around 160,000 years ago. The fossils were reappraised as representing an archaic form of Homo sapiens or perhaps a population of Homo sapiens that had interbred with Neanderthals.[11] This was consistent with the idea that the then oldest known remains of a Homo sapiens, dated to around 195,000 years ago and found in Omo Kibish, Ethiopia, indicated an eastern African origin for humans at around 200,000 years ago.[12]

However, dating carried out by the Max Planck Institute for Evolutionary Anthropology in Leipzig revealed that the Jebel Irhoud site was far older than first thought.[1] Fresh excavations carried out in 2004 by the Hublin team revealed more than 20 new bones from the remains of at least five people, and a number of stone tools. The finds included part of a skull, a jawbone, teeth and limb bones which had come from three adults, a juvenile, and a child aged about seven and a half years old.[11] The bones looked similar facially to those of humans today but had much larger lower jaws and elongated braincases. They have similar features to the Florisbad Skull dating to 260,000 years ago found at the other end of the continent, in Florisbad, South Africa, which has been attributed to Homo sapiens on the basis of the Jebel Irhoud finds.[13][11] 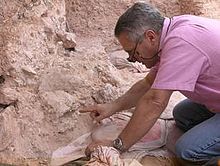 Jean-Jacques Hublin at Jebel Irhoud (Morocco), pointing to the crushed human skull (Irhoud 10) whose orbits are visible just beyond his finger tip.

The tools were found alongside gazelle bones and lumps of charcoal, indicating the presence of fire and probably of cooking in the cave. The gazelle bones showed characteristic signs of butchery and cooking, such as cut marks, notches consistent with marrow extraction, and charring.[12] Some of the tools had been burned due to fires being lit on top of them, presumably after they had been discarded. This enabled the researchers to use thermoluminescence dating to ascertain when the burning had happened, and by proxy the age of the fossil bones, which were found in the same deposit layer. The burnt tools were dated to around 315,000 years ago, indicating that the fossils are of about the same age. This conclusion was confirmed by recalculating the age of the Irhoud 3 mandible, which produced an age range compatible with that of the tools at roughly 280,000 to 350,000 years old. If they hold up, these dates would make the remains by far the earliest known examples of Homo sapiens.[7][14][15]

This suggests that, rather than arising in East Africa around 200,000 years ago, modern humans may already have been present across the length of Africa 100,000 years earlier. According to study author Jean-Jacques Hublin, "The idea is that early Homo sapiens dispersed around the continent and elements of human modernity appeared in different places, and so different parts of Africa contributed to the emergence of what we call modern humans today."[13] Early humans may have comprised a large, interbreeding population dispersed across Africa whose spread was facilitated by a wetter climate that created a "green Sahara", around 330,000 to 300,000 years ago. The rise of modern humans may thus have taken place on a continental scale rather than being confined to a particular corner of Africa.[16] 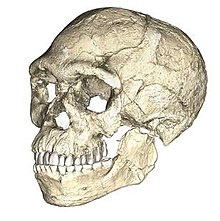 A composite reconstruction of the earliest known Homo sapiens fossils from Jebel Irhoud, based on micro computed tomographic scans of multiple original fossils.

When comparing the fossils with those of modern humans, the main difference is the elongated shape of the fossil braincase. According to the researchers, this indicates that brain shape, and possibly brain functions, evolved within the Homo sapiens lineage and relatively recently.[7][13][11] Evolutionary changes in brain shape are likely to be associated with genetic changes of the brain's organization, interconnection and development[17] and may reflect adaptive changes in the way the brain functions.[14] Such changes may have caused the human brain to become rounder and two regions in the back of the brain to become enlarged over thousands of years of evolution.[14] The Jebel Irhoud individuals also had very thick brow ridges and lacked prognathism.[18] The degree of tooth development is similar to modern European children of the same age, but teeth roots develop faster than for modern humans (and slower than for apes and for some other fossil hominids). Tooth crowns took a longer time to form than in modern humans.[19]

Retrieved from "http://en.turkcewiki.org/w/index.php?title=Jebel_Irhoud&oldid=961550922"
This website is a mirror of Wikipedia, and is not affiliated with the Wikimedia Foundation.
Categories:
Hidden categories: