Jasovská Cave (Slovak: Jasovská jaskyňa, and Hungarian: Jászói barlang) is a speleothem limestone cave and archaeological site in the Slovak Karst in Slovakia. It is located near the village of Jasov, around 25 km (16 mi) from Košice city. 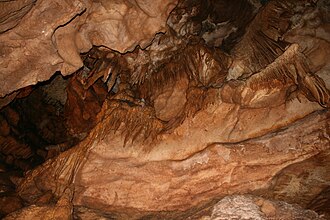 Many archaeological discoveries of the Paleolithic, Neolith and the Hallstatt periods have been made in the cave. Along with a number of caves of the Slovak Karst, Jasovská Cave has been induced into the UNESCO World Heritage list as a part of the Caves of Aggtelek Karst and Slovak Karst site.[1]

Retrieved from "http://en.turkcewiki.org/w/index.php?title=Jasovská_Cave&oldid=933484168"
This website is a mirror of Wikipedia, and is not affiliated with the Wikimedia Foundation.
Categories:
Hidden categories: