The annual interest rate is the rate over a period of one year. Other interest rates apply over different periods, such as a month or a day, but they are usually annualised.

Interest rates vary according to:

as well as other factors.

A company borrows capital from a bank to buy assets for its business. In return, the bank charges the company interest. (The lender might also require rights over the new assets as collateral.)

A bank will use the capital deposited by individuals to make loans to their clients. In return, the bank should pay individuals who have deposited their capital interest. The amount of interest payment depends on the interest rate and the amount of capital they deposited.

Base rate usually refers to the annualized rate offered on overnight deposits by the central bank or other monetary authority.[citation needed]

A discount rate is applied to calculate present value.

For an interest-bearing security, coupon rate is the ratio of the annual coupon amount (the coupon paid per year) per unit of par value, whereas current yield is the ratio of the annual coupon divided by its current market price. Yield to maturity is a bond's expected internal rate of return, assuming it will be held to maturity, that is, the discount rate which equates all remaining cash flows to the investor (all remaining coupons and repayment of the par value at maturity) with the current market price.

Interest rate targets are a vital tool of monetary policy and are taken into account when dealing with variables like investment, inflation, and unemployment. The central banks of countries generally tend to reduce interest rates when they wish to increase investment and consumption in the country's economy. However, a low interest rate as a macro-economic policy can be risky and may lead to the creation of an economic bubble, in which large amounts of investments are poured into the real-estate market and stock market. In developed economies, interest-rate adjustments are thus made to keep inflation within a target range for the health of economic activities or cap the interest rate concurrently with economic growth to safeguard economic momentum.[3][4][5][6][7] 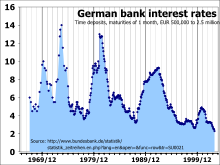 The interest rates on prime credits in the late 1970s and early 1980s were far higher than had been recorded – higher than previous US peaks since 1800, than British peaks since 1700, or than Dutch peaks since 1600; "since modern capital markets came into existence, there have never been such high long-term rates" as in this period.[13]

Possibly before modern capital markets, there have been some accounts that savings deposits could achieve an annual return of at least 25% and up to as high as 50%. (William Ellis and Richard Dawes, "Lessons on the Phenomenon of Industrial Life... ", 1857, p III–IV)

The nominal interest rate is the rate of interest with no adjustment for inflation.

For example, suppose someone deposits $100 with a bank for 1 year, and they receive interest of $10 (before tax), so at the end of the year, their balance is $110 (before tax). In this case, regardless of the rate of inflation, the nominal interest rate is 10% per annum (before tax).

The real interest rate measures the growth in real value of the loan plus interest, taking inflation into account. The repayment of principal plus interest is measured in real terms compared against the buying power of the amount at the time it was borrowed, lent, deposited or invested.

If inflation is 10%, then the $110 in the account at the end of the year has the same purchasing power (that is, buys the same amount) as the $100 had a year ago. The real interest rate is zero in this case.

The real interest rate is given by the Fisher equation:

where p is the inflation rate. For low rates and short periods, the linear approximation applies:

There is a market for investments, including the money market, bond market, stock market, and currency market as well as retail banking.

The level of risk in investments is taken into consideration. Riskier investments such as shares and junk bonds are normally expected to deliver higher returns than safer ones like government bonds.

The additional return above the risk-free nominal interest rate which is expected from a risky investment is the risk premium. The risk premium an investor requires on an investment depends on the risk preferences of the investor. Evidence suggests that most lenders are risk-averse.[16]

A maturity risk premium applied to a longer-term investment reflects a higher perceived risk of default.

There are four kinds of risk:

Most investors prefer their money to be in cash rather than in less fungible investments. Cash is on hand to be spent immediately if the need arises, but some investments require time or effort to transfer into spendable form. The preference for cash is known as liquidity preference. A 1-year loan, for instance, is very liquid compared to a 10-year loan. A 10-year US Treasury bond, however, is still relatively liquid because it can easily be sold on the market.

A basic interest rate pricing model for an asset is

in is the nominal interest rate on a given investment
ir is the risk-free return to capital
i*n is the nominal interest rate on a short-term risk-free liquid bond (such as U.S. Treasury bills).
rp is a risk premium reflecting the length of the investment and the likelihood the borrower will default
lp is a liquidity premium (reflecting the perceived difficulty of converting the asset into money and thus into goods).
pe is the expected inflation rate.

Assuming perfect information, pe is the same for all participants in the market, and the interest rate model simplifies to 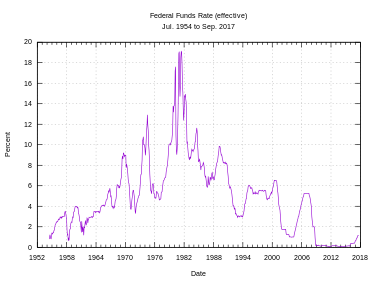 The Federal Reserve (often referred to as 'the Fed') implements monetary policy largely by targeting the federal funds rate. This is the rate that banks charge each other for overnight loans of federal funds, which are the reserves held by banks at the Fed. Open market operations are one tool within monetary policy implemented by the Federal Reserve to steer short-term interest rates using the power to buy and sell treasury securities.

Loans, bonds, and shares have some of the characteristics of money and are included in the broad money supply.

By setting i*n, the government institution can affect the markets to alter the total of loans, bonds and shares issued. Generally speaking, a higher real interest rate reduces the broad money supply.

Through the quantity theory of money, increases in the money supply lead to inflation.

Impact on savings and pensions[edit]

Financial economists such as World Pensions Council (WPC) researchers have argued that durably low interest rates in most G20 countries will have an adverse impact on the funding positions of pension funds as “without returns that outstrip inflation, pension investors face the real value of their savings declining rather than ratcheting up over the next few years” [19]

From 1982 until 2012, most Western economies experienced a period of low inflation combined with relatively high returns on investments across all asset classes including government bonds. This brought a certain sense of complacency[citation needed] amongst some pension actuarial consultants and regulators, making it seem reasonable to use optimistic economic assumptions to calculate the present value of future pension liabilities.

Because interest and inflation are generally given as percentage increases, the formulae above are (linear) approximations.

is only approximate. In reality, the relationship is

A so-called "zero interest-rate policy" (ZIRP) is a very low—near-zero—central bank target interest rate. At this zero lower bound the central bank faces difficulties with conventional monetary policy, because it is generally believed that market interest rates cannot realistically be pushed down into negative territory.

Given the alternative of holding cash, and thus earning 0%, rather than lending it out, profit-seeking lenders will not lend below 0%, as that will guarantee a loss, and a bank offering a negative deposit rate will find few takers, as savers will instead hold cash.[23]

Negative interest rates have been proposed in the past, notably in the late 19th century by Silvio Gesell.[24] A negative interest rate can be described (as by Gesell) as a "tax on holding money"; he proposed it as the Freigeld (free money) component of his Freiwirtschaft (free economy) system. To prevent people from holding cash (and thus earning 0%), Gesell suggested issuing money for a limited duration, after which it must be exchanged for new bills; attempts to hold money thus result in it expiring and becoming worthless. Along similar lines, John Maynard Keynes approvingly cited the idea of a carrying tax on money,[24] (1936, The General Theory of Employment, Interest and Money) but dismissed it due to administrative difficulties.[25] More recently, a carry tax on currency was proposed by a Federal Reserve employee (Marvin Goodfriend) in 1999, to be implemented via magnetic strips on bills, deducting the carry tax upon deposit, the tax being based on how long the bill had been held.[25]

It has been proposed that a negative interest rate can in principle be levied on existing paper currency via a serial number lottery, such as randomly choosing a number 0 through 9 and declaring that notes whose serial number end in that digit are worthless, yielding an average 10% loss of paper cash holdings to hoarders; a drawn two-digit number could match the last two digits on the note for a 1% loss. This was proposed by an anonymous student of Greg Mankiw,[24] though more as a thought experiment than a genuine proposal.[26]

A much simpler method to achieve negative real interest rates and provide a disincentive to holding cash, is for governments to encourage mildly inflationary monetary policy; indeed, this is what Keynes recommended back in 1936.

Both the European Central Bank starting in 2014 and the Bank of Japan starting in early 2016 pursued the policy on top of their earlier and continuing quantitative easing policies. The latter's policy was said at its inception to be trying to 'change Japan’s “deflationary mindset.”' In 2016 Sweden, Denmark and Switzerland—not directly participants in the Euro currency zone—also had NIRPs in place.[27]

In July 2009, Sweden's central bank, the Riksbank, set its policy repo rate, the interest rate on its one-week deposit facility, at 0.25%, at the same time as setting its overnight deposit rate at −0.25%.[32] The existence of the negative overnight deposit rate was a technical consequence of the fact that overnight deposit rates are generally set at 0.5% below or 0.75% below the policy rate.[32][33] The Riksbank studied the impact of these changes and stated in a commentary report[34] that they led to no disruptions in Swedish financial markets.

The US Federal Reserve called an end to quantitative easing in September 2017 and subsequently raised its benchmark short-term interest rate by a quarter percentage point.[35][clarification needed]

During the European debt crisis, government bonds of some countries (Switzerland, Denmark, Germany, Finland, the Netherlands and Austria) have been sold at negative yields. Suggested explanations include desire for safety and protection against the eurozone breaking up (in which case some eurozone countries might redenominate their debt into a stronger currency).[36]

For practical purposes, investors and academics typically view the yields on government or quasi-government bonds guaranteed by a small number of the most creditworthy governments (UK, USA, Switzerland, EU, Japan) to effectively have negligible default risk. As financial theory would predict, investors and academics typically do not view non-government guaranteed corporate bonds in the same way. Most credit analysts value them at a spread to similar government bonds with similar duration, geographic exposure, and currency exposure. Through 2018 there have only been a few of these corporate bonds that have traded at negative nominal interest rates. The most notable example of this was Nestle, some of whose AAA-rated bonds traded at negative nominal interest rate in 2015. However, some academics and investors believe this may have been influenced by volatility in the currency market during this period.

Retrieved from "http://en.turkcewiki.org/w/index.php?title=Interest_rate&oldid=928503949"
This website is a mirror of Wikipedia, and is not affiliated with the Wikimedia Foundation.
Categories:
Hidden categories: