(Redirected from Insulae)
Jump to navigation Jump to search

The Latin word insula (literally meaning "island", plural insulae) was used in Roman cities to mean either a city block in a city plan, i.e. a building area surrounded by four streets,[1] or, later, a type of apartment building that occupied such a city block.[2][3]

A standard Roman city plan[4] was based on a grid of orthogonal (laid out on right angles) streets.[5] It was founded on the ancient Greek model of Hippodamus. It was used especially when new cities were established, e.g. in Roman coloniae.

The streets of each city were designated the Decumani (east–west-oriented) and Cardines (north–south). The principal streets, the Decumanus Maximus and Cardo Maximus, intersected at or close to the forum, around which the most important public buildings were sited. 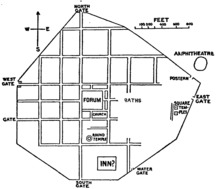 Retrieved from "http://en.turkcewiki.org/w/index.php?title=Insula_(Roman_city)&oldid=969479804"
This website is a mirror of Wikipedia, and is not affiliated with the Wikimedia Foundation.
Categories: