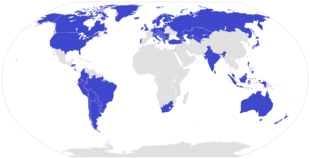 ISO 45001 is an ISO standard for management systems of occupational health and safety (OH&S), published in March 2018. The goal of ISO 45001 is the reduction of occupational injuries and diseases, including promoting and protecting physical and mental health.[1]

The standard is based on OHSAS 18001, conventions and guidelines of the International Labour Organization including ILO OSH 2001, and national standards.[1][2] It includes elements that are additional to BS OHSAS 18001 which it is replacing over a three-year migration period from 2018 to 2021.[3]

ISO 45001 was proposed at the ISO in October 2013. The committee ISO/PC 283, created in 2013, had direct responsibility for the standardization process.[6] At least 70 countries contributed to the drafting process.[7] Preparation and committee work lasted until December 2015. From 2015 to 2017, a first draft failed to gain sufficient approval from ISO members and was revised in a second draft, which was approved and refined into a final draft.[6] In the final vote, the standard garnered 62 votes in favour, nine abstentions and four votes against from France, India, Spain, and Turkey.[8] The standard was published on 12 March 2018.[6]

ISO 45001 is set to replace OHSAS 18001 over three years following its publication in March 2018.[9] BSI will formally withdraw BS OSHAS 18001 in September 2021, at the end of the extended migration period (due to COVID-19).[10][11] ISO 45001 uses the management system standard structure guideline Annex SL to allow for simplified integration with other management system standards, such as ISO 9001 and ISO 14001.[12] The International Accreditation Forum has published requirements for migration from OHSAS 18001 to ISO 45001.[13]

ISO/IEC TS 17021-10:2018 is a technical specification setting out competence requirements for auditing and certification of ISO 45001.[14]

Retrieved from "http://en.turkcewiki.org/w/index.php?title=ISO_45001&oldid=1017176597"
This website is a mirror of Wikipedia, and is not affiliated with the Wikimedia Foundation.
Categories:
Hidden categories: