ISO 3166-2:NO is the entry for Norway in ISO 3166-2, part of the ISO 3166 standard published by the International Organization for Standardization (ISO), which defines codes for the names of the principal subdivisions (e.g., provinces or states) of all countries coded in ISO 3166-1.

Currently for Norway, ISO 3166-2 codes are defined for the following subdivisions:

Each code consists of two parts, separated by a hyphen. The first part is NO, the ISO 3166-1 alpha-2 code of Norway. The second part is two digits:

The digits are the official number of the county used in Norway, which is assigned following the coastline from the Swedish border in the southeast to the Russian border in the northeast (13 was used by Bergen, which was merged into Hordaland in 1972; 16 & 17 merged in 2018 and became Trøndelag which was eventually numbered 50).

Collectively Svalbard and Jan Mayen is also assigned its own set of country codes in ISO 3166-1, with alpha-2 code SJ.

Click on the button in the header to sort each column. Note that subdivision names will be sorted in Norwegian alphabetical order: a-z, æ, ø, å. 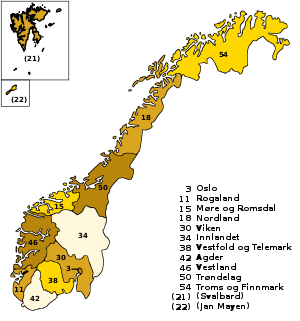 Former map of Norway (Jan Mayen not shown) with each county and Svalbard labelled with the second part of its ISO 3166-2 code (with leading digit 0 omitted). 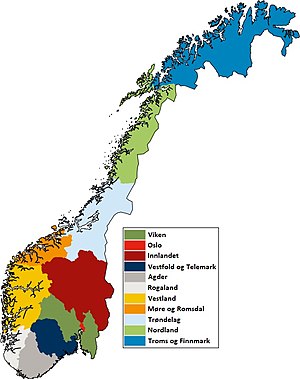 Note that the county structure in Norway changed on 1 January 2020, which will mean the following changes:[1]

The following changes to the entry have been announced by the ISO 3166/MA since the first publication of ISO 3166-2 in 1998. ISO stopped issuing newsletters in 2013.

Retrieved from "http://en.turkcewiki.org/w/index.php?title=ISO_3166-2:NO&oldid=953761930"
This website is a mirror of Wikipedia, and is not affiliated with the Wikimedia Foundation.
Categories: