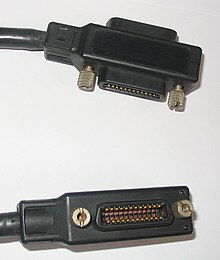 Although the bus was created in the late 1960s to connect together automated test equipment, it also had some success during the 1970s and 1980s as a peripheral bus for early microcomputers, notably the Commodore PET. Newer standards have largely replaced IEEE 488 for computer use, but it is still used by some test equipment.

In the late 1960s, Hewlett-Packard (HP)[1] manufactured various automated test and measurement instruments, such as digital multimeters and logic analyzers. They developed the HP Interface Bus (HP-IB) to enable easier interconnection between instruments and controllers (computers and other instruments).

The bus was relatively easy to implement using the technology at the time, using a simple parallel bus and several individual control lines. For example, the HP 59501 Power Supply Programmer and HP 59306A Relay Actuator were both relatively simple HP-IB peripherals implemented in TTL, without the need for a microprocessor.

HP licensed the HP-IB patents for a nominal fee to other manufacturers. It became known as the General Purpose Interface Bus (GPIB), and became a de facto standard for automated and industrial instrument control. As GPIB became popular, it was formalized by various standards organizations.

In 1975, the IEEE standardized the bus as Standard Digital Interface for Programmable Instrumentation, IEEE 488; it was revised in 1978 (producing IEEE 488-1978).[2] The standard was revised in 1987, and redesignated as IEEE 488.1 (IEEE 488.1-1987). These standards formalized the mechanical, electrical, and basic protocol parameters of GPIB, but said nothing about the format of commands or data.

While IEEE 488.1 defined the hardware and IEEE 488.2 defined the protocol, there was still no standard for instrument-specific commands. Commands to control the same class of instrument, e.g., multimeters, varied between manufacturers and even models.

The United States Air Force,[4] and later Hewlett-Packard, recognized this as a problem. In 1989, HP developed their TML language[5] which was the forerunner to Standard Commands for Programmable Instrumentation (SCPI), introduced as an industry standard in 1990.[6] SCPI added standard generic commands, and a series of instrument classes with corresponding class-specific commands. SCPI mandated the IEEE 488.2 syntax, but allowed other (non-IEEE 488.1) physical transports.

National Instruments introduced a backward-compatible extension to IEEE 488.1, originally known as HS-488. It increased the maximum data rate to 8 Mbyte/s, although the rate decreases as more devices are connected to the bus. This was incorporated into the standard in 2003 (IEEE 488.1-2003),[7] over HP's objections.[8][9]

The bus supports 31 five-bit primary device addresses numbered from 0 to 30, allocating a unique address to each device on the bus.[13][14]

The standard allows up to 15 devices to share a single physical bus of up to 20 metres (66 ft) total cable length. The physical topology can be linear or star (forked).[15] Active extenders allow longer buses, with up to 31 devices theoretically possible on a logical bus.

Control and data transfer functions are logically separated; a controller can address one device as a "talker" and one or more devices as "listeners" without having to participate in the data transfer. It is possible for multiple controllers to share the same bus, but only one can be the "Controller In Charge" at a time.[16]

In the original protocol, transfers use an interlocked, three-wire ready–valid–accepted handshake.[17] The maximum data rate is about one megabyte per second. The later HS-488 extension relaxes the handshake requirements, allowing up to 8 Mbyte/s. The slowest participating device determines the speed of the bus.[18]

One unusual feature of IEEE 488 connectors is they commonly use a "double-headed" design, with male on one side, and female on the other. This allows stacking connectors for easy daisy-chaining. Mechanical considerations limit the number of stacked connectors to four or fewer, although a workaround involving physically supporting the connectors may be able to get around this.

They are held in place by screws, either UTS (now largely obsolete) or metric M3.5×0.6 threads. Early versions of the standard suggested that metric screws should be blackened to avoid confusion with the incompatible UTS threads. However, by the 1987 revision this was no longer considered necessary because of the prevalence of metric threads.[19]

The IEC 60625 standard prescribes the use of 25-pin D-subminiature connectors (the same as used for the parallel port on IBM PC compatibles). This connector did not gain significant market acceptance against the established 24-pin connector.

IEEE-488 port with listed capabilities on a spectrum analyzer.

Use as a computer interface[edit]

HP's designers did not specifically plan for IEEE 488 to be a peripheral interface for general-purpose computers; the focus was on instrumentation. But when HP's early microcomputers needed an interface for peripherals (disk drives, tape drives, printers, plotters, etc.), HP-IB was readily available and easily adapted to the purpose.

HP computer products which used HP-IB included the HP series 80, HP 9800 series,[21] the HP 2100 series,[22] and the HP 3000 series.[23] HP computer peripherals which did not utilize the RS-232 communication interface often used HP-IB including disc systems like the HP 7935. Some of HP's advanced pocket calculators of the 1980s, such as the HP-41 and HP-71B series, also had IEEE 488 capabilities, via an optional HP-IL/HP-IB interface module.

Other manufacturers adopted GPIB for their computers as well, such as with the Tektronix 405x line.

The Commodore PET (introduced 1977) range of personal computers connected their peripherals using the IEEE 488 bus, but with a non-standard card edge connector. Commodore's following 8-bit machines utilized a serial bus whose protocol was based on IEEE 488.[24] Commodore marketed an IEEE 488 cartridge for the VIC-20[25] and the Commodore 64.[26] Several third party suppliers of Commodore 64 peripherals made a cartridge for the C64 that provided an IEEE 488-derived interface on a card edge connector similar to that of the PET series.[27]

Comparison with other interface standards[edit]

Electrically, IEEE 488 used a hardware interface that could be implemented with some discrete logic or with a microcontroller. The hardware interface enabled devices made by different manufacturers to communicate with a single host. Since each device generated the asynchronous handshaking signals required by the bus protocol, slow and fast devices could be mixed on one bus. The data transfer is relatively slow, so transmission line issues such as impedance matching and line termination are ignored. There was no requirement for galvanic isolation between the bus and devices, which created the possibility of ground loops causing extra noise and loss of data.

Physically, the IEEE 488 connectors and cabling were rugged and held in place by screws. While physically large and sturdy connectors were an advantage in industrial or laboratory set ups, the size and cost of the connectors was a liability in applications such as personal computers.

Although the electrical and physical interfaces were well defined, there was not an initial standard command set. Devices from different manufacturers might use different commands for the same function.[28] Some aspects of the command protocol standards were not standardized until Standard Commands for Programmable Instruments (SCPI) in 1990. Implementation options (e.g. end of transmission handling) can complicate interoperability in pre-IEEE 488.2 devices.

More recent standards such as USB, FireWire, and Ethernet take advantage of declining costs of interface electronics to implement more complex standards providing higher bandwidth. The multi-conductor (parallel data) connectors and shielded cable were inherently more costly than the connectors and cabling that could be used with serial data transfer standards such as RS-232, RS-485, USB, FireWire or Ethernet. Very few mass-market personal computers or peripherals (such as printers or scanners) implemented IEEE 488.

Retrieved from "http://en.turkcewiki.org/w/index.php?title=IEEE-488&oldid=963740137"
This website is a mirror of Wikipedia, and is not affiliated with the Wikimedia Foundation.
Categories:
Hidden categories: