The international standard IEC 61499, addressing the topic of function blocks for industrial process measurement and control systems, was initially published in 2005. The specification of IEC 61499 defines a generic model for distributed control systems and is based on the IEC 61131 standard. The concepts of IEC 61499 are also explained by Lewis and Zoitl [1] as well as Vyatkin.[2] 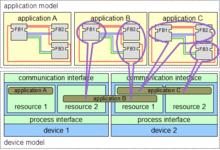 Application and device model of IEC 61499

IEC 61499-3 was related to an early Publicly Available Specification (PAS) version of the standard and was withdrawn in 2008. This part answered FAQs related to the IEC 61499 standard and described the use of IEC 61499 elements with examples to solve common challenges during the engineering of automation systems.

Besides these general rules, IEC 61499-4 also defines the structure of compliance profiles. A compliance profile describes how a system conforms to the rules of the IEC 61499 standard. For example, the configurability of a device by a software tool is determined by the supported management commands. The XML exchange format which determines portability of IEC 61499 compliant applications is defined within part 2 and is completed by the compliance profile, for example by declaring the supported file name extensions for exchange of software library elements.

The interoperability between devices of different vendors is defined by the layers of the OSI models. Also status outputs, IP addresses, port numbers as well as the data encoding of function blocks like PUBLISH/SUBSCRIBE and CLIENT/SERVER, which are used for the communication between devices, have to be considered. HOLOBLOC, Inc. defines the "IEC 61499 compliance profile for feasibility demonstrations",[5] which is for example supported by the IEC 61499 compliant software tools FBDK [6], 4diac IDE [7], and nxtSTUDIO[8].

Retrieved from "http://en.turkcewiki.org/w/index.php?title=IEC_61499&oldid=921036396"
This website is a mirror of Wikipedia, and is not affiliated with the Wikimedia Foundation.
Categories: