, is a property of vascular plants, soils and rocks, that describes the ease with which a fluid (usually water) can move through pore spaces or fractures. It depends on the intrinsic permeability of the material, the degree of saturation, and on the density and viscosity of the fluid. Saturated hydraulic conductivity, Ksat, describes water movement through saturated media. By definition, hydraulic conductivity is the ratio of velocity to hydraulic gradient indicating permeability of porous media.

There are two broad categories of determining hydraulic conductivity:

The experimental approach is broadly classified into:

The small scale field tests are further subdivided into:

The methods of determination of hydraulic conductivity and other related issues are investigated by several researchers.[citation needed]

Hazen's empirical coefficient, which takes a value between 0.0 and 1.5 (depending on literatures), with an average value of 1.0. A.F. Salarashayeri & M. Siosemarde give C as usually taken between 1.0 and 1.5, with D in mm and K in cm/s.

A pedotransfer function (PTF) is a specialized empirical estimation method, used primarily in the soil sciences, however has increasing use in hydrogeology.[1] There are many different PTF methods, however, they all attempt to determine soil properties, such as hydraulic conductivity, given several measured soil properties, such as soil particle size, and bulk density.

There are relatively simple and inexpensive laboratory tests that may be run to determine the hydraulic conductivity of a soil: constant-head method and falling-head method.

The constant-head method is typically used on granular soil. This procedure allows water to move through the soil under a steady state head condition while the volume of water flowing through the soil specimen is measured over a period of time. By knowing the volume

of water measured in a time

, over a specimen of length

, as well as the head

, can be derived by simply rearranging Darcy's law:

Proof: Darcy's law states that the volumetric flow depends on the pressure differential,

, between the two sides of the sample, the permeability,

In a constant head experiment, the head (difference between two heights) defines an excess water mass,

is the density of water. This mass weighs down on the side it is on, creating a pressure differential of

is the gravitational acceleration. Plugging this directly into the above gives us

then we have our result. QED

In the falling-head method, the soil sample is first saturated under a specific head condition. The water is then allowed to flow through the soil without adding any water, so the pressure head declines as water passes through the specimen. The advantage to the falling-head method is that it can be used for both fine-grained and coarse-grained soils. .[3] If the head drops from

, then the hydraulic conductivity is equal to

Proof: As above, Darcy's law reads

The decrease in volume is related to the falling head by

. Plugging this relationship into the above, and taking the limit as

, we find the differential equation

which has the solution

and rearranging, we have our result.QED

Pumping test is the most reliable method to calculate the coefficient of permeability of a soil. This test is further classified into Pumping in test and pumping out test.

There are also in-situ methods for measuring the hydraulic conductivity in the field.
When the water table is shallow, the augerhole method, a slug test, can be used for determining the hydraulic conductivity below the water table.
The method was developed by Hooghoudt (1934)[4] in The Netherlands and introduced in the US by Van Bavel en Kirkham (1948).[5]
The method uses the following steps: 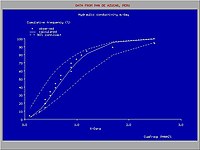 depth of the waterlevel in the hole relative to the water table in the soil (cm),

time (in seconds) since the first measurement of

is a factor depending on the geometry of the hole:

radius of the cylindrical hole (cm),

is the average depth of the water level in the hole relative to the water table in the soil (cm), found as

is the depth of the bottom of the hole relative to the water table in the soil (cm).

The picture shows a large variation of

-values measured with the augerhole method in an area of 100 ha.[7] The ratio between the highest and lowest values is 25. The cumulative frequency distribution is lognormal and was made with the CumFreq program.

The transmissivity is a measure of how much water can be transmitted horizontally, such as to a pumping well.

Transmissivity should not be confused with the similar word transmittance used in optics, meaning the fraction of incident light that passes through a sample.

An aquifer may consist of

soil layer with a saturated thickness

in m, the transmissivity

is found in units m2/day.
The total transmissivity

signifies the summation over all layers

of the aquifer is:

, the total thickness of the aquifer, is

The transmissivity of an aquifer can be determined from pumping tests.[8]

The resistance to vertical flow (

soil layer with a saturated thickness

in m, the resistance (

) is expressed in days.
The total resistance (

signifies the summation over all layers:

) of the aquifer is:

is the total thickness of the aquifer:

When the horizontal and vertical hydraulic conductivity (

) differ considerably, the aquifer is said to be anisotropic with respect to hydraulic conductivity.
An aquifer is called semi-confined when a saturated layer with a relatively small horizontal hydraulic conductivity (the semi-confining layer or aquitard) overlies a layer with a relatively high horizontal hydraulic conductivity so that the flow of groundwater in the first layer is mainly vertical and in the second layer mainly horizontal.
The resistance of a semi-confining top layer of an aquifer can be determined from pumping tests.[8]
When calculating flow to drains[9] or to a well field[10] in an aquifer with the aim to control the water table, the anisotropy is to be taken into account, otherwise the result may be erroneous.

Hydraulic conductivity (K) is one of the most complex and important of the properties of aquifers in hydrogeology as the values found in nature:

Ranges of values for natural materials[edit] 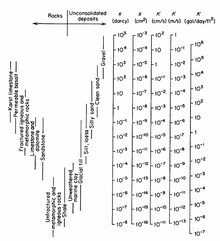 Values are for typical fresh groundwater conditions — using standard values of viscosity and specific gravity for water at 20 °C and 1 atm. See the similar table derived from the same source for intrinsic permeability values.[11]

Retrieved from "http://en.turkcewiki.org/w/index.php?title=Hydraulic_conductivity&oldid=953201894"
This website is a mirror of Wikipedia, and is not affiliated with the Wikimedia Foundation.
Categories:
Hidden categories: