The Hotu and Kamarband Caves or Belt Caves are prehistoric, archaeological sites in Iran. They are located 100 m (330 ft) apart, in a cliff on the slopes of the Alborz mountains in the village of Tarujen (currently called Shahid Abad), 5 km (3.1 mi) south west of Behshahr.

Excavations took place led by Carleton S. Coon and were reported on between 1949 and 1957. 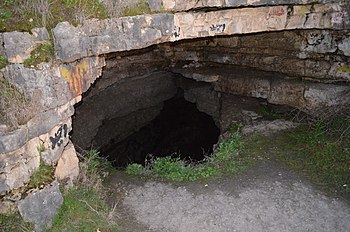 Hotu Cave has an approximate size of 30 m × 20 m (98.4 ft × 65.6 ft). The site produced pottery shards, stone tools and material that could be radio-carbon dated. Twenty-two samples were dated and attributed to eight different cultures. The 2 earliest cultures, present at around 9,910 to 7,240 years BCE are assumed to be seal hunters and vole eaters. The bones of a dog have been cited as an example of exceptionally early animal domestication.[1] Pre-Neolithic finds date to around 6,120 years BCE.

Kamarband cave is notable for three human skeletons discovered there, dating to approximately 9,000 years BCE. Other finds include flint blades, walrus and deer bones, giving valuable information about human development from the ice age in the Mazandaran area.[2]

Retrieved from "http://en.turkcewiki.org/w/index.php?title=Hotu_and_Kamarband_Caves&oldid=956961470"
This website is a mirror of Wikipedia, and is not affiliated with the Wikimedia Foundation.
Categories:
Hidden categories: