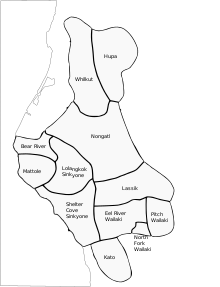 Hupa and other California Athabaskan languages.

Hupa (native name: Na꞉tinixwe Mixine꞉wheʼ, lit. "language of the Hoopa Valley people") is an Athabaskan language (of Na-Dené stock) spoken along the lower course of the Trinity River in Northwestern California by the Hupa (Na꞉tinixwe) and, before European contact, by the Chilula and Whilkut peoples, to the west.

The 2000 US Census estimated the language to be spoken by 64 persons between the ages of 5 and 17, including 4 monolingual speakers. As of 2012, there are fewer than 10 individuals whose Hupa could be called fluent, at least one of whom (Verdena Parker) is a fully fluent bilingual.[citation needed] Perhaps another 50 individuals of all ages have restricted control of traditional Hupa phonology, grammar and lexicon. Beyond this, many tribal members share a small vocabulary of words and phrases of Hupa origin.

The consonants of Hupa in the standard orthography are listed below (with IPA notation in slashes):

Notes about the consonant system and how it is written:[4]

Vowels may be lengthened.

The Hupa alphabet is as follows:

As with other Dene languages, the Hupa verb is based around a theme. Melissa Axelrod has defined a theme as "the underlying skeleton of the verb to which prefixes or strings of prefixes or suffixal elements are added in producing an utterance. The theme itself has a meaning and is the basic unit of the Athabaskan verbal lexicon." [7] In addition to a verb stem, a typical theme consists of a classifier, one or more conjunct prefixes, and one or more disjunct prefixes.[8]

According to Victor Golla (1970, 2001 and others), each Hupa theme falls into one of eight structural classes according to its potential for inflection, along the following three parameters: active vs. neuter, transitive vs. intransitive, and personal vs. impersonal. Golla (2001: 817)

Golla (2001: 818) presents examples of themes from each of the eight structural classes. Orthography has been changed to conform to the current accepted tribal orthography:

Personal O-si-ƚ-ʼa꞉n 'have (a round object) lying'
Impersonal O-wi-l-chwe꞉n 'O has been made, created'

Personal di-n-chʼa꞉t 'ache, be sick'
Impersonal kʼi-qots' 'there is a crackling sound'

Hupa verbs have pronominal (i.e., pronoun) prefixes that mark both subjects and objects. The prefixes can vary in certain modes, particularly the perfective mode (See e.g., Mode and Aspect for a discussion of modes in Navajo, a related Dene language). The prefixes vary according to person and number. The basic subject prefixes are listed in the table below:

The Hupa free personal subject pronouns are as follows:

Golla (2001:865-6) notes that the 3rd person free pronouns are very rarely used, with demonstrative pronouns being used in their place.

Retrieved from "http://en.turkcewiki.org/w/index.php?title=Hupa_language&oldid=972415814"
This website is a mirror of Wikipedia, and is not affiliated with the Wikimedia Foundation.
Categories:
Hidden categories: