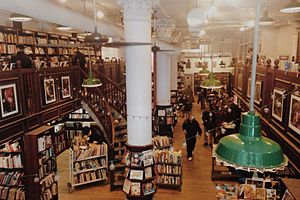 In 1990, four members of the AIDS activist group ACT UP—Keith Cylar, Charles King, Eric Sawyer and Virginia Shubert—decided to dedicate themselves to serving one of New York City’s most neglected populations: the tens of thousands of homeless men, women, and children in New York City living with HIV and AIDS. The activists called their new group Housing Works because they believed that stable housing was the key to helping HIV-positive people live healthy and fulfilling lives and to prevent the further spread of the virus.[2]

In late-2019 and into 2020, Housing Works leadership began engaging in what many progressive leaders and labor organizations classify as union busting after the staff began a worker-led unionization effort to address a host of issues (such as workplace safety, benefits, and a lack of a living wage for many workers while some of the organization's executives receive six-figure salaries) impacting staff and the quality of service they provide to their community.[3] Despite their assertion that they are not anti-union, Housing Works has retained a known "union busting" firm, Seyfarth Shaw LLP, "which prides itself as keeping workplaces 'union-free,' according to its website, and has a history of cases that include working against the 1960s agricultural labor activist Cesar Chavez and defending Harvey Weinstein’s film company against a slew of sexual harassment claims."[4]

Founded in 1994 and located in Soho on Crosby St, the bookstore cafe[5] is a successful entrepreneurial business raising money to support the Housing Works mission. Run primarily by a team of specially trained volunteers, the bookstore is funded entirely by donations, and resells both in the retail space and online. Free and ticketed events[6] occur throughout the week, and the space is available for privately rented parties, lectures, and is a very popular wedding destination. Events range from story time and sing a long for babies, a middle-grade book group,[7] storytelling, trivia, screenings, activist talks, comedy, music, and performance (artists include Iron and Wine,[8] Bjork, The Black Keys, Conor Oberst, and more), and many literary events celebrating established writers and new talent. The venue hosts twice-monthly editions of The Moth StorySLAM. The Cafe & bar is fully licensed to sell beer, wine, liquor, and hot and cold drinks in addition to a range of food items. The space has been featured in numerous movies and TV episodes, most recently Law & Order SVU.

Housing Works is well-known to New Yorkers for its chain of upscale thrift shops. The New York Times has mentioned the shops in its neighborhood reviews.[9] Housing Works Thrift Shop is featured in Seinfeld episode 173, "The Bookstore". George is forced to buy a book from Brentano's Bookstore because he took it in the restroom. He then tries to donate it to Housing Works Thrift Shop and claim a $200 tax write off but the clerk at the thrift shop used to work for Brentano's so she recognizes the book has been flagged that it has been in the restroom and runs him out of the store.

Housing Works is involved in advocating for health care reform and affordable housing.[13]

In October 2019, Housing Works organized a mass demonstration outside of the Supreme Court in support of LGBTQ civil rights, resulting in over 100 activists being arrested.[14]

Retrieved from "http://en.turkcewiki.org/w/index.php?title=Housing_Works&oldid=939642650"
This website is a mirror of Wikipedia, and is not affiliated with the Wikimedia Foundation.
Categories:
Hidden categories: