Jump to navigation Jump to search
1958 film by Melville Shavelson

Houseboat is a 1958 American romantic comedy film directed by Melville Shavelson. Both the love theme "Almost In Your Arms", sung by Sam Cooke and "Bing! Bang! Bong!", sung by Sophia Loren, were written by Jay Livingston and Ray Evans. It was presented in Technicolor and VistaVision.

Starring Cary Grant, Sophia Loren, Martha Hyer, Harry Guardino, the film was written by Shavelson and Jack Rose (based on an original script by Grant's wife at the time, Betsy Drake). It was released on November 19, 1958.

For over three years, Tom Winters (Cary Grant) has been separated from his wife and their three children: David (Petersen), Elizabeth (Gibson), and Robert (Herbert). The film begins as he returns home from Europe following his wife's death. The children want to stay in the country with their mother's wealthy parents and her sister Carolyn (Hyer), but Tom takes them to Washington, D.C., where he works in the US State Department.

The children resent their father, who spends the days giving them historical tours of the Washington sites. One evening, Winters takes the children to a classical outdoor concert, which clearly bores the children. We see Cinzia (Sophia Loren) for the first time watching the orchestra from the side wing. Cinzia then argues with her father backstage before escaping through a window onto the lake behind. She takes a rowing boat where Robert suddenly materializes, having also run away. They go to a funfair on the other side of the lake. Robert has money for pizza but Cinzia does not, she cheats him out of a slice by "showing him how to eat it correctly" She then compensates for this by winning him a harmonica on one of the side shows. She is enchanted by little "Roberto" and his harmonica. When she brings him back home, Tom offers her a job as a maid, unaware she is the daughter of a famous Italian orchestra conductor. Due to her love for the children she accepts.

Carolyn offers Tom and the children her old guest house. This is to be moved on a trailer to a new location. However, while the guest house is being towed down the road, it hits Tom's car, just as it straddles a railtrack. No-one listens to the children pointing out the bigger problem and the guest house is struck by a train. The tow-truck driver, Angelo Donatello (Guardino), feels guilty, and sells Tom his leaky, run-down, old houseboat.

Once moved in, Tom discovers that Cinzia is unable to cook, do laundry, or even make coffee. Carolyn and others incorrectly assume that Cinzia's relationship with Tom is sexual, while Cinzia innocently wins the affection of Tom and the children. Meanwhile, Tom spends his evenings with Carolyn (who has left her husband), who is secretly in love with him. On the 4th of July, she tries to embarrass Cinzia by selecting a gaudy dress for Tom to buy for her, but Cinzia transforms it into an elegant evening gown. She looks so beautiful in the gown that Angelo, a confirmed womanizer, cancels a date with her, in fear of falling in love and proposing to her.

That evening, Carolyn arrives at the boat with Captain Alan Wilson (Murray Hamilton) and his wife. Alan, who is somewhat drunk, jokes about Cinzia's living arrangement with Tom and slaps her on the behind as she serves drinks. She calls him an ill-mannered lout and throws a drink in his face before going to her room to cry. Tom asks Alan to leave the boat, but Carolyn takes Alan's side, following which Tom asks all three guests to leave. David cheers Cinzia up, and they make plans to go fishing, but Tom ruins David's plans by inviting Cinzia to the country club dance. Once there, Tom reconciles with Carolyn, and they agree to get married. As he dances with Cinzia, he finally realizes he is in love with her, but she learns of the proposal, becomes upset, and runs away. Tom catches her and breaks it off with Carolyn. A little while later, David unhappily finds Tom and Cinzia passionately kissing in a rowboat. The movement of the rowboat rings a bell in David's room and he covers his ears.

The children do not want Tom to marry Cinzia. David calls her ugly, Robert rejects her as a mother figure, and Elizabeth wants to continue sleeping in Tom's bed with him. Discouraged by this, Cinzia returns to her father, Maestro Zaccardi, but Tom follows her and she accepts Tom's wedding proposal.

The wedding takes place on the houseboat. Carolyn serves as maid of honour. The children initially refuse to participate in the ceremony, but as it begins, Elizabeth and David join Tom and Cinzia at the altar, and Robert joins them, playing "Here Comes the Bride" on his harmonica. 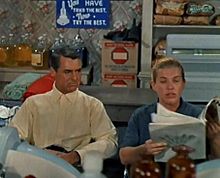 Grant's wife Betsy Drake wrote the original script, and Grant originally intended that she would star with him. After he began an affair with Loren while filming The Pride and the Passion (1957), Grant arranged for Loren to take Drake's place with a rewritten script for which Drake did not receive credit. The affair ended in bitterness before The Pride and the Passion's filming ended, causing problems on the Houseboat set. Grant hoped to resume the relationship, but Loren agreed to marry Carlo Ponti instead.[2]

Retrieved from "http://en.turkcewiki.org/w/index.php?title=Houseboat_(film)&oldid=966530375"
This website is a mirror of Wikipedia, and is not affiliated with the Wikimedia Foundation.
Categories:
Hidden categories: