Hot 'n Now is an American fast-food restaurant based in Holt, Michigan.[1] Founded in 1984, the chain once grew to more than 150 locations throughout the United States at its peak. Subsequently, under the ownership of PepsiCo, the chain filed for bankruptcy in 2004, and was then sold to STEN Corporation. As of September 9, 2016, only the Sturgis, Michigan location remains in operation.[2] The majority of the chain's locations focused entirely on drive-thru service, featuring a small-footprint building with a tall, slanted roof style.[3] Some previous locations were more traditional fast-food locations, complete with seating, and others were combined with gas stations.[4] 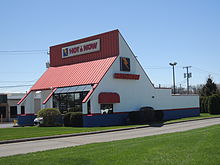 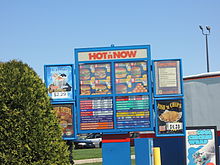 Hot 'n Now was founded in Kalamazoo, Michigan in 1984 by William Van Domelen.[5] Van Domelen had opened the first Michigan Wendy's restaurants and a franchisee of Burger Chef in Southwest Michigan.[6]

By 1990, the chain operated more than 100 stores in 15 different states.[5] That same year, it was acquired by PepsiCo,[7] which placed operations under its Taco Bell unit. Van Domelen resigned from the company soon after the sale.[8]

Richard Loehr, an automobile dealership owner, purchased a franchise for Broward County, Florida, in January 1990. By the end of 1995, Loehr had five locations, but he wanted out. Hot 'n Now would not buy his locations after initially showing interest and blocked any sale to other parties.[5] Profits dropped after 1993 for Loehr's locations. Loehr laid off all 300 employees and closed his six locations by March 1995. On March 16, 1995, Loehr filed a lawsuit against Taco Bell.[8] The case went to trial in December 1998.[5]

In October 2003, Proquest Capital Corporation acquired Hot 'n Now assets and some liabilities from Hot 'n Now, LLC. Proquest was soon renamed to Hot Brands, Inc. At the time of acquisition, the chain had 44 locations, 23 corporate and 21 franchisee owned, in three states: Michigan, Wisconsin, and Indiana.[10]

In 2004, the company filed for Chapter 11 bankruptcy and was then sold to STEN Corporation, which also owns the Burger Time chain.[11] Burger Time was sold to BTND, LLC,[12] which owns the Hot 'n Now name.[13]

One of last two locations, which was in Bay City, Michigan suffered a fire on September 5, 2016.[11] Only the Sturgis, Michigan, location now remains, though Hot 'n Now's popular Olive Burger and cheesy tots are still on the menu at the Bay City location, now known as Burger 81.[6]

The chain briefly used the characters from Mad magazine's "Spy vs. Spy" in its advertising.

Retrieved from "http://en.turkcewiki.org/w/index.php?title=Hot_%27n_Now&oldid=936719849"
This website is a mirror of Wikipedia, and is not affiliated with the Wikimedia Foundation.
Categories:
Hidden categories: