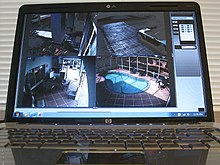 According to an FBI report, 58.3 percent of burglaries in the United States involved forcible entry. Per the most recent statistics, the average burglary in the United States lasts for about 90 seconds to 12 minutes and, on average, a burglar will break into a home within 60 seconds.[1][2] Most thefts target cash first followed by jewels, drugs, and electronics.[3] Common security methods include never hiding extra keys outside, never turning off all the lights, applying small CCTV stickers on doors, and keeping good tabs with neighbours.

Marie Van Brittan Brown was an African-American inventor who invented the home security system (U.S. Patent 3,482,037) in 1966, along with her husband Albert Brown. They jointly applied for a patent, which was granted in 1969.

One main component to home security is finding an area for easy programming and interaction for users. A control panel is implemented to arm and disarm a home security system. The control panel is the main connection to the alarm company monitoring a home. It typically features a touchpad or buttons to easily maneuver the system, and some newer systems also feature voice control or wireless remotes (key fobs).[4]

Some people simply leave the lights or their TV turned on while they're gone. But in this day and age smart home has got more advanced. New gadgets are emerging with the specific purpose of simulating presence. They do this through movement simulation by using light- and shadow-effects at night or sound simulation at daytime. [5]

Surveillance cameras used in the home are IP cameras or closed circuit. IP cameras connect over the internet and stream to users’ phones using a Wi-Fi connection. Closed-circuit, or CCTV cameras through wired or wireless links. [6] These cameras stream live footage to users, allowing them to watch for suspicious activity.

Current cameras feature abilities such as motion detection and two-way audio, allowing users to receive notifications of activity and speak and listen through the camera. Home surveillance cameras used for security purposes have become more accessible, but have sparked security concerns from consumers.[7]

Surveillance cameras and motion sensors work hand in hand with allowing home owners to keep an eye on areas of their home that they might not have access to at the moment. Motion sensors create zones which cannot be accessed without sounding an alarm. Cameras do not typically do this but most home security systems can be set up to have any movement detected on a camera to be displayed on the owner's account.[4]

Glass break detectors are usually installed near glass doors or a window front of a store. This equipment uses a microphone to detect when a pane of glass is broken or shattered. By monitoring the sound and vibrations the alarm only reacts to sounds above a certain threshold to avoid false alarms.[4]

High-decibel alarms ensure that a break in will not go unnoticed. These alarm systems are loud enough to where neighbors are ensured to hear it.[4] They are also implemented with the intention to frighten an unwanted intruder.

All of the technology based security hardware work hand in hand with the control panels in a house to relay all messages to the monitoring company. Home owners rely heavily on these systems to ensure their safety, and without the control panel monitoring everything happening within the home this is impossible.

Some forecasts project the home security market as a whole will be worth $47 billion by 2020,[8] with the DIY home security market worth $1.5 billion.[9] While the market for home security is expanding, especially with cable TV and Internet service providers introducing their own security and home automation products, it is a fragmented market, with "a massive array of large and small rivals". The US market leader is ADT with more than 6 million households subscribed.[10]

The FBI reported that 1.7 million homes were burglarized in 2014.[2] The same report shows that an estimated loss of $3.9 billion was suffered by the victims in the same year. Overall, when the average value was applied to the estimated number of burglaries, the average dollar loss per burglary offense was $2,251. Roughly, there are 2.5 million burglaries a year with 66% being home break-ins. Police typically only solve 13% of break-in crimes due to lack of information and witnesses.[11]

It is reported that 53% of break-ins occur during the day and 47% occur at night. Break-ins are 6% more likely to occur between 6am and 6pm while most are out of the house.[11]

With only 17% of homes being equipped with home security systems, many burglars are attracted to homes lacking a system. 95% of break-ins require some type of forceful entry (breaking a window, lock picking, kicking in doors). Some common tools used for break-ins are pliers, screwdrivers, and hammers. This makes it hard to see break-ins coming since they are common household tools.[11]

This article incorporates public domain material from websites or documents of the United States Department of Justice.

Retrieved from "http://en.turkcewiki.org/w/index.php?title=Home_security&oldid=940804471"
This website is a mirror of Wikipedia, and is not affiliated with the Wikimedia Foundation.
Categories:
Hidden categories: