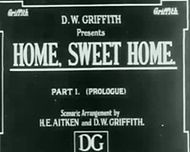 John Howard Payne leaves home and begins a career in the theater. Despite encouragement from his mother and girlfriend, Payne begins to lead a dissolute life that leads to ruin and depression. In deep despair, he thinks of better days, and writes a song, Home! Sweet Home! that later provides inspiration to several others in their own times of need.

Retrieved from "http://en.turkcewiki.org/w/index.php?title=Home,_Sweet_Home_(1914_film)&oldid=941145221"
This website is a mirror of Wikipedia, and is not affiliated with the Wikimedia Foundation.
Categories:
Hidden categories: