The Helsinki University of Technology (TKK; Finnish: Teknillinen korkeakoulu; Swedish: Tekniska högskolan) was a technical university in Finland. It was located in Otaniemi, Espoo in the metropolitan area of Greater Helsinki. The university was founded in 1849 by Grand Duke of Finland, Emperor Nicholas I and received university status in 1908. It moved from Helsinki to Otaniemi campus area in 1966. It was merged into Aalto University in 2010 and briefly had the name Aalto University School of Science and Technology before being split into four schools in 2011.

Much of the university's Otaniemi campus was designed by Alvar Aalto. 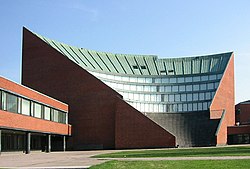 Alvar Aalto's landmark auditorium of the main building. The amphitheatre-like structure contains the main auditoriums, while its exterior can be used for plays and other activities.

The main library of the university, designed by Alvar Aalto and built in 1970.

In 1849, TKK was established in Helsinki by the decree of the Russian Emperor Nicholas I, Grand Duke of Finland as a "manufacture and handicraft school", with the name Helsingin teknillinen reaalikoulu/Helsingfors tekniska realskola, along with two other similar schools, situated in Vaasa and Turku. In 1872, the school's name was changed to Polyteknillinen koulu/Polytekniska skolan ("Polytechnical School") and in 1878, to Polyteknillinen opisto/Polytekniska institutet ("Polytechnical Institute"), while the two other manufacture and handiwork schools were demoted to institutions of lower level. As the proportion of matriculation diploma holders in the student intake gradually increased, the school gained more social respectability. In 1908, TKK was given university status along with its present name, thus becoming the second university to be founded in Finland. In 1955, building of the new campus area started with the housing village. In 1966, TKK moved from Helsinki to the new campus in Otaniemi, Espoo.

All engineering programmes offered by TKK led to the degree of diplomi-insinööri ("engineer with university diploma"), a five-year master's degree. The only exceptions to this were the architecture programmes that lead to the master's degrees of architecture and landscape architecture. From 2005, according to the Bologna process, all students might also complete an intermediate degree (tekniikan kandidaatti, TkK) before the DI or architect's degree. This degree is considered a bachelor's degree and enables enrollment in foreign universities where a bachelor's degree is required. TKK did not offer programs terminating in a bachelor's degree; a student might only be accepted to study for the Master's level degree. TKK required a bachelor's degree from foreign students studying in English, because only Master's studies were offered completely in English. 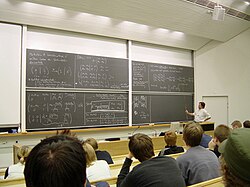 A lecture of mathematics for undergraduates inside the main building.

The university was organized in four faculties, each consisting of departments and separate laboratories, and separate units not operating under any faculty.

Additionally, TKK participated in various joint units with other Finnish universities and the VTT Technical Research Centre of Finland:

TKK participated in 12 Centres of Excellence (huippuyksikkö), selected by the Academy of Finland to represent the top research in the country and receiving separate, fixed-period funding from the Academy.

Researchers at TKK have achieved notability in, among other things, low temperature physics (holding the current world record for the lowest temperature achieved), the development of devices and methods for magnetoencephalography, mobile communications, wood processing, and neural networks, with professor Teuvo Kohonen initiating research in self-organizing maps. Additionally, the first commercialised total synthesis, the synthesis of camphor, was invented by Gustaf Komppa, the first professor of chemistry at TKK[37] and the Nobel laureate (chemistry, 1945) Artturi Virtanen held a professorship in biochemistry at TKK. More recently, the university has notably invested in the research of nanotechnology, operating the largest cleanroom facility in Northern Europe[38] and of the largest microscopy clusters in Europe.[39]

The Nokia Research Center has operated a "lablet" on university premises since 2008, in order to establish joint research programs and daily interaction between Nokia and university researchers, who would share the same facilities.

TKK was located in Otaniemi, Espoo. Several high-tech companies, the Finnish forest industry's joint experimental laboratory KCL, and business incubators Innopoli and Technopolis are also situated there. It is also directly adjacent to Keilaniemi, with Life Science Center and the headquarters of several notable Finnish companies, such as Nokia and Fortum. The area is connected by a 15-minute bus ride to the center of Helsinki. 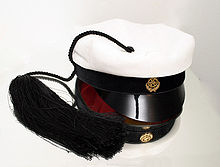 A traditional Finnish technology student's hat (teekkarilakki), the TKK(TF) type, photographed on top of a mirror.

TKK was known for its active student community and technology students (teekkaris) are highly noticeable, as they wear a distinctive hat and often brightly colored overalls to many of their public events. The community has also organised important charity events (tempaus in local language). TKK students are also famous for, and Finland's leading practitioners of, student pranks (jäynä), similar in principle to MIT hacks. Their most widely publicised stunt took place in 1961, when a team of students smuggled a statue of Paavo Nurmi onto the 300-year-old wreck of Regalskeppet Vasa just days before its lifting from the bottom of the sea.[40]

The housing area of Otaniemi campus, known as Teekkarikylä (technology student village), was owned mostly by the student union and partly by HOAS (Helsinki Student Housing Fund). The housing was characterised by the presence of foreign students of many nationalities. As of 2005, the village offered housing for approximately 2,600 students.[45]

Construction of the Otaniemi campus was started in 1950, in order for the first buildings to host the athletes of the 1952 Summer Olympics in Helsinki. Some of the building material originally used for the campus was acquired from the former Soviet Union embassy, which had been destroyed during World War II,[46] as a result of bombings by Soviet Union itself. Later the student housing has been used for housing athletes again in a number of athletics events, sometimes to the dismay of the students that have to move out during the events. The quality of the Otaniemi student housing holds a high standard in international comparison.

The campus contains the former student union building and convention centre Dipoli, named as the second Poli, the second building of the polytechnic students. The original first building being located formerly in the Helsinki centre. Dipoli was designed by Reima and Raili Pietilä and was completed in 1966. However, in 1993 the building was transformed into a training centre of the university. The ownership of the property was later transferred from the student union to the university itself, due to high maintenance costs. It is regularly used for conventions, congresses and student parties.

List of student associations of the Helsinki University of Technology[edit]

Currently this list includes only the associations known to have English Wikipedia articles.

Retrieved from "http://en.turkcewiki.org/w/index.php?title=Helsinki_University_of_Technology&oldid=963959062"
This website is a mirror of Wikipedia, and is not affiliated with the Wikimedia Foundation.
Categories:
Hidden categories: