Help:Creation and usage of media files 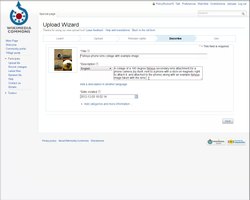 Play media
A screencast that walks through how to upload files to Wikimedia Commons and add them to Wikipedia articles.

Images, audio and video files must be uploaded into Wikipedia using the "Upload file" link on the left-hand navigation bar. Only logged in users can upload files. Once a file is uploaded, other pages can include or link to the file. Uploaded files are given the "File:" prefix by the system, and each one has an image description page. Please consider uploading freely licensed content to the Wikimedia Commons instead of here. This allows the files to be used in articles instantly by all Wikimedia projects. Files from Wikimedia Commons use the same syntax described below, there is no extra step needed. The maximum size of an uploaded file is 100 megabytes. As of March 2012[update], the following file types may be uploaded: png, gif, jpg/jpeg, xcf, pdf, mid, ogg/ogv/oga, svg, djvu. All others are prohibited for security reasons, and pdf and djvu are intended primarily for projects like Wikisource.

If you want to give a link to the file description page in an article, use an extra colon at the front, e.g., "[[:File:pagename". If you type "[[Media:pagename]]", a download link to the media file is created. The page name will contain the file type such as pagename.jpg.

It is not necessary to upload images to use special characters or even complex mathematical expressions.

Wikipedia uses a UTF-8 encoding scheme, which means that any Unicode character can and should be entered directly. See m:Help:Special characters for details and help. (You can also use SGML entities for certain characters, such as &amp; for & or &#233; for é.)

For mathematical formulae, we use TeX markup. For help and instructions, see m:Help:Formula.

Please do not upload plain text (.txt), Microsoft Word (.doc), or text files in other formats. Instead, please start a new page and input the text using standard wiki formatting. Please do not dump text into Wikipedia unless you wrote it yourself, or you know that it meets the project's stringent copyright licensing requirements.

In rare cases an HTML file is uploaded, for example as a test or demonstration.

Occasionally a PDF file is uploaded. However, most PDFs should be converted into wikitext. Source documents should be uploaded to Wikisource instead.

For a discussion on uploading spreadsheets, see the talk page.

Typically the first step in using an image or other media file is to upload it to Wikimedia Commons, but for legal reasons, some files must be uploaded to the English Wikipedia instead. Wikipedia:Upload helps you to choose between these options.

Images can be displayed directly on Wikipedia pages.

The preferred formats are JPEG for photographic images and Scalable Vector Graphics (SVG) for drawings, though PNG can also be used. Vector graphics are preferred to raster graphics for drawings, because they can be scaled as needed without losing information, and can be edited more easily.

Wikipedia uses the Ogg Vorbis, FLAC and WAV format for audio, as they are not encumbered by patents (an issue that prompted the decision in 2004 that MP3 files would not be hosted at Wikipedia[1]). Since then, the MP3 patents have expired and Wikimedia legal has given permission to allow uploading as needed by Wikimedia or its communities[2].

Software supporting Vorbis exists for many platforms. Mozilla Firefox 4, Opera 10.5 and Google Chrome 3 and later each include their own support for Ogg Vorbis files. As for multimedia players, Winamp can be used to play Ogg Vorbis files. Although iTunes does not natively support Vorbis, Xiph.Org provides a QuickTime component which can be used in players that rely on QuickTime, such as iTunes, on both Microsoft Windows and Mac OS. DirectShow filters exist to decode Vorbis in multimedia players like Windows Media Player and others which support DirectShow.

The Vorbis Software Players node at the xiph.org wiki has an up-to-date list of Vorbis-supporting software for all operating systems. Users can test these players using the list of Vorbis audio streams available at [1].

Most viable is to use Template:Listen, see its page for detailed description, common usage is listed here:

There are several other audio templates used primarily for demonstrating pronunciation of foreign languages or obscure terms, such as {{audio-IPA}}. When adding a sound file to an article, such as English language or Irish phonology avoid using a template that only links to the raw sound file, as this effectively hides important licensing information that allows readers to see who created and uploaded the file, its source and under what license it was published.

Wikipedia uses WebM and Ogg Theora for video because they are open source and royalty-free. Since most popular movie/audio formats are patented and require a royalty, there are no free all-purpose video converters. See also WikiCommons' Theora video conversion help page.

For assistance with conversion, consider contacting the following editors:

Play media
Television clip of Buzz descending the ladder and stepping onto the moon.

The easiest way to embed video directly into an article is by using the same [[File:]] tag as for image files. The result is on the right.

[[File:A11v 1094228.ogv |thumb |200px |alt=A spacesuited astronaut slowly climbs down a ladder on a complicated metal structure, and then hops the last step onto a bright terrain. |Television clip of Buzz descending the ladder and stepping onto the moon. ]]

By default, a frame from the midpoint of the video is used for the initial still image. To use a different frame, use the thumbtime parameter. For instance:

[[File:Bombers of WW1.ogg |thumbtime=3 |thumb |200px |alt=World War I era biplanes on bombing runs, captioned "Captain 'Eddie' Rickenbacker, American 'Ace of Aces,' over the lines – looking for a scrap." then "Bombing the German lines." |"Bombers of WW1" with a still from 3 seconds]]

Specify the time in seconds, or use colons to separate hours, minutes and seconds. 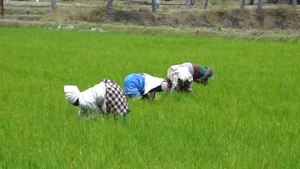 Allows embed code to reference a segment of the video stream or set a start time. Hover over the player to see start time listed as 5s, press play and notice it stops playback at 7 seconds.

[[File:Weeding.ogv|thumb|300px|start=5|end=7|Starts at 5 seconds and ends playback at 7 seconds]]

One can also use MM:SS or HH:MM:SS format for start and end.

Note: This is not yet supported on Safari and Internet Explorer.

Linking to a video[edit]

There are two types of links to a video:

Play media
some text you prefer

Many files have been uploaded to Wikipedia. A long-term project under way is to move free content files—including images and audio—to Wikimedia Commons. Commons provides a central location for files for use on all Wikimedia Foundation projects.

Commons employs more restrictive policies on copyright issues than the English Wikipedia does; for instance, fair-use images such as most images of album cover art cannot be hosted on Commons.

Find this page confusing? Just use this link to ask for help on your talk page; a volunteer will visit you there shortly!

Retrieved from "http://en.turkcewiki.org/w/index.php?title=Help:Creation_and_usage_of_media_files&oldid=962457727"
This website is a mirror of Wikipedia, and is not affiliated with the Wikimedia Foundation.
Categories:
Hidden categories: