Harsh Vardhan Shringla (born 1962) is a retired Indian diplomat of IFS cadre who served as the 33rd Foreign Secretary of India from 29 January 2020 to 30 April 2022[5][6] He previously served as the Ambassador of India to the United States of America, Ambassador to Thailand and High Commissioner to Bangladesh.[7][8][9]

Harsh Vardhan Shringla graduated from the St. Stephen's College, Delhi University after being schooled at Mayo College, Ajmer. He worked in the private and public sectors in India prior to joining the Indian Foreign Service. He has published papers on conflict prevention, economic diplomacy, the Indian diaspora, and India-Bangladesh relations.[10]

Ambassador Shringla joined the IFS in 1984 and in the course of a diplomatic career spanning over 35 years, he has held a variety of positions in the Ministry of External Affairs (India), New Delhi and abroad. He has served as Ambassador of India to the United States, High Commissioner of India to Bangladesh and Ambassador of India to the Kingdom of Thailand. He has also served in France (UNESCO); India's Permanent Mission to the United Nations in New York; Vietnam (Hanoi and Ho Chi Minh City); Israel and South Africa (Durban).[11]

Ambassador Shringla has served in the Ministry of External Affairs, New Delhi as Joint Secretary (Director General) responsible for Bangladesh, Sri Lanka, Myanmar and Maldives. He has also headed the United Nations Political and SAARC Divisions in the Ministry. Earlier, he served as Director of the Northern Division dealing with Nepal and Bhutan and as Deputy Secretary of the Europe West Division.[11]

Ambassador of India to Thailand[edit]

Ambassador Shringla went on his first Ambassadorial assignment to the Kingdom of Thailand and served for two years from January 2014 to January 2016. During his tenure, a number of initiatives between India and Thailand in the political, security, economic and cultural domains brought the two countries closer.[12]

High Commissioner of India to Bangladesh[edit]

Ambassador of India to the United States[edit]

Ambassador Shringla assumed charge as Indian Ambassador to the United States on 9 January 2019 at the age of 55 years making him the youngest Ambassador of India to the United States. He presented his credentials to the President of the United States Donald Trump on 11 January 2019, just two days after his arrival.[17] On 7 February 2019, he received a rousing welcome at the Congressional Reception hosted by the Senate India Caucus and Congressional Caucus on India and Indian-Americans which was attended by an unprecedented 67 Members of the US Congress, including Senators.[18]

In a short but intense period of just one year, Ambassador Shringla exponentially expanded the Embassy's outreach to the US Congress, the Indian-American community, Indian students in the US, think-tanks, pushed for a whole of government approach in the India-US trade talks and significantly raised the visibility of the India growth story beyond Washington DC in the United States.[19]

A focused outreach in Congress was a central prong of this outreach - Ambassador Shringla personally met with 160 Members of Congress.[20] He addressed and interacted with members of all major think-tanks in Washington DC including the Heritage Foundation, the Hudson Institute, Brookings, Atlantic Council, Center for American Progress.[21]

Ambassador Shringla's attention to the issues faced by the Indian student community in the US was drawn soon after his arrival in the wake of the Farmington University crisis. With 129 students arrested and detained, Shringla working along with the Embassy team and the Consulates ensured consular access to each and every detained student and all students were either released or allowed to go back to India within about a month.[22] At the same time, to prevent such incidents from recurring, a detailed press release was issued in India and in the US to raise awareness among the Indian student community about the risks of being entrapped in fake universities. Ambassador Shringla was a strong advocate on the issue of visas for high-skilled professionals, raising the issue with relevant US lawmakers and administration agencies to highlight the contributions of Indian professionals to the competitiveness of US companies facing a STEM skills shortage.[19] In his travel across 21 US states, Ambassador Shringla made a concerted effort to reach out to students. In separate visits, he addressed about 300 students at the University of North Carolina-Chapel Hill, at the Stanford Graduate School of Business, at the Harvard Kennedy School, at Georgetown University and hosted Indian students at the Embassy for a "chai and chat" session. He also addressed Indian students in various US universities over video-link.[23]

The biggest event undoubtedly was Howdy Modi in Houston on 22 September 2019 where Prime Minister of India, Shri Narendra Modi was joined by the President of the United States Donald J. Trump to jointly address a gathering of over 50,000 Indian-Americans and 22 Members of US Congress, Senators and Governors, making it the largest event for a foreign Head of Government visiting the United States.[24] The event was a crowning moment of an extremely successful visit by the Prime Minister of India to the United States during which he was awarded the Global Goalkeeper Award by the Bill & Melinda Gates Foundation in recognition for the Swachh Bharat mission and was keynote speaker at the Bloomberg business event.[25] He also had a productive bilateral meeting with President Trump in New York.[26] The Prime Minister's meeting with top American energy sector CEOs in Houston also shone a light on the rapid progress being made in energy cooperation between India and the United States. India is now importing nearly $6 billion worth of oil and natural gas and imports are slated to increase to $8 billion in 2020.[27]

The booming energy relationship also contributed to reducing the trade imbalance and finding a mutually beneficial understanding of trade issues - a priority that he worked on actively during his tenure. His approach on strengthening trade and economic ties has been coordinating a whole of government approach in Delhi and taking the trade and investment potential conversation beyond Washington DC in the United States. For instance, to address the ground handling issue that had been simmering for some time, Shringla helped fast track inter-ministerial discussions in Delhi to find a solution. In each of the 21 US states he visited, priority was accorded to engage with business chambers and companies - Indian companies with a presence in the US and American companies invested or inclined to invest in India. In Denver, Colorado he addressed 150 senior US State trade development officers at the State International Development Organization (SIDO) Conference on US-India Trade and Investment Ties where he emphasized the growing economic relationship between the US and India and stated that 14 different US states and counties had opened trade offices in India.[28]

In another event in Washington, DC hosted by the Wilson Center in Partnership with NASSCOM, he highlighted the contributions made by Indian companies in the US in different sectors.[29] In San Francisco, speaking at a panel discussion with the Lt. Governor of California, Eleni Kounalakis at the Bay Area Council Pacific Summit on Economic Prosperity in the Century of the Pacific on 21 June 2019, Shringla spoke at length about the business opportunities in a rising India and urged the Governor to lead a business delegation to India as well as open a trade office in India.[30] Lt. Governor Kounalakis led a trade delegation to India in January 2020. In 2019, 4 Governors led trade delegations to India, including the Governors of Indiana, New Jersey, Colorado, and Arkansas. The Governor of Delaware is expected to lead a trade delegation to India.[31]

Shringla continued the focus on the steadily strengthening India-US defense ties.[32] The comprehensive Joint Statement issued at the 2+2 Dialogue held in Washington DC on 18 December 2019, reflected the significant progress made over a short span of time.[33][34] Bidding farewell to Shringla at the historic Blair House in DC, US envoy and Acting Assistant Secretary of State for South and Central Asia Alice Wells praised him for his work and said, "we are going to have a captain of the relationship and somebody who will be committed to doing the delicate work that needs to be done to stitch two very important countries together".[35][36] On his last day in US, Shringla had a farewell call on President Donal Trump.[37] On 12 January 2020, he left for India, completing his assignment in the United States on a very high note meeting over 160 lawmakers, visiting 21 US states and bringing a new energy to the India-US relations during his eventful one-year stint as Ambassador of India to the United States.[38][39]

While Ambassador, Shringla was reported to have worked with the lobbying firm Cornerstone to prevent the passage of a resolution condemning the revocation of the special status of Jammu and Kashmir.[40] 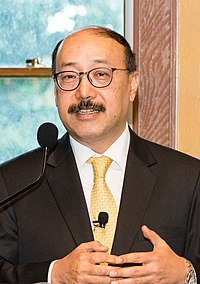 Shringla speaking on GU India Initiative on April 23, 2019, at the Georgetown University in Washington, D.C.

On 29 January 2020, Shringla assumed the charge of Foreign Secretary of India as the 33rd Foreign Secretary. While addressing media ahead of taking charge, Shringla acknowledged the responsibilities and challenges that come with it and added that he will work under the leadership of Prime Minister and Foreign Affairs Minister of India for a more secure and prosperous India.[41] Shringla facilitated the signing of 28 investment pacts between Russia and India in December 2021. These deals included the delivery of long range S-400 air-to-surface missiles produced by Russia, which triggered questions on the possibility of U.S. sanctions on India after some speculated that these acts could be a potentially applicable to the Countering America's Adversaries Through Sanctions Act.[42]

In December 2021, Shringla visited Myanmar and emphasized India's interest in seeing Myanmar's return to democracy at the earliest; release of detainees and prisoners; resolution of issues through dialogue and complete cessation of all violence in relation to the 2021 Myanmar coup d'état.[43]

On April 4, 2022 it was announced that he will be succeeded by diplomat Vinay Mohan Kwatra as the 34th Foreign Secretary of India upon his superannuation of the post.[44] Shringla has been appointed India's Chief G20 Coordinator, as India will take over the G20 presidency in December 2022 and host the G20 Summit in 2023.[45]

Shringla has written extensively on a number of topics such as international economy, climate change, preventive diplomacy and India-US bilateral relations, including The United Nations and Conflict Prevention: Balance Between Sovereignty and Action (Indian Journal of International Law)[46] and Project Granite at the New International Airport in Israel (CUTS International, 2011).[47]

Shringla has actively contributed articles in some of the most popular international newspapers and magazines on a diverse range of topics including an Op-ed piece in The New York Times, India Is Building a More Prosperous Kashmir giving the context and objectives of India's decision to abrogate the temporary Article 370 in Jammu and Kashmir.[48] The article and other public statements by him were, per his role, both in anticipation of and in response to concern expressed by other states, including Pakistan.[49][50]

As Foreign Secretary of India, he has written extensively on India's response to COVID-19, including an article titled India is a constructive, dependable actor globally in India's national daily, Hindustan Times in which he argued that India's handling of the COVID crisis has been a positive one, especially in comparison to many other large countries.[51]

Ambassador Shringla is an avid reader and sports enthusiast, with an interest in mountaineering and hockey. He had been on a number of mountain expeditions including to Everest Base Camp, Friendship Peak in Himachal Pradesh. He was a liaison officer for the Kailash Mansarovar Yatra in 1996. He represented St. Stephen's College, Delhi in hockey at inter-college and other tournaments and received College Colors for this.[11]

Shringla was born in Mumbai, to a Buddhist Sikkimese father and a Hindu mother. His father was also part of the Indian civil service.[52] He speaks French, Vietnamese and Nepali apart from English and other Indian languages.[52] He is married to Mrs. Hemal Shringla and has one son.[11]

His surname, Shringla is a birth record misspelling of Tshering la, his father's surname.

Retrieved from "http://en.turkcewiki.org/w/index.php?title=Harsh_Vardhan_Shringla&oldid=1087572078"
This website is a mirror of Wikipedia, and is not affiliated with the Wikimedia Foundation.
Categories:
Hidden categories: