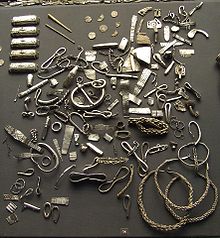 The mixed Viking Cuerdale Hoard, deposited in England before c. 910, also contains 8,600 coins, as well as these ingots and pieces of jewellery and plate.

Hacksilver (sometimes referred to as hacksilber) consists of fragments of cut and bent silver items that were used as bullion or as currency by weight in antiquity.

Hacksilver was common among the Norsemen or Vikings, as a result of both their raiding and trade. Hacksilver may also have been used by Romans in their dealings with Pictish tribes.[1] The name of the ruble, the basic unit of modern Russian currency, is derived from the Russian verb рубить ('rubit'), meaning "to chop", from the practice of the Rus, described by Ahmad ibn Fadlan visiting the Volga Vikings in 922.[citation needed] An example of the related Viking weighing scale with weights was found on the Isle of Gigha.[2] Hacksilver may be derived from silver tableware, Roman or Byzantine, church plate and silver objects such as reliquaries or book-covers, and jewellery from a range of areas. Hoards may typically include a mixture of hacksilver, coins, ingots and complete small pieces of jewellery.

Hoards of hacksilver are also well known in pre and post-coinage antiquity, in European and Near Eastern contexts. The Cisjordan Corpus (c.1200-586 BC) is the largest identified concentration of pre-coinage hacksilver hoards, and provides key evidence for the Phoenician and wider Near Eastern roots of the development and proliferation of the earliest silver coinages in the Greek world and western tradition. 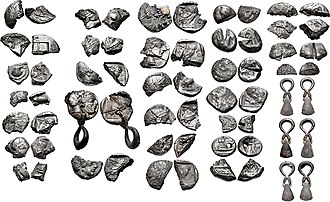 Eastern hacksilve from the Achaemenid Levant, including jewellery and Greek coins, 425-420 BC. These formed a part of Achaemenid coinage.

The widespread adoption of Greek silver coinages by c. 480 BC appears to have developed first out of cooperative relations between Greeks and Phoenicians, then partly as a competitive, culturally consolidating response to earlier Phoenician expansion and domination of silver trade, which had been conducted with hacksilver. Within the Cisjordan Corpus, a concentration of hacksilver hoards occurs in a part of southern Phoenicia that was recorded in antiquity as a territory of the Shardana tribes of Sea Peoples associated with Sardinia. Thompson, in her analyses of the hacksilver pieces, relates this textual evidence to lead isotope ratios that have ore signatures matching Sardinian ores. This is the first recognized material evidence linking the two regions in this critical period.[3] The same hacksilver hoards have provided the first recognized provenance-evidence for far-reaching contact between Europe and Asia related to the prehistoric trafficking of metals.[4][5]

Retrieved from "http://en.turkcewiki.org/w/index.php?title=Hacksilver&oldid=951086893"
This website is a mirror of Wikipedia, and is not affiliated with the Wikimedia Foundation.
Categories:
Hidden categories: