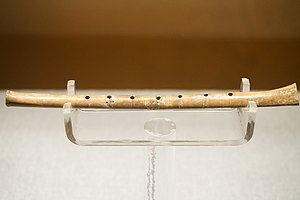 One of the gudi flutes discovered at Jiahu, on display at the Henan Museum

The Jiahu gǔdí (Chinese: 贾湖骨笛) is the oldest known musical instrument from China, dating back to around 6000 BC. Gudi literally means "bone flute".

These bone flutes were excavated in 1986 from an early Neolithic tomb in Jiahu, Wuyan County, Henan Province, in Central China. They have been dated to 6000 BC.

These bone flutes have average dimensions of approximately 20 cm × 1.1 cm (7.9 in × 0.4 in), and are made from the wings of the red-crowned crane. They are open-ended and vary in the number of their finger holes, from one to eight; the 24 holed version has 23 holes in front and one thumb hole in back. Jiahu bone whistles are much shorter than the flutes, with lengths of 5.7 to 10.5 cm (2 to 4 in), and having only a couple of holes. The number of holes and the spacing between the holes determined the musical range and scale or mode in which the flute was intended to function. Lee and Shen believed that the Chinese understood the "resonance of an air column" (see open tube and closed tube) and were able to create an instrument that contained their "complete interval preference of Chinese music". Blowing across the open end of an end-blown bone flute to produce a musical sound, is accomplished in the same way, and produces a similar effect, as blowing across the open top of a bottle. The eight-holed flute can play "all harmonic intervals and two registers." These harmonic intervals are said to be a "function of culture" and were of a larger set compared to that now familiar in the West. Bone flutes were apparently also played as part of sacrificial rites, and employed in bird hunting. Gudi are not very common now, but there are some musicians today who play them.

Retrieved from "http://en.turkcewiki.org/w/index.php?title=Gudi_(instrument)&oldid=956648339"
This website is a mirror of Wikipedia, and is not affiliated with the Wikimedia Foundation.
Categories:
Hidden categories: