The Greater Sydney Rams team in the NRC took took its identity from the Rams side that was founded in 2007. Australia's national competition was discontinued following the first season in 2007 but, after an absence of six years, the ARC was relaunched as the NRC in 2014.[1]

The revived Rams team for 2014 was backed by a syndicate of private investors in partnership with four Sydney rugby clubs; Parramatta, Penrith, Southern Districts and West Harbour.[2] The Eastwood club was initially included in the partnership but withdrew prior to the 2014 season.[3]

In 2017 the Rams were taken over by the Eastwood Rugby Union Club,[4] for what was to be their last season in the competition. A restructure for the 2018 season removed the Rams from the NRC, leaving only two sides from New South Wales in the competition; the Rays and the Eagles.[5]

The inspiration for the name Rams derived from the pioneering past of Western Sydney; and as recognition of the settlers that started the Australian sheep and wool industries in Parramatta.[6] The original orange and blue colours of the Rams were unveiled at the ARC team's launch in March 2007.[7] White was added to the collar of the jersey and base of the sleeves in 2014, and a predominantly white and blue kit with orange highlights was introduced when Eastwood took ownership of the team for the 2017 season.[8]

In 2007, an attempt was made to form a third tier of rugby in Australia, similar to New Zealand's ITM Cup and South Africa's Currie Cup. The new competition, called the Australian Rugby Championship, included eight teams. Three of those teams were based in New South Wales, including a Western Sydney team based at Parramatta.[9]

The clubs aligned with the Western Sydney Rams in 2007 were Eastwood, West Harbour, Parramatta and Penrith. All competed in the Tooheys New Cup and Shute Shield club competitions. The Rams' local rivals in the ARC were the Sydney Fleet and the Central Coast Rays. The three ARC teams from New South Wales were aligned with existing clubs and regions.

Brian Melrose was the head coach of the Rams in 2007.[10] Melrose had coaching roles with Manly and the Australian Sevens team and was previously an assistant coach to the Waratahs. He played for Parramatta, West Harbour and Eastwood before taking up coaching.[10]

The Western Sydney Rams played at Parramatta Stadium, which then had an all-seater capacity of 20,000.[11] The Rams were the minor premiers of the 2007 ARC season. The team was knocked out of the 2007 finals by the Melbourne Rebels at the semi-final stage. 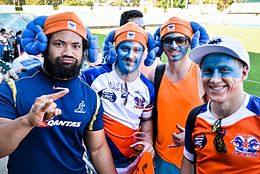 The National Rugby Championship was announced in December 2013 to commence in 2014 with expressions of interest open to any interested parties with accepted bids to be announced early 2014.

In March 2014 it was announced that the Rams would be revived as the Greater Sydney Rams to compete in the new National Rugby Championship,[13][14] and the team's original colours from the ARC would be maintained.[15]

The new Rams team, representing Greater Sydney, was formed by Greater Sydney Rams Pty Ltd – a syndicate of private investors in partnership with (initially) five Shute Shield clubs: Eastwood, Parramatta, Penrith, Southern Districts, and West Harbour.[2][16] In late June 2014, Eastwood withdrew financial backing from the Rams, and ended their formal association with the team.[17] The Rams' shareholdings were split, with three quarters being held by the syndicate of investors and the remainder held by the clubs (5% being kept aside for Eastwood should they wish to become a partner).[2]

The Rams appointed Brian Melrose as head coach for the 2014 season, renewing their association with the coach that took the Western Sydney Rams to the minor premiership in 2007.[19] For the first NRC match of 2014 the Rams named 21-year-old Jed Holloway, from the Southern Districts club, as captain of the team.[20] In 2015, former Wallaby assistant coach Jim Williams was appointed Rams coach.

The franchise reverted to its original name of Western Sydney Rams for the 2016 NRC season.[21] Consideration was given to the Southern Districts Rugby Club switching to the newly renamed Sydney Rays, but the club decided to remain a shareholder of the Rams.[22] Former Australian assistant coach John Muggleton was named as the Rams' new head coach for the 2016 season, with Jeremy Paul and Joel Wilson appointed as assistant coaches.[22]

The team played their home matches out of Concord Oval but only won two matches for the year, finishing the regular season in sixth place and did not make the semifinal stage of the competition.

The Rams franchise underwent a restructure in 2017, reverting to the Greater Sydney Rams name again when Eastwood Rugby Club took over control of the licence.[4] The team's home ground was moved to T G Millner Field.

Before the start of the 2018 season, an announcement from NSW Rugby on 6 June 2018 stated that only two teams from New South Wales would be included in the NRC for that year.[5][23] Reverting to one team each from the city and country meant that the Rams were removed from the competition.[5]

In 2015, the Rams consortium clubs of Parramatta and Southern Districts also hosted home matches.[25] In 2016, the Rams played out of Concord Oval, which hosted eight matches during the 1987 Rugby World Cup, including a semifinal. The Rams played all their home games for 2017 at T G Millner Field, the home ground of Eastwood Rugby Club in the Shute Shield competition.

Retrieved from "http://en.turkcewiki.org/w/index.php?title=Greater_Sydney_Rams&oldid=924373461"
This website is a mirror of Wikipedia, and is not affiliated with the Wikimedia Foundation.
Categories:
Hidden categories: