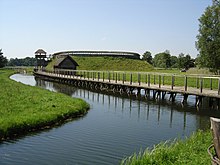 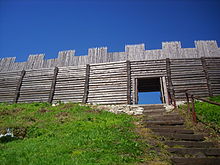 Section of reconstructed fortifications at Birów near Ogrodzieniec, Poland 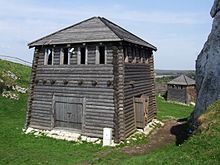 Part of reconstructed fortifications at Birów 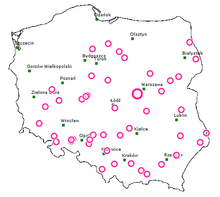 Model of Bródno gord in National Museum of Archaeology in Warsaw

A gord is a medieval Slavic fortified wooden settlement, sometimes known as a burgwall after the German term for such sites. Gords were built during the late Bronze and early Iron Ages by the Lusatian culture (c. 1300–500 BCE), and up to the 7th–8th centuries CE and beyond by other cultures, in what is now Poland, the Czech Republic, Hungary, Slovakia, eastern Germany, Romania, Moldova, Belarus, Serbia, Croatia, Bosnia and western Ukraine. These settlements were usually founded on strategic sites such as hills, riverbanks, lake islands, or peninsulas.

A typical gord was a group of wooden houses built either in rows or in circles, surrounded by one or more rings of walls made of earth and wood, a palisade, and/or moats. Some gords were ring-shaped, with a round, oval, or occasionally polygonal fence or wall surrounding a hollow. Others, built on a natural hill or a man-made mound, were cone-shaped. Those with a natural defense on one side, such as a river or lake, were usually horseshoe-shaped. Most gords were built in densely populated areas on sites that offered particular natural advantages.

As Slavic tribes united to form states, gords were also built for defensive purposes in less-populated border areas. Gords in which rulers resided or that lay on trade routes quickly expanded. Near the gord, or below it in elevation, there formed small communities of servants, merchants, artisans, and others who served the higher-ranked inhabitants of the gord. Each such community was known as a suburbium (Polish: podgrodzie). Its residents could shelter within the walls of the gord in the event of danger. Eventually the suburbium acquired its own fence or wall. In the High Middle Ages, the gord usually evolved into a castle or citadel (kremlin) and the suburbium into a town.

Some gords did not stand the test of time and were abandoned or destroyed, gradually turning into more or less discernible mounds or rings of earth (Russian gorodische, Polish grodzisko, Ukrainian horodyshche, Slovak hradisko, Czech hradiště, and Serbian gradiška/градишка). Notable archeological sites include Biskupin, Poland; and Bilsk, Ukraine (see Gelonus).

The term ultimately descends from the reconstructed Proto-Indo-European (PIE) root ǵʰortós, enclosure. From this same root come the Germanic word elements *gard and *gart (as in Stuttgart), and likely also the names of Graz, Austria and Gartz, Germany. Cognate to these are English words such as yard, garth, girdle, and court.[1][2] Also cognate but less closely related are Latin hortus, a garden, and its English descendants horticulture and orchard. In the Hungarian language, kert, the word for a garden, literally means encircled. Because Hungarian is a Uralic rather than an Indo-European language, this is likely a loanword.

Further afield, in ancient Iran, a fortified wooden settlement was called a gerd, or certa, which also means garden (as in the suffix -certa in the names of various ancient Iranian cities; e.g., Hunoracerta). The Persian word evolved into jerd under later Arab influence. Burugerd or Borujerd is a city in the west of Iran. The Indian suffix -garh, meaning a fort in Hindi, Sanskrit, and other Indo-Iranian languages, appears in many Indian place names.[3] Given that both Slavic and Indo-Iranian are sub-branches of Indo-European and that there are numerous similarities between Russian and Sanskrit vocabulary, it is plausible that garh and gorod are related. However, this is strongly contradicted by the phoneme /g/ in Indo-Iranian, which cannot be a reflex of the Indo-European palatovelar /*ǵ/.[4]

The Proto-Slavic word *gordъ later differentiated into grad (Cyrillic: град) and gorod (Cyrillic: город), etc.[5][6][7] It is the root of various words in modern Slavic languages pertaining to fences and fenced-in areas (Belarusian гарадзіць, Ukrainian horodyty, Czech ohradit, Russian ogradit, Serbo-Croatian ograditi, and Polish ogradzać, grodzić, to fence off). It also has evolved into words for a garden:

Additionally, it has furnished numerous modern Slavic words for a city or town:

The names of many Central and Eastern European cities harken back to their pasts as gords. Some of them are in countries which once were but no longer are mainly inhabited by Slavic-speaking peoples. Examples include:

The words in Polish and Slovak for suburbium, podgrodzie and podhradie correspondingly, literally mean a settlement beneath a gord: the gród/hrad' was frequently built at the top of a hill, and the podgrodzie/podhradie at its foot. (The Slavic prefix pod-, meaning "under/below" and descending from the Proto-Indo-European root pṓds, meaning foot, being equivalent to Latin sub-). The word survives in the names of several villages (Podgrodzie, Subcarpathian Voivodeship) and town districts (e.g., that of Olsztyn), as well as in the names of the German municipalities Puttgarden, Wagria and Putgarten, Rügen.

Retrieved from "http://en.turkcewiki.org/w/index.php?title=Gord_(archaeology)&oldid=959524383"
This website is a mirror of Wikipedia, and is not affiliated with the Wikimedia Foundation.
Categories:
Hidden categories: