(Redirected from Goose pimples)
Jump to navigation Jump to search
For other uses, see Goosebumps (disambiguation).

Goose bumps are the bumps on a person's skin at the base of body hairs which may involuntarily develop when a person is tickled, cold or experiencing strong emotions such as fear, euphoria or sexual arousal.[1]

The formation of goose bumps in humans under stress is considered to be a vestigial reflex.[2] Its function in other apes is to raise the body's hair, and would have made human ancestors appear larger to scare off predators or to increase the amount of air trapped in the fur to make it more insulating. The reflex of producing goose bumps is known as piloerection or the pilomotor reflex, or, more traditionally,[3] horripilation. It occurs in many mammals; a prominent example is porcupines, which raise their quills when threatened, or sea otters when they encounter sharks or other predators. 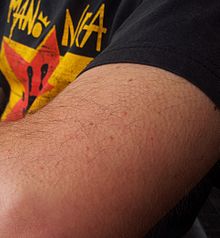 The phrase "goose bumps" derives from the phenomenon's association with goose skin. Goose feathers grow from spores in the epidermis which resemble human hair follicles. When a goose's feathers are plucked, its skin has protrusions where the feathers were, and these bumps are what the human phenomenon resembles.

It is not clear why the particular fowl, goose, was chosen in English, as most other birds share this same anatomical feature. Some authors have applied "goosebumps" to the symptoms of sexually transmitted diseases.[4] "Bitten by a Winchester goose" was a common euphemism for having contracted syphilis[5] in the 16th century.[6] "Winchester geese" was the nickname for the prostitutes of Southern London,[7] licensed by the Bishop of Winchester in the area around his London palace.

In other languages, the "goose" may be replaced by other kinds of poultry. For instance, "hen" is used in Spanish (piel de gallina), Portuguese (pele de galinha), Romanian (piele de găină), French (chair de poule), Catalan (pell de gallina), Slovene (kurja polt) and in Central Italy (ciccia di gallina).[8] "Chicken" is used in Dutch (kippenvel), Chinese (雞皮疙瘩, lit. "lumps on chicken skin"), Finnish (kananliha), Estonian (kananahk), Afrikaans (hoendervleis) and Korean (닭살, daksal). In Hindi/Urdu it is called rongtey khade ho jaana. The equivalent Japanese term, 鳥肌, torihada, translates literally as "bird skin". In Arabic it is called kash'arirah (قشعريرة), while in Hebrew it is called "duck skin" (עור ברווז). In Vietnamese, it is called da gà, which can be translated as "chicken skin", or gai ốc, which can be translated as "snail node".

All of the birds listed above are commonly consumed in the country of origin, so it may well be assumed that the term "goose pimples" (also "goose skin" and "goose flesh", c.1785 and 1810) and all other related terms in other languages came into being merely due to the visual similarity of the bird's plucked skin and the human skin phenomenon, used to describe the sensation in a way that is readily familiar.[9]

The same effect is manifested in the root word horror in English, which is derived from Latin horrere, which means "to bristle", and "be horrified", because of the accompanying hair reaction.

Goosebumps in a kitten, due to a fear of heights

Goose bumps are created when tiny muscles at the base of each hair, known as arrector pili muscles, contract and pull the hair erect. The reflex is started by the sympathetic nervous system, which is responsible for many fight-or-flight responses. The muscle cells connected to the hair follicle have been visualized by actin immunofluorescence.[10]

As a response to cold[edit]

In animals covered with fur or hair, the erect hairs trap air to create a layer of insulation. Goose bumps can also be a response to anger or fear: the erect hairs make the animal appear larger, in order to intimidate enemies. This can be observed in the intimidation displays of chimpanzees,[11] some New World monkeys like the cotton-top tamarin,[12] in stressed mice[13] and rats, and in frightened cats.

In humans, goose bumps can even extend to piloerection as a reaction to hearing nails scratch on a chalkboard, listening to awe-inspiring music,[14] or feeling or remembering strong and positive emotions (e.g., after winning a sports event), or while watching a horror film.[15]

Some can deliberately evoke goose bumps in themselves without any external trigger. Such people tend to have the ability to increase their heart rate and describe the event as a chill from the base of their skull down the body, that causes the increase in heart rate and concurrent goosebumps on the skin especially the forearms which varies in duration. Further research is needed to discover more on such people.[16]

Goose bumps are accompanied by a specific physiological response pattern that is thought to indicate the emotional state of being moved.[17]

In humans, goose bumps are strongest on the forearms,[citation needed] but also occur on the legs, neck, and other areas of the skin that have hair. In some people, they even occur in the face or on the head.

Piloerection is also a classic symptom of some diseases, such as temporal lobe epilepsy, some brain tumors, and autonomic hyperreflexia. Goose bumps can also be caused by withdrawal from opiates such as heroin. A skin condition that mimics goose bumps in appearance is keratosis pilaris.

Goose bumps can be experienced in the presence of flash-cold temperatures, for example being in a cold environment, and the skin being able to re-balance its surface temperature quickly. The stimulus of cold surroundings causes the tiny muscles attached to each hair follicle to contract. This contraction causes the hair strands to stand straight, the purpose of which is to aid in quicker drying via evaporation of water clinging to the hair which is moved upward and away from the skin.[citation needed]

People often say they feel their "hair standing on end" when they are frightened or in awe. In an extremely stressful situation, the body can employ the "fight or flight" response. As the body prepares itself for either fighting or running, the sympathetic nervous system floods the blood with adrenaline (epinephrine), a hormone that speeds up heart rate, metabolism, and body temperature in the presence of extreme stress. Then the sympathetic nervous system also causes the piloerection reflex, which makes the muscles attached to the base of each hair follicle contract and force the hair up.

Canadian researchers have suggested that when humans are moved by music their brains behave as if reacting to delicious food, psychoactive drugs, or money.[18] The pleasure experience is driven by the chemical dopamine, which produces physical effects known as "chills" that cause changes in heart rate, breathing, temperature and the skin's electrical conductance. The responses correlate with the degree to which people rate the "pleasurability" of music.[19] Dopamine release is greatest when listeners had a strong emotional response to music. "If music-induced emotional states can lead to dopamine release, as our findings indicate, it may begin to explain why musical experiences are so valued,” wrote the scientists.[18]

Medications and herbal supplements that affect body temperature and blood flow may cause piloerection. For example, one of the common reported side effects of the intake of yohimbine is piloerection.[20][21]

An unknown proportion of people may consciously initiate the sensation and physiological signs of piloerection. The phenomenon is discovered spontaneously, appearing to be innate, and is not known to be possible to learn or acquire. Those with the ability frequently are unaware that it is not possible to everyone. The ability appears to correlate with personality traits associated with openness to experience.[26]

Retrieved from "http://en.turkcewiki.org/w/index.php?title=Goose_bumps&oldid=960981597"
This website is a mirror of Wikipedia, and is not affiliated with the Wikimedia Foundation.
Categories:
Hidden categories: