Jump to navigation Jump to search
This article is about the sound in spoken language. For the letter, see Glottal stop (letter). For consonants followed by superscript ˀ, see Glottalization.
Sound made by stopping airflow in the glottis

The glottal stop or glottal plosive is a type of consonantal sound used in many spoken languages, produced by obstructing airflow in the vocal tract or, more precisely, the glottis. The symbol in the International Phonetic Alphabet that represents this sound is ⟨ʔ⟩.

As a result of the obstruction of the airflow in the glottis, the glottal vibration either stops or becomes irregular with a low rate and sudden drop in intensity.[1]

Features of the glottal stop:[citation needed] 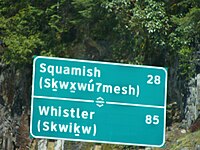 Road sign in British Columbia showing the use of 7 to represent /ʔ/ in Squamish.
See also: Glottal stop (letter)

In the traditional Romanization of many languages, such as Arabic, the glottal stop is transcribed with an apostrophe, ⟨ʼ⟩, which is the source of the IPA character ⟨ʔ⟩. In many Polynesian languages that use the Latin alphabet, however, the glottal stop is written with a reversed apostrophe, ⟨ʻ⟩ (called ‘okina in Hawaiian and Samoan), which is commonly used to transcribe the Arabic ayin as well (also ⟨ʽ⟩) and is the source of the IPA character for the voiced pharyngeal fricative ⟨ʕ⟩. In Malay the glottal stop is represented by the letter ⟨k⟩, in Võro and Maltese by ⟨q⟩.

Other scripts also have letters used for representing the glottal stop, such as the Hebrew letter aleph ⟨א⟩ and the Cyrillic letter palochka ⟨Ӏ⟩, used in several Caucasian languages. Modern Latin alphabets for various Indigenous Languages of the Caucasus use the letter heng ('Ꜧ ꜧ'). In Tundra Nenets, it is represented by the letters apostrophe ⟨ʼ⟩ and double apostrophe ⟨ˮ⟩. In Japanese, glottal stops occur at the end of interjections of surprise or anger and are represented by the character ⟨っ⟩.

In the graphic representation of most Philippine languages, the glottal stop has no consistent symbolization. In most cases, however, a word that begins with a vowel-letter (e.g. Tagalog aso, "dog") is always pronounced with an unrepresented glottal stop before that vowel (as in Modern German and Hausa). Some orthographies use a hyphen instead of the reverse apostrophe if the glottal stop occurs in the middle of the word (e.g. Tagalog pag-ibig, "love"; or Visayan gabi-i, "night"). If it occurs in the end of a word, the last vowel is written with a circumflex accent (known as the pakupyâ) if both a stress and a glottal stop occur in the final vowel (e.g. basâ, "wet") or a grave accent (known as the paiwà) if the glottal stop occurs at the final vowel, but the stress occurs at the penultimate syllable (e.g. batà, "child").[2][3][4]

Some Canadian indigenous languages, especially some of the Salishan languages, have adopted the phonetic symbol ʔ itself as part of their orthographies. In some of them, it occurs as a pair of uppercase and lowercase characters, Ɂ and ɂ.[5] The numeral 7 or question mark is sometimes substituted for ʔ and is preferred in some languages such as Squamish. SENĆOŦEN – which has unique alphabet – contrastly uses the comma ⟨,⟩ to represent the glottal stop, though it is optional.

In 2015, two women in the Northwest Territories challenged the territorial government over its refusal to permit them to use the ʔ character in their daughters' names: Sahaiʔa, a Chipewyan name, and Sakaeʔah, a Slavey name (the two names are actually cognates). The territory argued that territorial and federal identity documents were unable to accommodate the character. The women registered the names with hyphens instead of the ʔ, while continuing to challenge the policy.[6]

Use of the glottal stop is a distinct characteristic of the Southern Mainland Argyll dialects of Scottish Gaelic. In such a dialect, the standard Gaelic phrase Tha Gàidhlig agam ("I speak Gaelic"), would be rendered Tha Gàidhlig a'am.[citation needed]

Often a glottal stop happens at the beginning of vowel phonation after a silence.[1]

Although this segment is not a phoneme in English, it occurs phonetically in nearly all dialects of English, as an allophone of /t/ in the syllable coda. Speakers of Cockney, Scottish English and several other British dialects also pronounce an intervocalic /t/ between vowels as in city. In Received Pronunciation, a glottal stop is inserted before a tautosyllabic voiceless stop: stoʼp, thaʼt, knoʼck, waʼtch, also leaʼp, soaʼk, helʼp, pinʼch.[8][9]

In many languages that do not allow a sequence of vowels, such as Persian, the glottal stop may be used to break up such a hiatus. There are intricate interactions between falling tone and the glottal stop in the histories of such languages as Danish (see stød), Chinese and Thai.[citation needed]

In many languages, the unstressed intervocalic allophone of the glottal stop is a creaky-voiced glottal approximant. It is known to be contrastive in only one language, Gimi, in which it is the voiced equivalent of the stop.[citation needed]

The table below demonstrates how widely the sound of glottal stop is found among the world's spoken languages. It is not intended to be a complete list. Any of these languages may have varieties not represented in the table.

Retrieved from "http://en.turkcewiki.org/w/index.php?title=Glottal_stop&oldid=970636369"
This website is a mirror of Wikipedia, and is not affiliated with the Wikimedia Foundation.
Categories:
Hidden categories: