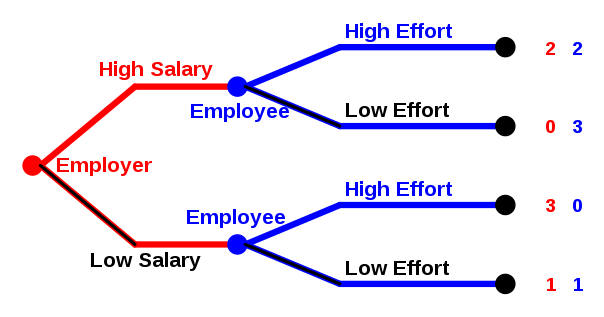 Idealistic representation of gift-exchange game in extensive form. This game has only one single Nash equilibrium. Actions predicted by this equilibrium are colored black.

The gift-exchange game is a game that has been introduced by Akerlof and Yellen as standard for modeling labor relations.[1] Two players are at least involved in such game – an employee and an employer. The employer has to decide first, whether to award a higher salary. Then, the decision of the employee about putting extra effort follows. Like trust games, gift-exchange games are used to study reciprocity for human subject research in social psychology and economics.[2] If the employer pays extra salary and the employee puts extra effort, then both players are better off than otherwise. The relationship between an investor and an investee has been investigated as the same type of a game.[3]

The extra effort in gift-exchange games is modeled to be a negative payoff if not compensated by salary. The IKEA effect of own extra work is not considered in the payoff structure of this game. Therefore, this model rather fits labor conditions, which are less meaningful for the employees.[4][5]

Like in trust games, game-theoretic solution for rational players predicts that employees’ effort will be minimum for one-shot and finitely repeated interactions. Therefore, there is no incentive for the employer to pay a higher salary.[1][2][6] If the employer pays a higher salary, it is irrational for the employee to put extra effort, since effort will reduce his or her payoff. It is also irrational for the employee to put extra effort while receiving a lower salary. Therefore, the minimum salary and the minimum effort is the equilibrium of this game.

A positive relationship between salary and effort has been observed in a large number of gift-exchange experiments.[8][9][10] This behavior obviously deviates from the equilibrium. In a game of one employer and one employee, an experiment on 84 undergraduate students from the University of Amsterdam showed a rate of only 23.8% of employee's minimal effort for high salary.[11] Another experiment with students from Tilburg University showed that only 33% of games ended up in the Nash equilibrium with minimal salary and minimal effort.[12] Data from another experiment on 123 students from University of Nottingham showed a rate of 69% for high salary being paid by employer in advance.[13][5]

Retrieved from "http://en.turkcewiki.org/w/index.php?title=Gift-exchange_game&oldid=958785391"
This website is a mirror of Wikipedia, and is not affiliated with the Wikimedia Foundation.
Categories:
Hidden categories: