Jump to navigation Jump to search
For other uses, see Public bank.

The German banking system is structured in three different pillars, totally separated from each other.[1] They typically differ in their legal form and the ownership.[2] Private banks, represented by banks like Deutsche Bank or Commerzbank as listed companies, and Hauck & Aufhäuser or Bankhaus Lampe as less known private companies, are part of the first tier. The second tier is composed of co-operative banks like the numerous Volksbanken and Raiffeisenbanken.[1] They are based on a member-structure where each member, independently from its capital share, has one vote.[3] The third tier consists of public banks, which are a legally defined arm of the banking industry in Germany. They are further divided into two main groups.

The German Savings Banks Finance Group (Sparkassen-Finanzgruppe) is the most numerous sub-sector with 431 savings banks using the Sparkasse brand,[4] 8 Landesbanken including the DekaBank using separate brands[5] and 10 real-estate financing banks using the LBS brand.[6] The Deutscher Sparkassen- und Giroverband (German Savings Banks and Clearing Association, DSGV) represents the interests of the Sparkassen-Finanzgruppe on a national and international level concerning law and the financial services industry. It also coordinates, promotes and harmonises the interests of Sparkassen.[7]

According to the OECD, the German public banking system had a 40% share of total banking assets in Germany.[8] This shows the significant role of this group of banks in Germany.

Public banks in Germany are financial institutions typically held directly or indirectly by public sector entities such as the federal government, the states, administrative districts or cities. Not all these companies are fully publicly owned. They can also be defined as public because they provide services in the public interest.[9]

The public banks are represented through the Bundesverband Öffentlicher Banken Deutschlands (VÖB, Association of German Public Sector Banks), one of the leading associations in the German banking industry. The association counts 34 ordinary members, but the Landesbanken, as part of the Sparkassen-Finanzgruppe described below, are also members of this association.[10]

The typical public bank acts as a business development bank (Förderbank, Aufbaubank or Investitionsbank) or as an institution for the financing of international projects, infrastructure and exports. The best known representatives of this group are the KfW-Group, the NRW.Bank in North Rhine-Westphalia, the LfA Förderbank Bayern in Bavaria and the L-Bank, Staatsbank für Baden-Württemberg in Baden-Wuerttemberg. 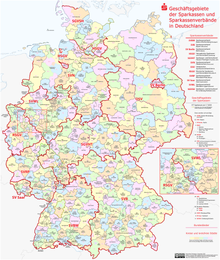 The first savings banks in Germany were founded at the beginning of the 18th century in its major trading cities. One of the first institutions with the business model of modern savings banks was the Ersparungscasse der Hamburgischen Allgemeinen Versorgungsanstalt in Hamburg in 1778. Founders were rich merchants, clerks and academics. They intended to develop solutions for people with low income to save small sums of money and to support business start-ups.[14] In 1801 the first savings bank with a municipal guarantor was founded in Göttingen to fight poverty.[15] Between 1850 and 1903 the idea of the municipal savings banks spread and the number of savings banks in Germany increased from 630 to 2834.[16] Fulfilling public interests is still one of the most significant characteristics of public banks in general and the savings banks in particular. Although public interest is very unspecific, objects of those companies are usually

The total assets of the Sparkassen amount to about €1 trillion. The 431 savings banks operate a network of over 15,600 branches and offices and employ over 250,000 people.[18] Savings banks are universal banks and provide the whole spectrum of banking services for private and commercial medium-sized customers.[4] 50 million customers maintain business activities with savings banks.[19] Although independent and regionally spread, the savings banks act as one unit under the brand Sparkasse with the famous logo and the well known red colour.

The size of savings banks differs widely depending on the economy in their region. While the biggest, Hamburger Sparkasse, had total assets of €37.7 billion and 5,500 employees in 2009, the smallest (Stadtsparkasse Bad Sachsa) had only €129.6 million in assets and 45 employees.[20]

The German Savings Banks Association (Deutscher Sparkassen- und Giroverband) was founded in 1924[21] as an umbrella organization to facilitate decision-making processes, coordinate strategy, and represent its members' political and regulatory interests at the national and international levels.[22] 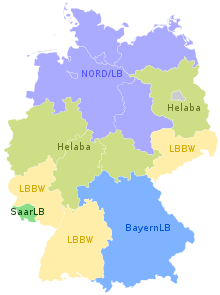 The Landesbanken are mostly owned by the regional savings banks through its regional association and the respective federal state.[5] After several mergers and acquisitions, there are seven Landesbanken-Groups left: BayernLB, Norddeutsche Landesbank (Nord/LB), HSH Nordbank, Landesbank Baden-Württemberg (LBBW), Landesbank Berlin (LBB), Landesbank Hessen-Thuringen - Girozentrale (Helaba), WestLB.[5] Bremer Landesbank Kreditanstalt Oldenburg - Girozentrale belongs with a share of 92.5% to the Nord/LB-Group. The rest is owned by the federal state of Bremen.[24] The Sachsen LB and the Landesbank Rheinland-Pfalz (LRP) since April 2008 are subsidiaries of the Landesbank Baden-Württemberg (LBBW).[25] Until 21.06.2010, the BayernLB was majority shareholder of the Landesbank Saar (SaarLB) with a share of 75.1%. Since June 2010, the Saarland has become shareholder with a stake of 35.2% and the BayernLB reduced its share to 49.9%. The remaining 14.9% are held by the Sparkassen through its regional confederation.[26]

The regional banks / clearing houses are the central banks of a savings bank association and act as the "main bank" of the states. They are also local banks, mortgage banks and general commercial banks. Their duties and powers are codified in the individual banking laws of the Länder (Landesbankengesetze). The specific tasks for the savings banks include the central clearing for cashless payments and liquidity funding for the regional savings banks. They also provide many services for the savings banks in the region in securities and cross-country businesses. In contrast to savings banks, they do "wholesale-banking" rather than retail-banking.[27] With combined total assets of €1.6 trillion as of December 2010, the seven Landesbanken-Groups employ some 44,000 people.[28]

DekaBank with its subsidiaries is the central asset manager of the German Savings Bank Finance Group. Based in Frankfurt and Berlin it provides asset management services for the Sparkassen and the Landesbanken and their customers.[29] With managed fund assets of about €155 billion, approximately five million customer deposits[30] and group locations in Luxembourg[31] and Switzerland,[32] the DekaBank Group is one of the largest asset managers in Germany. DekaBank's roots date back to 1918, when Deutsche Girozentrale (DGZ) was founded.[33] Deka as an investment company was founded in 1956 (17.08.1956) by DGZ with a share of 23% in 11 other regional Landesbanken.[34] Today's DekaBank was created in 1999 by a merger of DGZ and Deka.[35]

Until 8 June 2011, DekaBank was owned by the German Savings Banks and Giro Association Landesbanken which grouped the shares in the GLB GmbH & Co.OHG, which held the DekaBank shares.[36] On 7 April 2011, the Savings Banks bought the 50% stake from the landesbanken for €2.3 billion to become sole owner of the DekaBank.[37] The acquisition was closed on 8 June 2011 and DekaBank became fully, directly owned by the savings banks.[38]

The Landesbausparkassen are subsidiaries of the Sparkassen and its associations and are regionally organised focussing on real estate banking.[40] There are 10 Landesbausparkassen in Germany which employ around 8,900 people. Their combined balance sheet shows total assets of €52 billion as per December 2009.[18]

Retrieved from "http://en.turkcewiki.org/w/index.php?title=German_public_bank&oldid=932702836"
This website is a mirror of Wikipedia, and is not affiliated with the Wikimedia Foundation.
Categories:
Hidden categories: