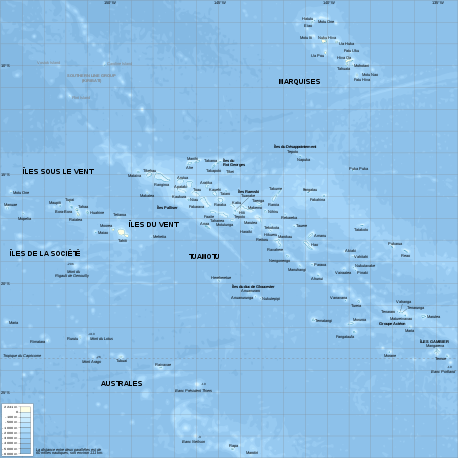 French Polynesia is located in Oceania. It is a group of six archipelagos in the South Pacific Ocean, about halfway between South America and Australia. Its area is about 4,167 km² (around 130 islands),[1] of which 3,827 km² is land and 340 km² is (inland) water. It has a coastline of 2,525 km but no land borders with other countries.

There are 118 islands in French Polynesia (and many more islets or motus around atolls). Four of the islands are volcanic and one island is coral. Makatea in French Polynesia is one of the three great phosphate rock islands in the Pacific Ocean – the others are Banaba (Ocean Island) in Kiribati and Nauru. The terrain consists of a mixture of rugged high islands and low islands with reefs.

It is made up of six archipelagos. The largest and most populated island is Tahiti, in the Society Islands.

The country has a tropical, but moderate climate. Occasional cyclonic storms occur in January. 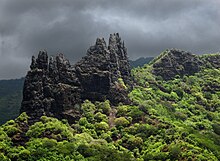 Hatiheu Bay on the island of Nuku Hiva
Land use

Retrieved from "http://en.turkcewiki.org/w/index.php?title=Geography_of_French_Polynesia&oldid=963900759"
This website is a mirror of Wikipedia, and is not affiliated with the Wikimedia Foundation.
Categories:
Hidden categories: