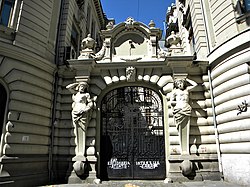 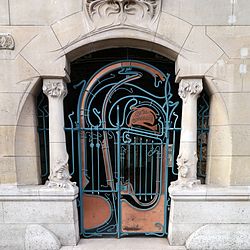 A gate or gateway is a point of entry to a space which is enclosed by walls. Gates may prevent or control the entry or exit of individuals, or they may be merely decorative. Other terms for gate include yett and port. The word is derived from old Norse "gat",[1] meaning road or path, and originally referred to the gap in the wall or fence, rather than the barrier which closed it. The moving part or parts of a gateway may be considered "doors", as they are fixed at one side whilst opening and closing like one.[2]

A gate may have a latch that can be raised and lowered to both open a gate or prevent it from swinging.[3] Locks are also used on gates to increase the security. Larger gates can be used for a whole building, such as a castle or fortified town. Actual doors can also be considered gates when they are used to block entry as prevalent within a gatehouse. Today, many gate doors are opened by an automated gate operator.

There are many different types of gates.

A swing gate is either a single gate or a double gate, also called a bi-parting swing gate, which open up in a swinging manner typically inward unless the property slopes downward.[4]

If you don't have enough space behind or in front of the gate for a swing gate, a sliding gate is another option. Sliding gates can also both be a single gate or double date, but the difference is the gate will slide to one side of the gate taking up less space.[4]

Similar to a sliding gate, a tandem gate also slides but is made up of two pieces that fold into each other and slide into place.

Cantilever gates slide but the key difference is that the gate is hung from a mounting post and is suspended in air; no part of the gate comes in contact with the ground with any type of wheel, which is where the name cantilever comes from.[5]

Retrieved from "http://en.turkcewiki.org/w/index.php?title=Gate&oldid=987304566"
This website is a mirror of Wikipedia, and is not affiliated with the Wikimedia Foundation.
Categories:
Hidden categories: