Jump to navigation Jump to search
Tower in Istanbul, Turkey

During the Byzantine period the Emperor Justinian had a tower erected in what was to become Galata. This tower was destroyed during the Fourth Crusade in 1204.

In 1267 a Genoese colony was established in the Galata part of Constantinople. It was surrounded by walls and the Galata Tower was first built at their highest point as the Christea Turris (Tower of Christ) in Romanesque style[2][3] in 1348 during an expansion of the colony. At the time the Galata Tower, at 219.5 ft (66.9 m), was the tallest building in the city.[4]

After the Turkish Conquest of Constantinople in 1453, the Genoese colony was abolished and the walls pulled down. The tower was allowed to survive and was turned into a prison. It was from its roof that, in 1638, Hezarfen Ahmed Çelebi supposedly strapped on wings and made the first intercontinental flight, landing in the Doğancılar Meydanı in Üsküdar on the Asian side of the city, a story of doubtful authenticity recounted by the Ottoman travel writer, Evliya Çelebi.

From 1717, the Ottomans used the tower to look out for fires (on the Old Istanbul side of the city the Beyazıt Tower served the same function). In 1794, during the reign of Sultan Selim III, the roof was reinforced in lead and wood, but the stairs were severely damaged by a fire. Another fire damaged the building in 1831, after which further restoration work took place.

In 1875, the tower's conical roof was destroyed during a storm.[5][6] It remained without this roof for the rest of the Ottoman period but, many years later, during restoration work between 1965 and 1967, the conical roof was reconstructed.[5][6] At the same time the tower's wooden interior was replaced with a concrete structure and it was opened to the public.[citation needed][7]

In 2020 the Tower was controversially restored then reopened as a museum. [8]

It is mainly popular for the 360-degree view of Istanbul visible from its observation deck. 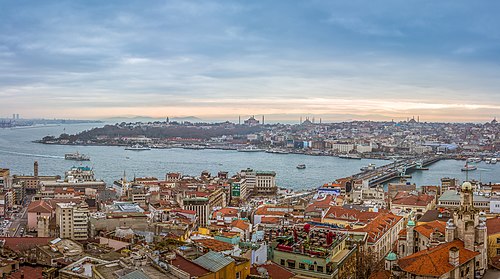 Retrieved from "http://en.turkcewiki.org/w/index.php?title=Galata_Tower&oldid=1124363396"
This website is a mirror of Wikipedia, and is not affiliated with the Wikimedia Foundation.
Categories:
Hidden categories: