Għar Dalam ("Cave of Dalam" (a fifteenth century family name), IPA: [aːr 'dalam])[A] is a 144 metre long phreatic tube and cave,[1] or cul-de-sac, located in the outskirts of Birżebbuġa, Malta. The cave contains the bone remains of animals that were stranded and subsequently became extinct in Malta at the end of the Last Glacial Maximum. It has lent its name to the Għar Dalam phase in Maltese prehistory, and is viewed as one of Malta's most important national monuments.[2] Pottery similar to that found in Stentinello was found at Għar Dalam, but lacking details such as stamp decorations.[3] 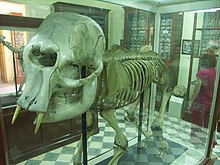 The cave was first investigated for its Neolithic remains in 1865, with excavations by Italian palaeontologist Arturo Issel.[1][5] An excavation was carried out in 1892 by John H. Cooke. The bulk of this material was stored in Malta, while a comparative collection was sent to the British Museum.[1] This material was studied by Forsyth Major in 1902, who isolated a new dwarf species of dwarf hippopotamus, Hippopotamus melitensis, based on these findings.

The cave was included on the Antiquities List of 1925,[6] but was not opened to the public until March 1933.[7] A museum was set up on site by the then-Curator of Natural History, Joseph Baldacchino. Within a year of his appointment as curator in 1935, Baldacchino published a booklet on Għar Dalam, highlighting the main excavations and investigations of the cave.[7] The museum was slowly upgraded, new specimens replacing the old, and a labelling system set in place.[7]

The showcases around the walls of the Għar Dalam museum house skeletal remains found in the cave.[5] These are organised by species and type. The showcases in the centre of the museum's room contain complete skeletons of modern examples of deer, elephant and other species.[5] These were not found in the cave, but imported as reference specimens for the use of scholars working on the fossil examples.[5]

It was used as an air-raid shelter during World War II. In 1980, the most important and irreplaceable relics—such as four tusks of dwarf elephants and the skull of a Neolithic child—were stolen from the museum.

The cave was investigated in 1987 under the direction of Emmanuel Anati, professor of paleontology at the University of Salento.[8] His team of Italian archaeologists from the Centro Camuno di Studi Preistorici discovered Palaeolithic cave art depicting human hands, anthropozoomorphic, and several animal designs from underneath the stalagmatic formations. Some depict elephants which have been extinct in the Maltese region since the Pleistocene. Most of these finds were destroyed due to recent[when?] vandalism.

The cave is some 144 metres (472 ft) deep but only the first 50 metres (160 ft) are accessible to visitors. The museum, which still exhibits a remarkable wealth of finds from animal bones to human artifacts, is the entrance to the whole area.

Għar Dalam Cave and Museum is operated by Heritage Malta. In 2019, a project was announced to improve the physical accessibility between Għar Dalam, Ta’ Kaċċatura, Borġ in-Nadur, and other sites which are in close proximity to one another.[9]

The cave consists of six layers.[10]

Retrieved from "http://en.turkcewiki.org/w/index.php?title=Għar_Dalam&oldid=961432879"
This website is a mirror of Wikipedia, and is not affiliated with the Wikimedia Foundation.
Categories:
Hidden categories: