A fuel tax (also known as a petrol, gasoline or gas tax, or as a fuel duty) is an excise tax imposed on the sale of fuel. In most countries the fuel tax is imposed on fuels which are intended for transportation. Fuels used to power agricultural vehicles, and/or home heating oil which is similar to diesel are taxed at a different, usually lower rate. The fuel tax receipts are often dedicated or hypothecated to transportation projects so that the fuel tax is considered by many a user fee. In other countries, the fuel tax is a source of general revenue. Sometimes, the fuel tax is used as an ecotax, to promote ecological sustainability. Fuel taxes are often considered[by whom?] regressive taxes.[1][failed verification]

Taxes on transportation fuels have been advocated as a way to reduce pollution and the possibility of global warming and conserve energy. Placing higher taxes on fossil fuels makes petrol just as expensive as other fuels such as natural gas, biodiesel or electric batteries, at a cost to the consumer in the form of inflation as transportation costs rise to transport goods all over the country.

Proponents advocate that automobiles should pay for the roads they use and argue that the user tax should not be applied to mass transit projects.

The Intergovernmental Panel on Climate Change, the International Energy Agency, the International Monetary Fund, and the World Bank have called on governments to increase gasoline tax rates in order to combat the social and environmental costs of gasoline consumption.[2]

A Nature study has shown that while gasoline taxes have increased in more countries than they have decreased in during the period 2003-2015, the global mean gasoline tax has decreased due to greater consumption in the low tax countries.[2] 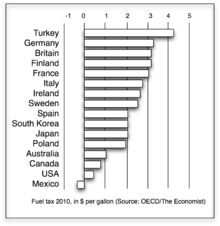 Chinese gasoline taxes have increased the most among the top twenty CO2-emitting countries over the period 2003-2015.[2]

In China, fuel tax has been a very contentious issue. Efforts by the State Council to institute a fuel tax in order to finance the National Trunk Highway System have run into strong opposition from the National People's Congress, largely out of concern for its impact on farmers. This has been one of the uncommon instances in which the legislature has asserted its authority.[5]

In India, the pricing of fuel varies by state, though central taxes still are part of the pump price of fuel. The Central and state government's taxes make up nearly half of petrol's pump price. The Central govt has different taxes, which amount to about 24–26% of the final cost. The states taxes vary, but on average end up making about 20–25% of the final cost. As a result, approximately 51% of the pump cost goes to the government in the form of different taxes.

Kerosene tax can be levied throughout the European Union on domestic flights and between Member States according to the 2003 Energy Taxation Directive.[9]

Petroleum products destined for utilisation by aircraft engaged in commercial flights outside of the customs territory of continental France are exempt from all customs duties and domestic taxes.[12] Recently, a rise of 23% in the diesel fuel tax has caused serious protests in major cities of France, leaving disruption and damage behind them.[13] Before the protests, the French government expected to increase both the petrol and diesel taxes until they both reached €0.78 per liter in 2022.[14]

In Poland half of the end-user price charged at a petrol station goes towards 3 distinct taxes:

Excise and fuel tax are prescribed by European Commission law, and therefore cannot be lower in any EU nation. However it is even higher than this EU minimum in Poland, a policy pursued by the former Minister of finance.[18]

Full tax rate is near 55% of motor fuel prices (ministry of industry and energy facts 2006).

Value Added Tax at 20% is also charged on the price of the fuel and on the duty. An additional vehicle excise duty, depending on a vehicle's theoretical CO2 production per kilometre, which is applied regardless of the amount of fuel actually consumed, is also levied.

Jet fuel used for international aviation attracts no duty, and no VAT.[21]

Fuel taxes in Canada can vary greatly between locales. On average, about one-third of the total price of gas at the pump is tax. Excise taxes on gasoline and diesel are collected both federal and provincial governments, as well as by some select municipalities (Montreal, Vancouver, and Victoria); with combined excise taxes varying from 16.2 ¢/L (73.6 ¢/imperial gal; 61.2 ¢/US gal) in the Yukon to 30.5 ¢/L ($1.386/imperial gal; $1.552/?US gal) in Vancouver. As well, the federal government and some provincial governments (Newfoundland and Labrador, Nova Scotia, and Quebec) collect sales tax (GST and PST) on top of the retail price and the excise taxes.[22]

The state and local tax figures includes fixed-per-gallon taxes as well as variable-rate taxes such as those levied as a percentage of the sales price. For state-level fuel taxes, nineteen states and the District of Columbia levy variable-rate taxes of some kind.[26] The other thirty one states do not tie the per-gallon tax rate to inflation, gas prices, or other factors, and the rate changes only by legislation. As of July 2016, twenty one states had gone ten years or more without an increase in their per-gallon gasoline tax rate.[27]

Because the fuel tax is universally styled as a "road use" tax, exempting off-road farming, marine, etc. use; states impose a tax on commercial operators traveling through their state as if the fuel used was bought there, wherever the fuel is purchased. While most commercial truck drivers have an agent to handle the required paperwork: what's reported is how much tax was collected in each state, how much should have been paid to each state, the net tax for each state and the combined net tax for all states to be paid by or refunded to the operator by their base jurisdiction where they file. The operator carries paperwork proving compliance. The member jurisdictions, the US states and the CA provinces, transmit the return information to each other and settle their net tax balances with each other either by a single transmittal through a clearinghouse set up by the IFTA and operated by Morgan Stanley, or by separate transfers with the other member jurisdictions.[28]

The fuel tax system in Australia is very similar to Canada in terms of featuring both a fixed and a variable tax, but varies in the case of exemptions including tax credits and certain excise free fuel.

Since October 2018, the fuel tax in Australia is A$0.412 per litre for petrol and ultra-low sulphur diesel (conventional diesel being taxed at A$0.412 per litre) and the excise for LPG is $0.282 per litre. Since 2000, there is also the GST (goods and services tax) on top of the fuel tax and inflation calculated twice a year called CPI (consumer price index) into the fuel tax since 2015.[29][circular reference][30]

Fuel taxes in New Zealand are considered an excise applied by the New Zealand Customs Service on shipments brought into the country. A breakdown of the fuel taxes is published by the Ministry of Economic Development. Excise as at 1 August 2012 totals 50.524 cents per litre ($1.89/imperial gal; $1.58/US gal) on petrol. In addition the national compulsory Accident Compensation Corporation motor vehicle account receives a contribution of 9.9 cents/litre (37.1¢/imperial gal; 30.9¢/US gal). The ethanol component of bio blended petrol currently attracts no excise duty. This was to be reviewed in 2012. Diesel is not taxed at the pump, but road users with vehicles over 3.5 tonne in Gross Laden Weight and any vehicles not powered wholly by any combination of petrol, LPG or CNG must pay the Road User Charge instead. The Goods and Services Tax (15%) is then applied to the combined total of the value of the commodity and the various taxes. On 25 July 2007 the Minister of Transport Annette King announced that from 1 July 2008 all fuel excise collected would be hypothecated to the National Land Transport Programme.[31]

Retrieved from "http://en.turkcewiki.org/w/index.php?title=Fuel_tax&oldid=963507208"
This website is a mirror of Wikipedia, and is not affiliated with the Wikimedia Foundation.
Categories:
Hidden categories: