The Free Zone or Liberated Territories is a term used by the Polisario Front government of the Sahrawi Arab Democratic Republic, a partially recognized de facto sovereign state in the western Maghreb, to describe the part of Western Sahara that lies to the east of a 2,200 kilometres (1,400 mi) border wall flanked by a minefield,[1] often referred as the Berm, and to the west and north of the borders with Algeria and Mauritania, respectively. It is controlled by the Sahrawi Arab Democratic Republic, as opposed to the area to the west of the Berm, which is controlled by Morocco as part of its Southern Provinces. Both states claim the entirety of Western Sahara as their territory.

The zone was consolidated as a Polisario-held zone in a 1991 cease-fire between the Polisario Front and Morocco, which had been agreed upon together as part of the Settlement Plan. Morocco controls the areas west of the Berm, including most of the territory's population. The cease-fire is overseen by the United Nations' MINURSO forces, charged with peacekeeping in the area and the organization of a referendum on independence.[2] 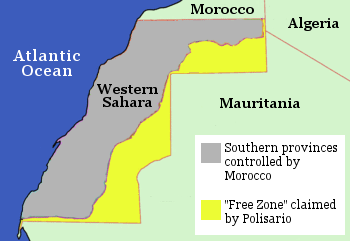 The Berm follows the line between the grey and yellow areas.

The status of Western Sahara is hotly disputed between Polisario and Morocco, and this includes the names used to refer to areas under the control of the different sides.

Morocco routinely refers to the Polisario-held region as a "buffer zone", or "buffer strip", and claims that Polisario forces are not allowed entry, and that both military activities and civilian construction in this area constitute violations of their cease-fire agreement.[3][4] The Polisario Front, on the other hand, claims this does not correspond to the provisions of the agreement regulating the territory's status, which Morocco signed in 1991, and regards the "buffer strip" as only a slim portion of the entire territory. This zone serves as a division-of-forces no-man's land. Areas outside this zone are open to activity by the side that controls them, provided they adhere to some restrictions on military movements. Similarly, Polisario call the areas a "liberated territory" or the "free zone", but this is not an official designation. The UN calls it simply "east of the Berm", and refers to territories under Moroccan control as "west of the Berm", thus not giving sanction to the claims of either party.

According to the Settlement Plan, the movement of Polisario fighters is restricted similarly to how Moroccan forces face restrictions on their side of the Berm. The MINURSO details details the following restrictions for the different zones:

Each of the five parts has specific restrictions as for the two parties' military activities:

Population and activities in the area[edit]

The population of the territory east of the Wall is estimated to be between 30,000[1] -40,000[5] inhabitants. By comparison, it is estimated that 500,000 inhabitants live west of the Wall, of which Moroccan settlers make up at least two thirds. Following the 1975 Green March, the Moroccan state has sponsored settlement schemes enticing thousands of Moroccans to move into the Moroccan-occupied part (80% of the territory).[6]

Access is difficult even for Sahrawis due to the harsh climate of the Sahara, the military conflict and the abundance of land mines.[7] The area is inhabited primarily by Sahrawi nomads, that maintain the traditional camel herding of their ancestors, between the zone, northern Mauritania and the refugee camps. There is also a small merchant population, who sell goods to travellers.

Major Sahrawi political events, such as Polisario congresses and opening sessions of the Sahrawi National Council (the SADR parliament in exile) are held in the zone (especially in Tifariti and Bir Lehlou), since it is considered socially, politically and symbolically important to conduct political affairs on Sahrawi land.

The Spanish actress Verónica Forqué at the Sahara Film Festival.

The Polisario troops (of the Sahrawi People's Liberation Army (SPLA) in the area are divided into seven "military regions", each controlled by a top commander reporting to the President of the Polisario proclaimed Sahrawi Arab Democratic Republic.[8] The total size of the Polisario's guerrilla army present in this area is unknown. Some sources claim between 3,000–6,000 men,[9] while others rise the number up to 12,000,[10] with additional combatants stationed in Algeria, Mauritania or having been demobilized due to the cease-fire. These forces are dug into permanent positions, such as gun emplacements, defensive trenches and underground military bases, as well as conducting mobile patrols of the territory.[11]

A concentration of forces for the commemoration of the Saharawi Republic's 30th anniversary[12] were however subject to reproach by the United Nations,[13] as it was considered an example of a cease-fire violation to bring such a large force concentration into the area.

Minurso reports that there are on average 2–4 such violations in the whole Western Sahara territory each month, between the two sides. In addition to this, there are several more violations related to local commanders on both sides refusing the inspection of their forces by Minurso personnel. As an example, the mission homepage quotes the month of June 2006, when there were "189 such FMO [freedom of movement]-violations, all related to the denial of UNMO [UN military officers] entry into the parties' strong-points and units."[3] Despite these minor breaches, there has to date been no serious hostile action from either side since 1991, and both sides of the Berm are considered calm by peacekeeping standards.

Annual demonstrations against the Moroccan Wall are staged in the region by Sahrawis and international activists from Spain, Italy and other mainly European countries. These actions are closely monitored by the UN.[14] 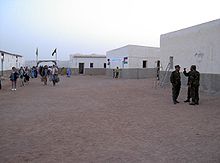 Tifariti, in the northeast of the zone, 2005

Retrieved from "http://en.turkcewiki.org/w/index.php?title=Free_Zone_(region)&oldid=966224612"
This website is a mirror of Wikipedia, and is not affiliated with the Wikimedia Foundation.
Categories:
Hidden categories: