Jump to navigation Jump to search
Branch of mathematics 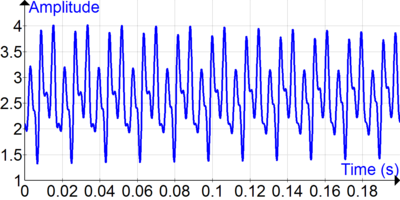 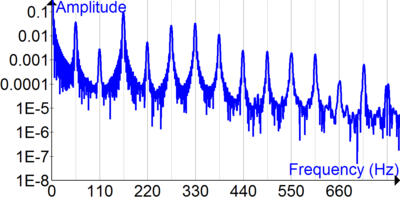 Today, the subject of Fourier analysis encompasses a vast spectrum of mathematics. In the sciences and engineering, the process of decomposing a function into oscillatory components is often called Fourier analysis, while the operation of rebuilding the function from these pieces is known as Fourier synthesis. For example, determining what component frequencies are present in a musical note would involve computing the Fourier transform of a sampled musical note. One could then re-synthesize the same sound by including the frequency components as revealed in the Fourier analysis. In mathematics, the term Fourier analysis often refers to the study of both operations.

The decomposition process itself is called a Fourier transformation. Its output, the Fourier transform, is often given a more specific name, which depends on the domain and other properties of the function being transformed. Moreover, the original concept of Fourier analysis has been extended over time to apply to more and more abstract and general situations, and the general field is often known as harmonic analysis. Each transform used for analysis (see list of Fourier-related transforms) has a corresponding inverse transform that can be used for synthesis.

This wide applicability stems from many useful properties of the transforms:

In forensics, laboratory infrared spectrophotometers use Fourier transform analysis for measuring the wavelengths of light at which a material will absorb in the infrared spectrum. The FT method is used to decode the measured signals and record the wavelength data. And by using a computer, these Fourier calculations are rapidly carried out, so that in a matter of seconds, a computer-operated FT-IR instrument can produce an infrared absorption pattern comparable to that of a prism instrument.[6]

Fourier transformation is also useful as a compact representation of a signal. For example, JPEG compression uses a variant of the Fourier transformation (discrete cosine transform) of small square pieces of a digital image. The Fourier components of each square are rounded to lower arithmetic precision, and weak components are eliminated entirely, so that the remaining components can be stored very compactly. In image reconstruction, each image square is reassembled from the preserved approximate Fourier-transformed components, which are then inverse-transformed to produce an approximation of the original image.

When processing signals, such as audio, radio waves, light waves, seismic waves, and even images, Fourier analysis can isolate narrowband components of a compound waveform, concentrating them for easier detection or removal. A large family of signal processing techniques consist of Fourier-transforming a signal, manipulating the Fourier-transformed data in a simple way, and reversing the transformation.[7] 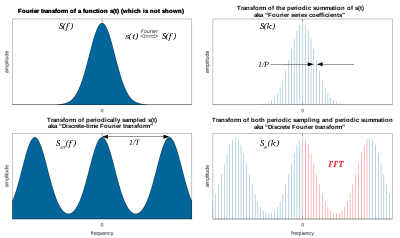 A Fourier transform and 3 variations caused by periodic sampling (at interval T) and/or periodic summation (at interval P) of the underlying time-domain function. The relative computational ease of the DFT sequence and the insight it gives into S( f ) make it a popular analysis tool.

Evaluating this quantity for all values of f produces the frequency-domain function. Then s(t) can be represented as a recombination of complex exponentials of all possible frequencies:

which is the inverse transform formula. The complex number, S( f ), conveys both amplitude and phase of frequency f.

See Fourier transform for much more information, including:

The Fourier transform of a periodic function, sP(t), with period P, becomes a Dirac comb function, modulated by a sequence of complex coefficients:

for all integer values of k, and where ∫P is the integral over any interval of length P.

The inverse transform, known as Fourier series, is a representation of sP(t) in terms of a summation of a potentially infinite number of harmonically related sinusoids or complex exponential functions, each with an amplitude and phase specified by one of the coefficients:

When sP(t), is expressed as a periodic summation of another function, s(t):

the coefficients are proportional to samples of S( f ) at discrete intervals of 1/P:

A sufficient condition for recovering s(t) (and therefore S( f )) from just these samples (i.e. from the Fourier series) is that the non-zero portion of s(t) be confined to a known interval of duration P, which is the frequency domain dual of the Nyquist–Shannon sampling theorem.

See Fourier series for more information, including the historical development.

The DTFT is the mathematical dual of the time-domain Fourier series. Thus, a convergent periodic summation in the frequency domain can be represented by a Fourier series, whose coefficients are samples of a related continuous time function:

which is known as the DTFT. Thus the DTFT of the s[n] sequence is also the Fourier transform of the modulated Dirac comb function.[B]

The Fourier series coefficients (and inverse transform), are defined by:

Parameter T corresponds to the sampling interval, and this Fourier series can now be recognized as a form of the Poisson summation formula. Thus we have the important result that when a discrete data sequence, s[n], is proportional to samples of an underlying continuous function, s(t), one can observe a periodic summation of the continuous Fourier transform, S( f ). That is a cornerstone in the foundation of digital signal processing. Furthermore, under certain idealized conditions one can theoretically recover S( f ) and s(t) exactly. A sufficient condition for perfect recovery is that the non-zero portion of S( f ) be confined to a known frequency interval of width 1/T. When that interval is [−1/2T, 1/2T], the applicable reconstruction formula is the Whittaker–Shannon interpolation formula.

Another reason to be interested in S1/T( f ) is that it often provides insight into the amount of aliasing caused by the sampling process.

Applications of the DTFT are not limited to sampled functions. See Discrete-time Fourier transform for more information on this and other topics, including:

Similar to a Fourier series, the DTFT of a periodic sequence, sN[n], with period N, becomes a Dirac comb function, modulated by a sequence of complex coefficients (see Discrete-time Fourier transform § Periodic data):

where ∑n is the sum over any sequence of length N.

The S[k] sequence is what is customarily known as the DFT of sN.  It is also N-periodic, so it is never necessary to compute more than N coefficients. The inverse transform is given by:

where ∑k is the sum over any sequence of length N.

When sN[n] is expressed as a periodic summation of another function:

the coefficients are proportional to samples of S1/T( f ) at discrete intervals of 1/P = 1/NT:

Conversely, when one wants to compute an arbitrary number (N) of discrete samples of one cycle of a continuous DTFT, S1/T( f ), it can be done by computing the relatively simple DFT of sN[n], as defined above. In most cases, N is chosen equal to the length of non-zero portion of s[n]. Increasing N, known as zero-padding or interpolation, results in more closely spaced samples of one cycle of S1/T( f ). Decreasing N, causes overlap (adding) in the time-domain (analogous to aliasing), which corresponds to decimation in the frequency domain. (see Discrete-time Fourier transform § Sampling the DTFT) In most cases of practical interest, the s[n] sequence represents a longer sequence that was truncated by the application of a finite-length window function or FIR filter array.

The DFT can be computed using a fast Fourier transform (FFT) algorithm, which makes it a practical and important transformation on computers.

See Discrete Fourier transform for much more information, including:

For periodic functions, both the Fourier transform and the DTFT comprise only a discrete set of frequency components (Fourier series), and the transforms diverge at those frequencies. One common practice (not discussed above) is to handle that divergence via Dirac delta and Dirac comb functions. But the same spectral information can be discerned from just one cycle of the periodic function, since all the other cycles are identical. Similarly, finite-duration functions can be represented as a Fourier series, with no actual loss of information except that the periodicity of the inverse transform is a mere artifact.

It is common in practice for the duration of s(•) to be limited to the period, P or N.  But these formulas do not require that condition.

From this, various relationships are apparent, for example:

More specific, Fourier analysis can be done on cosets,[9] even discrete cosets.

A primitive form of harmonic series dates back to ancient Babylonian mathematics, where they were used to compute ephemerides (tables of astronomical positions).[10][11][12][13]

In modern times, variants of the discrete Fourier transform were used by Alexis Clairaut in 1754 to compute an orbit,[14] which has been described as the first formula for the DFT,[15] and in 1759 by Joseph Louis Lagrange, in computing the coefficients of a trigonometric series for a vibrating string.[15] Technically, Clairaut's work was a cosine-only series (a form of discrete cosine transform), while Lagrange's work was a sine-only series (a form of discrete sine transform); a true cosine+sine DFT was used by Gauss in 1805 for trigonometric interpolation of asteroid orbits.[16] Euler and Lagrange both discretized the vibrating string problem, using what would today be called samples.[15]

An early modern development toward Fourier analysis was the 1770 paper Réflexions sur la résolution algébrique des équations by Lagrange, which in the method of Lagrange resolvents used a complex Fourier decomposition to study the solution of a cubic:[17] Lagrange transformed the roots x1, x2, x3 into the resolvents:

where ζ is a cubic root of unity, which is the DFT of order 3.

Historians are divided as to how much to credit Lagrange and others for the development of Fourier theory: Daniel Bernoulli and Leonhard Euler had introduced trigonometric representations of functions, and Lagrange had given the Fourier series solution to the wave equation, so Fourier's contribution was mainly the bold claim that an arbitrary function could be represented by a Fourier series.[15]

The subsequent development of the field is known as harmonic analysis, and is also an early instance of representation theory.

The first fast Fourier transform (FFT) algorithm for the DFT was discovered around 1805 by Carl Friedrich Gauss when interpolating measurements of the orbit of the asteroids Juno and Pallas, although that particular FFT algorithm is more often attributed to its modern rediscoverers Cooley and Tukey.[16][14]

When the function f is a function of time and represents a physical signal, the transform has a standard interpretation as the frequency spectrum of the signal. The magnitude of the resulting complex-valued function F at frequency ω represents the amplitude of a frequency component whose initial phase is given by the phase of F.

Fourier transforms are not limited to functions of time, and temporal frequencies. They can equally be applied to analyze spatial frequencies, and indeed for nearly any function domain. This justifies their use in such diverse branches as image processing, heat conduction, and automatic control.

Retrieved from "http://en.turkcewiki.org/w/index.php?title=Fourier_analysis&oldid=965233542"
This website is a mirror of Wikipedia, and is not affiliated with the Wikimedia Foundation.
Categories:
Hidden categories: