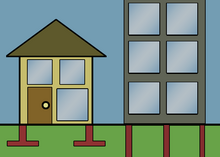 Foundations provide the structure's stability from the ground:

Requirements of a good foundation[edit]

The design and the construction of a well-performing foundation must possess some basic requirements that must not be ignored. They are: 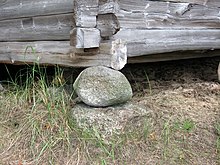 The simplest foundation, a padstone. The Ethnographic Open-Air Museum of Latvia

Buildings and structures have a long history of being built with wood in contact with the ground.[2][3] Post in ground construction may technically have no foundation. Timber pilings were used on soft or wet ground even below stone or masonry walls.[4] In marine construction and bridge building a crisscross of timbers or steel beams in concrete is called grillage.[5]

Perhaps the simplest foundation is the padstone, a single stone which both spreads the weight on the ground and raises the timber off the ground.[6] Staddle stones are a specific type of padstones.

Dry stone and stones laid in mortar to build foundations are common in many parts of the world. Dry laid stone foundations may have been painted with mortar after construction. Sometimes the top, visible course of stone is hewn, quarried stones.[7] Besides using mortar, stones can also be put in a gabion.[8] One disadvantage is that if using regular steel rebars, the gabion would last much less long than when using mortar (due to rusting). Using weathering steel rebars could reduce this disadvantage somewhat.

Rubble trench foundations are a shallow trench filled with rubble or stones. These foundations extend below the frost line and may have a drain pipe which helps groundwater drain away. They are suitable for soils with a capacity of more than 10 tonnes/m2 (2,000 pounds per square foot). 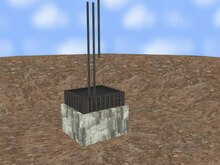 Shallow foundations, often called footings, are usually embedded about a metre or so into soil. One common type is the spread footing which consists of strips or pads of concrete (or other materials) which extend below the frost line and transfer the weight from walls and columns to the soil or bedrock.

Another common type of shallow foundation is the slab-on-grade foundation where the weight of the structure is transferred to the soil through a concrete slab placed at the surface. Slab-on-grade foundations can be reinforced mat slabs, which range from 25 cm to several meters thick, depending on the size of the building, or post-tensioned slabs, which are typically at least 20 cm for houses, and thicker for heavier structures.

A deep foundation is used to transfer the load of a structure down through the upper weak layer of topsoil to the stronger layer of subsoil below. There are different types of deep footings including impact driven piles, drilled shafts, caissons, helical piles, geo-piers and earth stabilized columns. The naming conventions for different types of footings vary between different engineers. Historically, piles were wood, later steel, reinforced concrete, and pre-tensioned concrete.

A monopile foundation is a type of deep foundation which uses a single, generally large-diameter, structural element embedded into the earth to support all the loads (weight, wind, etc.) of a large above-surface structure.

Many monopile foundations[9] have been utilized in recent years for economically constructing fixed-bottom offshore wind farms in shallow-water subsea locations.[10] For example, a single wind farm off the coast of England went online in 2008 with over 100 turbines, each mounted on a 4.74-meter-diameter monopile footing in ocean depths up to 16 metres of water.[11] 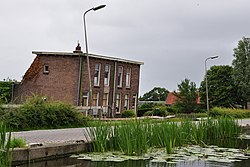 Inadequate foundations in muddy soils below sea level caused these houses in the Netherlands to subside.

Foundations are designed to have an adequate load capacity depending on the type of subsoil/rock supporting the foundation by a geotechnical engineer, and the footing itself may be designed structurally by a structural engineer. The primary design concerns are settlement and bearing capacity. When considering settlement, total settlement and differential settlement is normally considered. Differential settlement is when one part of a foundation settles more than another part. This can cause problems to the structure which the foundation is supporting. Expansive clay soils can also cause problems.

Retrieved from "http://en.turkcewiki.org/w/index.php?title=Foundation_(engineering)&oldid=944960400"
This website is a mirror of Wikipedia, and is not affiliated with the Wikimedia Foundation.
Categories:
Hidden categories: