In finance, a forward contract or simply a forward is a non-standardized contract between two parties to buy or sell an asset at a specified future time at a price agreed on at the time of conclusion of the contract, making it a type of derivative instrument.[1][2] The party agreeing to buy the underlying asset in the future assumes a long position, and the party agreeing to sell the asset in the future assumes a short position. The price agreed upon is called the delivery price, which is equal to the forward price at the time the contract is entered into.

The price of the underlying instrument, in whatever form, is paid before control of the instrument changes. This is one of the many forms of buy/sell orders where the time and date of trade is not the same as the value date where the securities themselves are exchanged. Forwards, like other derivative securities, can be used to hedge risk (typically currency or exchange rate risk), as a means of speculation, or to allow a party to take advantage of a quality of the underlying instrument which is time-sensitive.

A closely related contract is a futures contract; they differ in certain respects. Forward contracts are very similar to futures contracts, except they are not exchange-traded, or defined on standardized assets.[3] Forwards also typically have no interim partial settlements or "true-ups" in margin requirements like futures – such that the parties do not exchange additional property securing the party at gain and the entire unrealized gain or loss builds up while the contract is open. However, being traded over the counter (OTC), forward contracts specification can be customized and may include mark-to-market and daily margin calls. Hence, a forward contract arrangement might call for the loss party to pledge collateral or additional collateral to better secure the party at gain.[clarification needed] In other words, the terms of the forward contract will determine the collateral calls based upon certain "trigger" events relevant to a particular counterparty such as among other things, credit ratings, value of assets under management or redemptions over a specific time frame, e.g., quarterly, annually, etc.

) and the underlying price (

Since the final value (at maturity) of a forward position depends on the spot price which will then be prevailing, this contract can be viewed, from a purely financial point of view, as "a bet on the future spot price"[4]

How a forward contract works[edit]

The similar situation works among currency forwards, in which one party opens a forward contract to buy or sell a currency (e.g. a contract to buy Canadian dollars) to expire/settle at a future date, as they do not wish to be exposed to exchange rate/currency risk over a period of time. As the exchange rate between U.S. dollars and Canadian dollars fluctuates between the trade date and the earlier of the date at which the contract is closed or the expiration date, one party gains and the counterparty loses as one currency strengthens against the other. Sometimes, the buy forward is opened because the investor will actually need Canadian dollars at a future date such as to pay a debt owed that is denominated in Canadian dollars. Other times, the party opening a forward does so, not because they need Canadian dollars nor because they are hedging currency risk, but because they are speculating on the currency, expecting the exchange rate to move favorably to generate a gain on closing the contract.

In a currency forward, the notional amounts of currencies are specified (ex: a contract to buy $100 million Canadian dollars equivalent to, say US$75.2 million at the current rate—these two amounts are called the notional amount(s)). While the notional amount or reference amount may be a large number, the cost or margin requirement to command or open such a contract is considerably less than that amount, which refers to the leverage created, which is typical in derivative contracts.

Example of how forward prices should be agreed upon[edit]

Continuing on the example above, suppose now that the initial price of Andy's house is $100,000 and that Bob enters into a forward contract to buy the house one year from today. But since Andy knows that he can immediately sell for $100,000 and place the proceeds in the bank, he wants to be compensated for the delayed sale. Suppose that the risk free rate of return R (the bank rate) for one year is 4%. Then the money in the bank would grow to $104,000, risk free. So Andy would want at least $104,000 one year from now for the contract to be worthwhile for him – the opportunity cost will be covered.

For liquid assets ("tradeables"), spot–forward parity provides the link between the spot market and the forward market. It describes the relationship between the spot and forward price of the underlying asset in a forward contract. While the overall effect can be described as the cost of carry, this effect can be broken down into different components, specifically whether the asset:

For an asset that provides no income, the relationship between the current forward (

is the continuously compounded risk free rate of return, and T is the time to maturity. The intuition behind this result is that given you want to own the asset at time T, there should be no difference in a perfect capital market between buying the asset today and holding it and buying the forward contract and taking delivery. Thus, both approaches must cost the same in present value terms. For an arbitrage proof of why this is the case, see Rational pricing below.

For an asset that pays known income, the relationship becomes:

the present value of the discrete income at time

is the continuously compounded dividend yield over the life of the contract. The intuition is that when an asset pays income, there is a benefit to holding the asset rather than the forward because you get to receive this income. Hence the income (

For investment assets which are commodities, such as gold and silver, storage costs must also be considered. Storage costs can be treated as 'negative income', and like income can be discrete or continuous. Hence with storage costs, the relationship becomes:

the present value of the discrete storage cost at time

is the continuously compounded storage cost where it is proportional to the price of the commodity, and is hence a 'negative yield'. The intuition here is that because storage costs make the final price higher, we have to add them to the spot price.

Consumption assets are typically raw material commodities which are used as a source of energy or in a production process, for example crude oil or iron ore. Users of these consumption commodities may feel that there is a benefit from physically holding the asset in inventory as opposed to holding a forward on the asset. These benefits include the ability to "profit from" (hedge against) temporary shortages and the ability to keep a production process running,[1] and are referred to as the convenience yield. Thus, for consumption assets, the spot-forward relationship is:

The relationship between the spot and forward price of an asset reflects the net cost of holding (or carrying) that asset relative to holding the forward. Thus, all of the costs and benefits above can be summarised as the cost of carry, 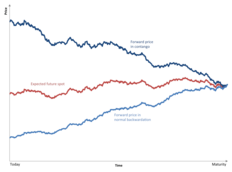 and the expected future spot price,

The economists John Maynard Keynes and John Hicks argued that in general, the natural hedgers of a commodity are those who wish to sell the commodity at a future point in time.[5][6] Thus, hedgers will collectively hold a net short position in the forward market. The other side of these contracts are held by speculators, who must therefore hold a net long position. Hedgers are interested in reducing risk, and thus will accept losing money on their forward contracts. Speculators on the other hand, are interested in making a profit, and will hence only enter the contracts if they expect to make money. Thus, if speculators are holding a net long position, it must be the case that the expected future spot price is greater than the forward price.

In other words, the expected payoff to the speculator at maturity is:

is the delivery price at maturity

Thus, if the speculators expect to profit,

when they enter the contract

This market situation, where

, is referred to as contango. Likewise, contango implies that futures prices for a certain maturity are falling over time.[7]

is the spot price of an asset at time

is the continuously compounded rate, then the forward price at a future time

To prove this, suppose not. Then we have two possible cases.

. Then an investor can execute the following trades at time

The initial cost of the trades at the initial time sum to zero.

the investor can reverse the trades that were executed at time

. Specifically, and mirroring the trades 1., 2. and 3. the investor

, which by hypothesis, is positive. This is an arbitrage profit. Consequently, and assuming that the non-arbitrage condition holds, we have a contradiction. This is called a cash and carry arbitrage because you "carry" the asset until maturity.

. Then an investor can do the reverse of what he has done above in case 1. This means selling one unit of the asset, investing this money into a bank account and entering a long forward contract costing 0.

Note: if you look at the convenience yield page, you will see that if there are finite assets/inventory, the reverse cash and carry arbitrage is not always possible. It would depend on the elasticity of demand for forward contracts and such like.

Extensions to the forward pricing formula[edit]

. The forward price is then given by the formula:

The cash flows can be in the form of dividends from the asset, or costs of maintaining the asset.

If these price relationships do not hold, there is an arbitrage opportunity for a riskless profit similar to that discussed above. One implication of this is that the presence of a forward market will force spot prices to reflect current expectations of future prices. As a result, the forward price for nonperishable commodities, securities or currency is no more a predictor of future price than the spot price is - the relationship between forward and spot prices is driven by interest rates. For perishable commodities, arbitrage does not have this

The above forward pricing formula can also be written as:

is the time t value of all cash flows over the life of the contract.

Theories of why a forward contract exists[edit]

Allaz and Vila (1993) suggest that there is also a strategic reason (in an imperfect competitive environment) for the existence of forward trading, that is, forward trading can be used even in a world without uncertainty. This is due to firms having Stackelberg incentives to anticipate their production through forward contracts.

Other types of trade contracts:

Retrieved from "http://en.turkcewiki.org/w/index.php?title=Forward_contract&oldid=956698190"
This website is a mirror of Wikipedia, and is not affiliated with the Wikimedia Foundation.
Categories:
Hidden categories: