Fort Atkinson is a city in Jefferson County, Wisconsin, United States. It is on the Rock River, a few miles upstream from Lake Koshkonong. The population was 12,368 at the 2010 census.

Fort Atkinson was named after General Henry Atkinson,[6] the commander of U.S. forces in the area during the Black Hawk War (1832) against a mixed band of Sauk, Meskwaki and Kickapoo peoples. The city developed at the site of Fort Koshkonong, which was used during that war. A replica of the original 1832 stockade has been built just outside town, although not at the original site. The fort was located to control the confluence of the Rock and Bark rivers.

The settlement grew rapidly in the mid-19th century, after the migration of pioneers from the east, especially New York State and the northern tier. They were among the many migrants carrying New England Yankee culture west across the northern tier of states.[7]

The history and natural history of Fort Atkinson and the surrounding area are presented at the Hoard Historical Museum and National Dairy Shrine Museum.[8] William Dempster Hoard founded the nationally distributed dairy farm magazine Hoard's Dairyman in Fort Atkinson in 1885. The museums include the Frank and Luella Hoard House, the Dwight and Almira Foster House, and the Knox Research Library and Archive. The Dairy Shrine portion of the complex portrays the past, present, and future of the dairy industry.

The oldest manmade features near Fort Atkinson are a cluster of prehistoric earthworks indigenous mounds just south of town. In a curious honor, settlers named them the General Atkinson Mound Group. The mounds are a remnant of the Woodland Period in present-day Wisconsin. They are effigy and geometric mounds, different from the platform mounds at nearby Aztalan State Park, built by peoples of the Mississippian culture, which reached its peak around 1300. They had settlements throughout the Mississippi Valley and its tributaries, extending from central Illinois northward to the Great Lakes and also to the Southeastern United States. Materials were traded within the culture from the Great Lakes to the Gulf of Mexico. A 125-foot (38 m) long panther intaglio appears on a mound west of town, the last remaining intaglio in the state.[9] 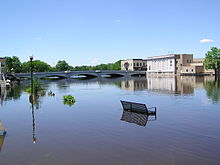 The city developed along the river, which provided the earliest transportation pathways for trade and travel. Occasionally the downtown area is flooded when the Rock River exceeds its banks. Just east of the city, the Bark River enters the Rock and can add considerable volume in certain seasons. The Rock River is a tributary of the Mississippi River, which it joins at Rock Island, Illinois. 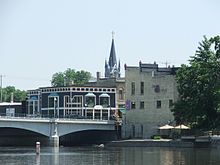 Fireside Dinner Theatre draws thousands of visitors each year.[15] Another tourist attraction is a reconstruction of the original fort.

The Dwight Foster Public Library, established in 1892, serves as Jefferson County's resource library.[19] It serves residents of Fort Atkinson and its surrounding communities.[20]

Primary automobile transportation is provided via Highway 12, Highway 26, Highway 89 and Highway 106. Highway 26 provides easy access to Interstate 94 (to the north in Johnson Creek), leading to downtown Milwaukee in about an hour; and to Interstate 90 (to the south in Janesville) leading to downtown Chicago in about 2.5 hours. Highway 12 provides access to the Madison metro area in about 45 minutes. Fort Atkinson was a stop on the C&NW Milwaukee to Madison line.

Retrieved from "http://en.turkcewiki.org/w/index.php?title=Fort_Atkinson,_Wisconsin&oldid=971728060"
This website is a mirror of Wikipedia, and is not affiliated with the Wikimedia Foundation.
Categories:
Hidden categories: