A forced abortion may occur when the perpetrator causes abortion by force, threat or coercion, or by taking advantage of woman's incapability to give her consent, or where she gives her consent under duress. This may also include the instances when the conduct was neither justified by medical or hospital treatment.[vague] Like forced sterilization, forced abortion may include a physical invasion of female reproductive organs.

Forced abortions associated with administration of the one-child policy have occurred in the People's Republic of China; they are a violation of Chinese law and are not official policy.[1] They result from government pressure on local officials who, in turn, employ strong-arm tactics on pregnant mothers.[2] On September 29, 1997, a bill was introduced in the United States Congress titled Forced Abortion Condemnation Act, that sought to "condemn those officials of the Chinese Communist Party, the government of the People's Republic of China and other persons who are involved in the enforcement of forced abortions by preventing such persons from entering or remaining in the United States".[3] In June 2012 Feng Jianmei was forcibly made to abort her 7 month old fetus after not paying a fine for breaking the one-child policy.[1] Her case was widely discussed on the internet in China to general revulsion after photos of the stillborn baby were posted online.[4] A fortnight after the forced abortion she continued to be harassed by local authorities in Shanxi Province.[5] On July 5, the European Parliament passed a resolution saying it "strongly condemns" both Feng's case specifically and forced abortions in general "especially in the context of the one-child policy."[6]

Part of the work of the activist "barefoot lawyer" Chen Guangcheng also concerned excesses of this nature.[7] By 2012, disagreement with forced abortion was being expressed by the public in China despite its reduced use, and repeal of the one-child policy was reportedly being discussed in some quarters for this and other reasons.[2][8] Even after the shift to a two-child policy in January 2016, the practice still occurs.[9] 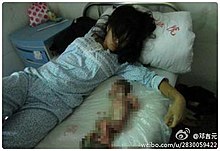 On June 21st, 2019, a UK court ordered a disabled woman to have an abortion against her will.[14] This was subsequently overturned on appeal.[15]

Coerced abortions qualify as forced abortions in the United States. Coercion includes withholding information from the patient, hiding or restricting access to abortion providers, or pressuring a woman to obtain an abortion.[16]

In 2016, Michigan Governor Rick Snyder enacted two bills with the intent to end forced abortions in the state. The first bill banned coercing a woman to have an abortion, and the second bill bans coerced abortions.[17] Eighteen states, including the fourteen that have criminalized coerced abortion, have mandated that abortion clinics and providers offer written and verbal notification advising women against receiving an abortion under coercion.[citation needed]

In a series of focus groups conducted around the United States by anti-trafficking activist Laura Lederer in 2014, over 25% of survivors of domestic sex trafficking who responded to the question reported that they had been forced to have an abortion.[18][19]

Retrieved from "http://en.turkcewiki.org/w/index.php?title=Forced_abortion&oldid=960459068"
This website is a mirror of Wikipedia, and is not affiliated with the Wikimedia Foundation.
Categories:
Hidden categories: