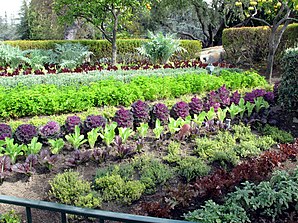 Foodscaping is a modern term for the practice of integrating edible plants into ornamental landscapes.[1] It is also referred to as edible landscaping and has been described as a crossbreed between landscaping and farming.[1] As an ideology, foodscaping highlights how edible plants are not only consumable and function, but can also be appreciated for their aesthetic qualities.[2] Foodscaping spaces are seen as multi-functional landscapes which are visually attractive and also provide edible returns.[2]

Differing from conventional vegetable gardening, where fruits and vegetables are typically grown in a separate, enclosed area, foodscaping incorporates edible plants as a major element of a pre-existing landscaping space.[1] This may involve adding edible plantations to an existing ornamental garden or entirely replacing the traditional, non-edible plants with food-yielding species.[3] The designs can incorporate various kinds of vegetables, fruit trees, berry bushes, edible flowers, and herbs, along with purely ornamental species.[4]

The design strategy of foodscaping has many benefits, including increasing food security, improving the growing of nutritious food and promoting sustainable living.[3] Edible landscaping practices may be implemented on public or domestic premises.[4] They can also be organised by individuals, community groups, businesses, or 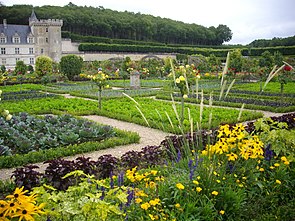 The Renaissance-style vegetable garden at Château de Villandry, France, displays rows of cabbage, carrots and leeks among colourful flowers to create a productive and ornamental landscape. 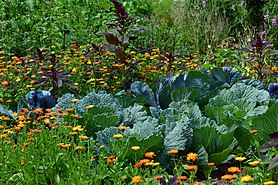 The term and ideology of 'foodscaping' have been around since the late 20th century, yet have only come into popular use during the last two decades in the 21st century.[4] Despite the relative modernity of the foodscaping trend, the strategy of integrating edible plants into landscaping spaces is not a new a concept. Similar practices date back to ancient and medieval gardening and agricultural techniques.[4] Foodscaping as a contemporary theory presents "a modern take on the way that past generations utilized land".[6] What distinguishes foodscaping from historical horticultural practices is the idea that edible plants can be just as aesthetically pleasing as traditional landscapes.[2] The practice appears to subvert the conventional historical perception of vegetable gardens as unattractive,[4] and instead views edible crops as design features in and of themselves.

Foodscaping is believed to have emerged from evolving public perceptions towards gardening and landscaping in the contemporary era.[4] However, edible landscaping is also believed to have grown in popularity in the 21st century due to various economic factors such as the financial crisis of 2007-2008 and the volatility of global food prices.[1]

There are many ancient gardening and edible landscaping practices that preceded foodscaping, including Ancient Persian and Roman gardens[4]. In Ancient Rome, Roman villa gardens were often both productive and ornamental, though agricultural production was the primary purpose of earlier villa gardens.[7] Archaeological research suggests that these Roman gardens took on various forms such as large vineyard landscapes or small herb gardens.[7] Kitchen gardens, vineyards and orchards played an important role in the lives of ancient Romans, whose diets were largely based on fruits and vegetables.[7]

During the Renaissance era, from around 1350 to 1600, fruit and vegetables were seen being part of a "peasant diet" in Europe.[4] Edible Renaissance gardens produced fruits and vegetables, some of the common kinds including figs, pears, apples, strawberries, cabbage, leeks, onions, and peas.[4]

English cottage gardens emerged in Elizabethan times.[8] They were believed to have been created by workers in the villages as a source of food.[9] Flowers were also planted within these gardens for ornamental purposes.[9] In 19th Century England, fruits and berries were often planted in suburban yards in attempt to model country estate gardens.[4]

As a result of rapid urbanization seen in recent decades, methods of food production have undergone significant change.[5] According to the United Nations, the Earth's urban population has "grown rapidly from 746 million in 1950 to 3.9 billion in 2014".[10] These accelerated trends in urbanization and population density during the late 20th and 21st century have placed stress on the availability of agricultural land and contributed to growing food insecurity.[5] As a result, there has been an increased desire to re-introduce food growth into urban environments, and consequentially an increase in the number of people adopting foodscaping strategies.[4] The ongoing 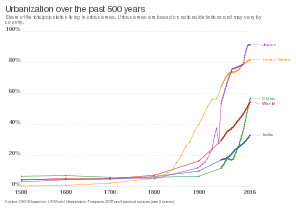 Urban population growth over the past 500 years.

rise in the human population, as well as international goals to reduce hunger and malnutrition, have further escalated the demand for food nutrients.[11]

Foodscaping is widely accepted as a way of increasing food security and accessibility.[12]  The instability of supermarket food prices can largely affect the availability of food.[5] As "self-sufficient food systems", edible landscapes are able to help to decrease a household's dependence on imported food.[5] Due to bearing edible produce, the practice allows greater accessibility and availability of food to the growers, even when faced with unpredictable circumstances such as the inability to procure food from commercial stores or periods of low financial income.[5]

Depending on the size and scale of the premise, there can be significant financial costs involved in the initial design and creation of an edible landscaping.[13] However, it is still generally accepted that foodscaping can help to lower food costs once the products of the edible plants have been harvested.[2]

In increasing the quantity of locally grown and consumed produce, foodscaping also promotes local food sustainability.[3] It has also been linked to addressing the demand for food within the context of global issues such as overpopulation, an unpredictable climate and waning energy resources.[14]

Large-scale agricultural premises typically require large amounts of energy, such as the use of diesel, propane and electricity in order to carry out farming operations.[15] The practice of edible landscaping often uses less energy and produces less waste than traditional methods of food production. This is because the food products cultivated from edible landscaping usually involve little processing, packaging or refrigeration.[5]

Foodscaping can also help reduce food miles through decreasing the need for long-distance transportation of food.[3] "A grocery store has on average 1,500 miles per product", says horticulturalist and foodscaping advocate Brie Arthur.[16] These ship and truck emissions create a harmful carbon footprint on the environment which could be reduced through the practice of home-growing instead of buying food.[16]

Foodscaping can further allow participants to help reduce the use of fossil fuel-based pesticides and fertilizers which negatively impact the environment.[5]

A common motivation behind foodscaping is the desire to grow, cook and consume foods of high nutritious content.[17] In a 2014 research survey conducted by the Australian Institute, 71% of surveyed foodscaping households in Australia were incorporating edibles into their gardens for the primary purpose of having access to fresh, healthier produce.[18] It is generally accepted that homegrown fruits and vegetables are fresher and more nutritious than supermarket produce, which is sometimes sold multiple days or even weeks after harvesting.[19]

In recent years, there has been increasing concern expressed towards the health effects of the chemical additives in commercially grown fruit and vegetables which are typically used to preserve food produce.[19] Foodscaping has been considered a way to reduce exposure to chemically modified produce.[20]

Edible landscaping allows participants to increase fresh food production into urban areas. In these areas, the most accessible kinds of food are typically processed kinds, which can lead to greater dietary intakes of sugar, sodium and fat.[5] Many academic studies have inferred strong links between urban gardening and healthy lifestyle choices.[21] The gardening practices involved in foodscaping are believed to increase participants' fruit and vegetable consumption and valuing of preparing nutritious meals.[21]

Depending on the scale of the edible landscape, foodscaping can require extra time and manual labour to maintain than a regular garden or landscape.[4] This is as the aim of foodscaping is to yield edible returns whilst also remaining aesthetically pleasing,[2] which may involve added watering, fertilization, pest control and pruning.[4] A lack of time and unsuitable conditions such as climate and insufficient shade can be significant deterrents for people wishing to create edible landscapes.[13] However, maintenance requirements can be reduced by choosing plant species that are suited to the geographic location, climate and conditions of the area to be foodscaped.[2]

During certain times of the year, regularly monitoring the ripeness of food produce is a requirement of successful foodscaping.[4] If fruits are not harvested at the correct time, they can rot and become visually unappealing within an edible landscape.[2] This may also attract undesired pests or vermins.[2] 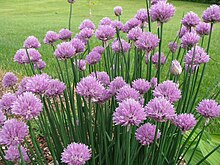 Flowering chives make a colourful addition to an edible landscape. 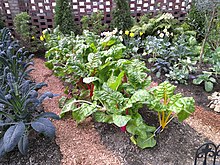 A row of Swiss chard at Phipps Conservatory, Pittsburgh, Pennsylvania. Swiss chard is often used in foodscaping for its vibrant colours.

Plants in foodscaping designs are typically chosen for their aesthetic and edible appeal.[17] Numerous vegetables have been celebrated for their colourful and decorative addition to foodscaping spaces.[3] Swiss chard, cabbage and lettuce species come in many colourful varieties, making them a popular choice for foodscaping.[3] Edible flowers, such as carnations, marigolds, cornflowers and pansies can also be used to add decoration and brightness to an edible landscape.[22]

Garden writer Charlie Nardozzi suggests that lemon, apple, plum and cherry trees can serve as edible alternatives for ornamental trees, while blueberry, elderberry and gooseberry plants can substitute decorative shrubs such as roses, hydrangeas and privet hedges.[23] Alpine strawberries and chives have also been suggested as suitable replacements for non-edible flowering plants.[23]

Edible landscapes generally consist of a combination of annual and perennial plants.[3] When planning an edible landscape, it is necessary to be aware that certain plants are better to suited to particular environmental conditions than others.[2] One should also consider seasonality of the edible plants being used, meaning the time of the year during which a certain species will best grow. Cool season crops require lower temperatures for growth and seed germination, whilst warm season crops are plants that thrive in higher soil and air temperatures.[24]

Retrieved from "http://en.turkcewiki.org/w/index.php?title=Foodscaping&oldid=959589092"
This website is a mirror of Wikipedia, and is not affiliated with the Wikimedia Foundation.
Categories: