The Fokker F.I (company designation V.5) was a prototype German fighter triplane design of World War I. It was an improved version of the V.4 prototype triplane. For many decades, the V.5 was misidentified as the V.4.

About the only noticeable difference between the F.I's overall appearance and the later production Fokker Dr.I examples was a subtle convex curve on the outlines of the tailplane's otherwise "diagonal" leading edge planform, leading into the aerodynamic balancing surface at the end of each elevator tip.[1] 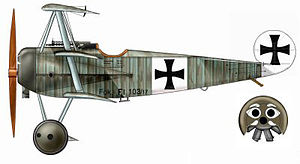 The famous Fokker F.I flown by Voss during his last battle

Retrieved from "http://en.turkcewiki.org/w/index.php?title=Fokker_F.I_(1917)&oldid=896061191"
This website is a mirror of Wikipedia, and is not affiliated with the Wikimedia Foundation.
Categories:
Hidden categories: